Share All sharing options for: Barman Aidan Demarest on Keeping it Neat

This is The Barkeepers, a new feature in which Eater roams the city meeting the fine ladies and gentlemen that work behind the bar at some of LA's hottest cocktail parlors. 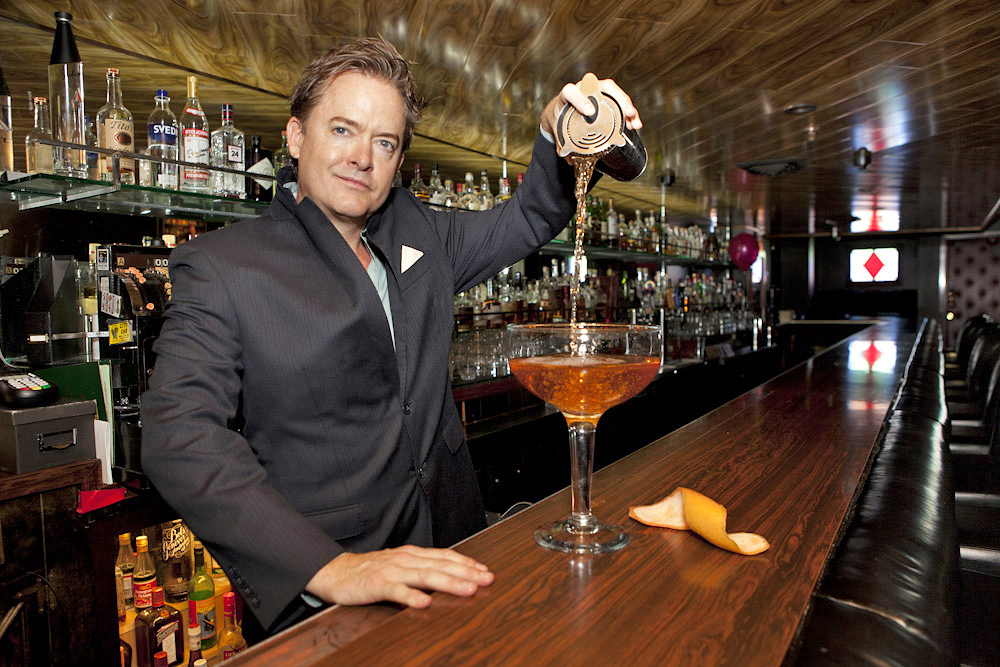 Aidan Demarest has muddled his way in and around Los Angeles with his private cocktail consulting firm Liquid Assets. Along with partner Marcos Tello, the team currently has hands on the drink lists at 1886, Casa del Mar, Tom Bergins, Bow & Truss and Demarest's one year old baby, Neat. Demarest mentions, without revealing any detail, that there are two additional projects that will soon be announced, one downtown ("I love working downtown") and one in Culver City. Demarest currently serves as brand ambassador for elit by Stolichnaya. Oh, and he also has three children, the youngest of which is eight. In this interview, Demarest talks about opening Seven Grand with Cedd Moses, how cocktail culture in Los Angeles has evolved, and what it's like to work for a vodka brand.

Let's start at the beginning. How long have you been tending bar in Los Angeles? Basically since I moved here from Boston, during my last year of high school.

A lot of people that work as bartenders don't plan on being a bartender — they just fall into the job. At what point did you realize that this was going to be your career? I don't think I've hit that point yet ... I don't think I ever stopped to think that this was my job. I've done everything in restaurants, worked as a server, a bus boy, manager, you name it. At some point I realized that I was fighting against doing what I was really good at. At some point I stopped fighting and just focused on it.

Seven Grand was the first place you opened in LA. What was it like to work with Cedd Moses? It changed the game for me, he's so passionate about Los Angeles in particular, and it changed my perception of the quality of an LA bar, and what it could be. Back then, [LA's] reputation was that we are all looks and no substance and he changed that. He sold me on the whole project.

How was it received? Seven Grand was a hit right out of the park. It was perfect timing. It was a bar with no food, accessible and easy with great drinks. It's the least commercial project I've ever done and the most immediate success. You have to understand that there was very little fanfare for bars then. There were very few cocktail writers. There were people covering restaurant openings, but almost no one cared about a bar that opened without a film premiere or red carpet or celebrity owner. It was a game changer for bars across the city — no one has opened a bar the same way since.

Neat is your first bar. How long were you wanting to open your own place before Neat came along? Right before Neat came along I thought I would never own a bar. People had asked me for years to be a partner or part owner and I would say no. Last year I was still working at the Spare Room and lots of exciting stuff was happening and this little bar came up and it was cheap and available. I always said if I ever opened a place it would be cheap and neat. I just want a bar and good spirits and that's it. So that's what it is, a train car with a wall full of liquor and red stools.

How does it feel now, a year later? Neat will be a year old on October 14 and it feels good. Now I get it: I don't have to bounce ideas off of anyone. If I have an idea for something, I just make it happen, it can happen the next day. But I don't recommend it, I don't ever recommend opening a place of your own to anyone — you can really lose your shirt. I have a lot of other things going on, other projects. I'm definitely a bartender who made good, but I always tell people not to put their eggs in one basket. I made sure I had an insurance package. I'm glad I did.

Is it hard to get a seat at Neat? No, no reservation necessary. It's Glendale, so that's one thing. But it's interesting, the flow here. Month to month, day to day, it's a great space. I wasn't used to being in a community like this, I was used to Hollywood. Here, people show up after work at 5 p.m. Then they go to dinner and then another crowd shows up at 8 p.m. Then they go home and then the people I know from Hollywood, or even the Westside, they show up around 10:30 p.m. Week after week I have people that show up from Santa Monica.

So you have your fans? It's not only that. It's that drinks travel. People actually care about what they're drinking. They're looking for the experience.

What can you get at Neat that you can't get anywhere else? We don't have a cocktail list, so nothing in that sense, but really spirits knowledge. Well, and I'm a judge in the San Francisco World Spirits Competition so I have a fairly excellent stash of booze. [Excitedly] I can guarantee that there's always something in the back, something that's about to break out on the market but I have a bottle of it before it's come out commercially. My regulars know to ask if I have anything special in the back. Mostly what I'm excited about are the bootleg tequilas that haven't arrived in the U.S. yet.

Are you doing any mixed drinks at Neat? [Chuckles] Yeah, that's the thing. Neat was not ever supposed to be a cocktail bar ... but it will always serve cocktails. We can't help it. The staff ended up being guys who wanted to pick up a shift, and they're coming from the best cocktail bars in town and so of course if someone orders a cocktail ... but if they order a Jack and Coke, the whiskey will be served in one glass with a glass of ice and the coke served on the side.

What do you do if someone orders a Cosmopolitan at Neat? Well, I don't hate Cosmos. To me, it was the gateway drug for the cocktail movement. The whole "Sex and the City" thing got people to start to think about drinks. Suddenly, they weren't ashamed to have a drink or to hold a martini glass. And ten years later, it was the precursor to Mojitos and then Caipirinhas. So, if someone orders one at Neat, we'd try something with them ... do they like clear spirits? A Cosmo is basically a sour, stirred drink served up. Just to get them to taste something new, I try to get my bartenders to talk them into gin instead of vodka.

How long have you been with elit by Stolichnaya? Just this year. And it's great. It brings me full circle. Bartenders get tired of vodka, but that's the thing about vodka and cocktails. I've always said cocktails are inclusive not exclusive. Vodka is what most people like because it's easy. It's a starting point and a fact: LA is a vodka town.

You've been all over the country and Europe, tasting, demonstrating, judging. So, what's next for the cocktail movement in LA? This is a question I get asked a lot, and for the first time, I have to say that I think LA is ahead of the country. I spend a lot of time traveling all over and what we have in LA is personalization. Every bar and each bartender has figured out spirits, glassware, technique — we know just about everything. So now they're on that level of innovation. I would say Tiki drinks, but it's LA and we've always had Tiki. So what's next is really the innovation that we're going to see here in LA before we see anything like it in London or New York. I know it because the 20-somethings in this town are better drinkers than the 30-somethings and 40-somethings. They know the difference between a fizz and a smash. They're pushing the bar movement forward. LA in this past year has arrived.