Share All sharing options for: Brittini Rae Peterson and Gabby Mlynarczyk of ink.

This is The Barkeepers, a new feature in which Eater roams the city to meet the fine ladies and gentlemen that work behind the bar at some of LA's hottest cocktail parlors. 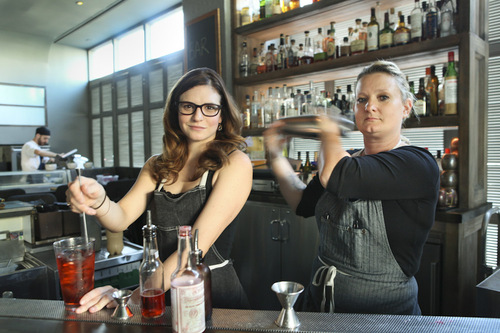 Elizabeth Daniels 11/12
Early on a recent Wednesday night, Michael Voltaggio came out from his kitchen at ink. to inspect some chili threads behind the bar. He smelled a jar of something brown, dipped a straw into a drink, smiled just a tiny bit, and then moved on. Meanwhile, his two head bartenders, Brittini Rae Peterson and Gabriella (Gabby) Mlynarczyk mixed drinks, stocked swizzle sticks and took orders. It may be the middle of the week, and ink. may now be a year old, but the restaurant from a Top Chef winner is still hot.

The bar at ink. juts out like an obtuse peninsula at the front of the restaurant, while its shelf of back-lit bottles of liquor catch the eye. They are unusually shaped bottles of—not your every day vodka and gin—small batch, organic or otherwise hard-to-find spirits. The drink menu, like the food menu, does not name dishes, but emboldens the leading ingredient in the drink: Mezcal, Japanese single malt, spiced rum, nigori sake.

Ink.'s two head bartenders are equals just as much as they are opposites. Brittini comes from a background in the entertainment industry, which brought her to LA. She opened up SoHo House West Hollywood, Fig & Olive and the now defunct Tar Pit. Meanwhile, Gabby is a trained pastry chef, and applies this skill set to her work behind the bar. She was most recently the bar manager at Eva.

Why do you think there are two of you, two head bartenders?
B: It was an evolution. There were some transitions between bar managers and at some point Chef stepped in and just said, ok, you guys are it.
G: Brittani was already here when I was hired, and I think we compliment each other.
B: I really love classic drinks, prohibition era stuff. I take a classic cocktail and just try to reinvent it. But Gabby is more creative, more out there. She makes the crazy stuff, and I make the simple drinks. But that's what works, that's what keeps it interesting. We play off each other a lot.

What's different about working at ink., compared to other bars you've opened or experienced?
B: The people are excited. I love that when everyone walks in the door, everyone is excited to be here, they want to be here. People are more adventurous here than at any other bar I've worked at ... they don't always know what they want, but they come in with the expectation that whatever it is, it's going to be good.
G: And they trust us. For the most part.

What's the wait for a seat at the bar on a Friday or Saturday night?
B: Fridays and Saturdays are the busiest nights, but it depends on the time. If you come in around 6 p.m. or 9 p.m. you'll probably get a seat.
G: After 10 p.m. it can get really busy too.

Do you ever get requests from diners for you to pair cocktails with the tasting menu?
G: Yes
B: Yes, from time to time.
G: There's one pairing that's really great right now: it's the Mezcal (floc de gasgone, celery, lemon, cucumber) and the beef tartar.
B: A guest randomly ordered it one night and was going on and on about how good it was together so then we all had to try it. It just works.
G: The celery in the drink goes really well with the tartar's horseradish snow.

Does Chef ever have some kind of leftover ingredient that he'll ask you to use up behind the bar, in a drink somehow?
G: Sometimes. One night he came over with watermelon cucumbers, but usually I just go into the pantry and steal stuff that looks good.

How else does Chef influence you in creating new drinks?
B: Chef's favorite drink is the Penicillin. Since I've worked here, he's always asking for something like that, some new take on it. So I came up with the Japanese single malt (ginger, yuzu, honey, peat). It's now the second best seller on the menu.

What's the most popular drink on the menu now?
B: Right now it's the Tequila (jalapeño, passion fruit, lime, mescal).

What are you working on right now?
G: I get inspired when I cook at home. So I was making browned butter banana bread the other day, and came up with this Browned Butter Banana Rum that's going on the menu next week. I make the rum base by taking the solids from a batch of browned butter, mixing them with fresh banana and then blending it with dark rum. I age it for a couple of days before making the drink.
B: I've got this new take on an Old Fashioned that I'm working on, with sortiledge instead of syrup. It's a Canadian spirit that I couldn't find, so I made some myself, it's basically a cold infusion of maple syrup and high proof whiskey.

Do you ever get any strange or annoying requests?
B: I dislike it when people don't know bar etiquette. There's a difference between a kitchen and a bar at a restaurant. Rarely to people just tell their server they want something that they don't see on the menu. But anyone can order anything at a bar. But that doesn't mean they always should. Recently, someone asked us for a cocktail without sugar.
G: Why would anyone even want that? That's like asking for steak without salt. People also ask for non-alcoholic cocktails, and that's usually fine, but sometimes they are very particular about it.
B: ...But it's not like when someone makes a reservation and says that they're vegetarian. Then Chef has time to prepare for that. But we will often get the order and then have to figure out how to make this or that drink without sugar or without alcohol.

What do you think is the future for cocktails in LA?
G: I think cocktails need to be more accessible. I've seen cocktails with lower alcohol points on menus, some at Son of a Gun, and I think that's good. That gives people more opportunity to try different things. I'd like to see us play around more with presentation...
B: Well, it's not going to get any worse. The people behind the bars here are passionate and are a real support group for each other, and that's going to help us all get better at what we do.
·All ink. Coverage [~ELA~]