For Cocktail Week 2012, Eater sits down with a designer of various bars and lounges around L.A., whose trademark style is perfecting the use of old furniture and design pieces and re-purposing them in all-encompassing spaces. 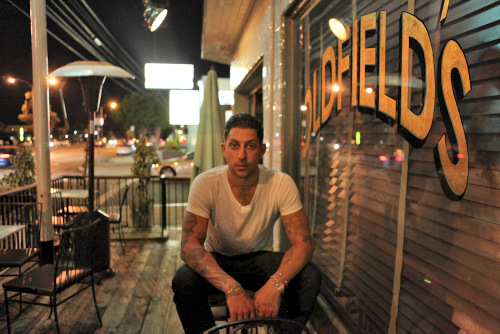 In a back storage room in Santa Monica, next to an alley off Colorado Blvd, there's a pile of old furniture and dusty knick-knacks waiting to be restored and put to use. There's a massive, faded old painting leaning on the far wall while vintage lamps and side tables await new life. Matt Winter and his assistant have collected leather club chairs from the mid-century, antique pieces that will be scoured and re-finished, fortified for regular use at a new private, members-club just a few steps from the beach. The place is being gutted out and carefully crafted together by Winter as a Colonial Spanish Revival called 41 Ocean, appropriate for the style of building in which it will reside. This year's Stone Cold Stunner Winner at Sassafras, Winter has previously worked with various 1933 Group locations such as Bigfoot West and here at Oldfield's Liquor Room, where he takes Eater through the East Coast-inspired bar, and talks about his overall design approach. 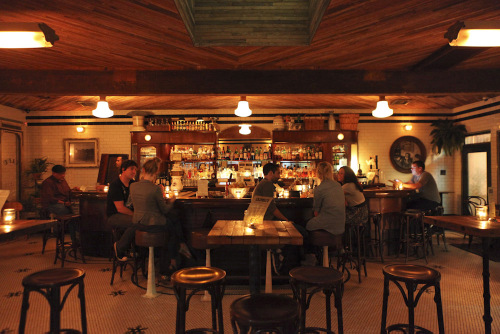 How did you get into interior design? I've always been involved with design. My mother, who's actually helping out with the 41 Ocean project, designed every home that we've ever lived in, specializing in early Spanish Colonial style. Years ago, my brother and I started a clothing line called Mr. Winter. For every trade show, I would build the booths myself to save money, and most people came by the booth at the shows were more interested in the design of booth than the clothing line. One of my friends, Bobby Green, who owns part of the 1933 Group decided to hire me to help design Bigfoot West. It was the first project I participated in. Shortly after that, we did Thirsty Crow in Silver Lake and helped put together La Cuevita in Highland Park. 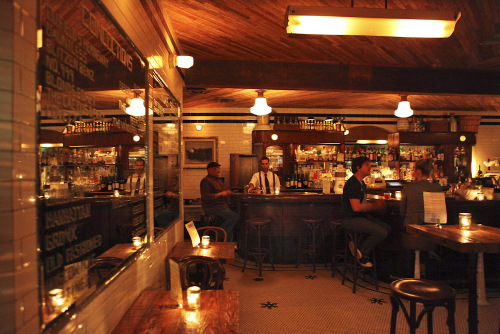 How far are you into the build out at 41 Ocean? Right now we're about three weeks into this project, which is mostly in the demo phase at the moment. The former restaurant was a modern Asian restaurant, which didn't fit the space at all. When I looked at this place, I thought California Hacienda "rich guy." I have the most California pride out of anyone I ever met. Our family has been here since the 20's and I surf every day. After doing an East-Coast design at Oldfield's, I wanted to do a project that really represented California. We're gutting the faux-finishes and out-of-place pieces and transforming it into a something that really fits much better.

What's your process when it comes to designing a space? My business is 100% word of mouth. I want people to have a good understanding of how I work, which is very unorthodox. I'm not a "design college kid." I have no interest in "the way you're supposed to do things." You can't ask an artist what color they're going to use on the right. When it comes to that point, you're going to figure it out. We have an organic flow on how we design. A lot of people have a hard time understanding that process. I'm not out there looking for every job, just the right job. That's what makes our spaces look so different and real. There's a lot of bars and restaurants that are attempting the "old-timey" vibe. But you can tell when places aren't. You can see when they dry-brush and shellack walls.

Which bar & lounge designs do you like and which ones don't you like? I love the Edison because it's a big middle finger against every detractor who said it wouldn't work. It's so big and unnecessary but it's awesome. I like Pour Vous as a space, but there are a lot of places that aren't quite authentic. Most people won't notice these places but it really bothers me. I want every space that I do to be real. I want all the pieces to be real and thought out, from the light figures to the chairs. It's not necessarily more expensive, it just takes time. Most designers will just order everything from a catalog. Restoration Hardware and Rejuvenation make it pretty easy for many designers to put spaces together. I've been on every website and seen every catalog - it would make my job a lot easier. But old pieces have a story, a history that you want. It helps deliver the message of my style, which is eclectic and Old World, using the antiques to tell a new story for these new businesses. 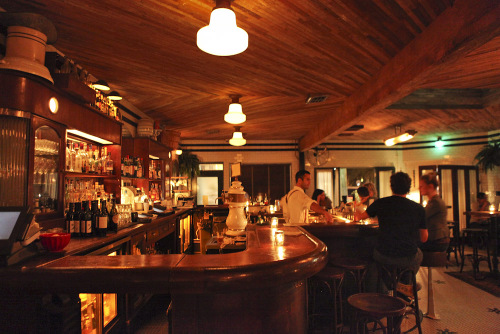 Which places are you most proud of? Oldfield's and Sassafras. We did so much work at Sassafras, it took twelve months and there were so many people involved. Because it's such as large space, you're dealing with direction and start second-guessing yourself.

What's the most important quality for your approach? I think that having a sense of the focus pieces is very difficult to hone in on. Because so many pieces are so cool, you have to have pieces that take the stage. Editing is a big problem especially for designers. Simplicity and negative space is a beautiful thing and sometimes difficult for me. Because all these old pieces are so cool, I want to include everything but have to cut down. If you look at Oldfield's, it's actually very simple, clean, with beautiful lighting. The bar is actually three different vintage bars pieces put together. The ceiling treatment is so simple but beautiful when you look at it. It's all 1930's tile and it comes out the walls in old houses.

What's your take on all the design coming out of restaurants and bars today that look "vintage" or "weathered" or "industrial chic"? The biggest problem for me is - how do you stand out? With the whole reclaimed look, we're trying to make environments that look like the real deal. When people use raw material and reclaimed wood for a gastropub, they all start looking like Starbucks. It doesn't matter what light fixtures or sinks you use, it seems. For me, we're creating environments that make you feel like you're in that time or that era. Every thing for me matters, from the sinks to the urinals. I once went to this 'secret bar' on the Westside that had a door handle that was brushed aluminum and you can immediately tell that it's not authentic. And when you step into the bathroom, it looks like a bathroom at a gas station. It just doesn't fit. If you're going to go for the old-timey look, go all the way. We're using old sinks, old mirrors, old light fixtures. It will take the experience to a whole other level, even though most of the time, people won't care. For me, I'm keen on making sure a bathroom looks great. 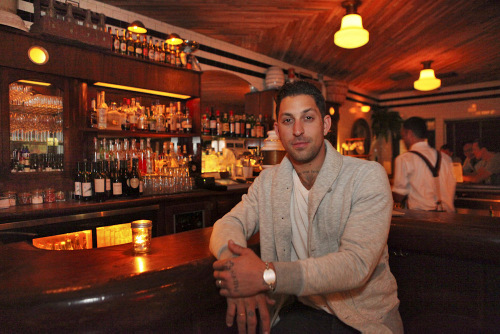 What does your house look like? It's all antiques, a lot of club chairs, insane Persian rugs, a few taxidermy pieces. Everything is from before World War II, even the stove was originally built in 1938.

Winter pulls out a photo on his iPhone of a refinished club chair, a former pink fabric chair from the 1940's that's now covered in leather. Although the chair was ugly, Winter knew that the bones of it would be of excellent quality. After pulling off all the upholstery and attaching some new arms, the piece will be ready to sit inside a lounge at 41 Ocean. The old becomes new again.