From Farm to Glass with Matthew Biancaniello

Share All sharing options for: From Farm to Glass with Matthew Biancaniello

Summer hasn't quite left the warm, sunny autumn morning in Santa Monica. There are pushcarts and baskets everywhere – chefs, serious home cooks, farmers all churning and bustling at possibly the best farmers market in town. It's Wednesday at the corner of Arizona and 2nd Street, ground zero for the exchange of extraordinary fruits, vegetables, herbs, raw milk, and even fresh fungi. One of the larger pushcarts is a blue one helmed by Matthew Biancaniello, wearing a straw fedora and a wide grin despite the early call time.

He's ready for this week's haul, confident he'll get the last shreds of summer's yield while dabbling into fall's new produce. Biancaniello had helmed the somewhat arcane and unassuming Library Bar at the Hollywood Roosevelt Hotel for the last four years, working behind a high-set bar with a makeshift garden of fresh basil, stalks of Peruvian black mint huacatay, and long strands of delicate flowers. After a four-year tenure, Biancaniello is looking for a place of his own while setting up menus at various restaurants around town.

The self-taught barman sees the cocktail not necessarily as a mechanism of inebriation or the mixing of luxuriant spirits, but more as the craft of culinary creation. His former domain was once a forgotten corner at the Roosevelt Hotel before becoming the most desirable drinking den in Hollywood. The low lights and furniture are an apt spot for curious tourists, locals, and revelers looking to be amazed by some of the most unusual and inventive cocktails in Los Angeles. It was at this side bar where he taught himself using Dale Degroff's "The Essential Cocktail." He learned also by checking out other bars and observing the various spirits used within.

Matthew spent nearly $8,000 of his own money just educating himself, buying spirits and produce to perfect his technique and define his particular approach. Taking produce from farm-to-glass is now common, but he cites an early example of when he had the classic Martinez cocktail, a predecessor to the Martini, on the menu made with actual Maraschino cherry juice alongside the more available maraschino liqueur. "I didn't know much back then, but I knew that was special." 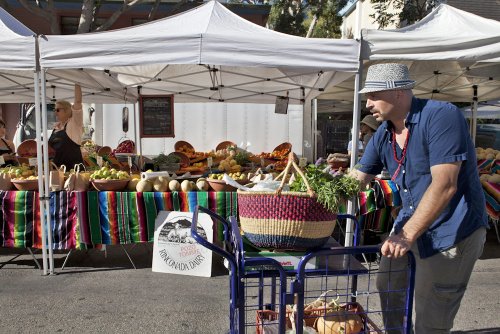 The journey starts at the Wednesday market, where Matthew takes his shifty, clattering cart and fills it some wondrous produce. He samples every batch, knowing that even one week from the same farm can have different tastes. If the raspberry or sweet corn isn't up to snuff, he'll pass for that week, hoping the next week's weather or the changing season lends itself to better flavor.

He's focused on specific farms, often asking for this particular week's portion that they've set aside ahead of time. The first stop is Pudwill Berry Farms for a box of 'golden' white raspberries - pale, ghost-like. Biancaniello proclaims the amazing maple, caramel-y flavor of a subsection of berries that has a tad more orange color. He muddles the golden raspberries with a jujube-infused gin or vermouth and fresh sage, then tops the drink off with the special orange-tinted raspberries. That box alone is $24.

There's a mandatory stop at Harry's Berries, widely known for having the best strawberries at the market (and generally the most expensive). The strawberries are an essential part of one of Matthew's signature drinks – The Last Tango in Modena. He grabs a box of Gaviotas, which he prefers for their more direct sweetness and low acidity. 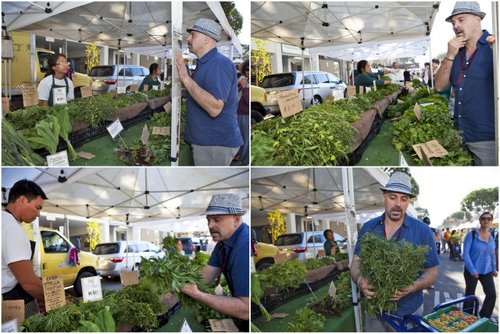 He rumbles over to a verdant stall where tacit farmers hold court over various herbs. He's here for huacatay, a tarragon-like Peruvian mint one is more likely to see at chef Ricardo Zarate's Picca restaurant. There are beautiful, purple-headed stalks of anise hyssop, which he either infuses into gin or muddles into drinks, with the raspberries, ginger, and jujubes. He sees anise hyssop as a gateway for people who are terrified by licorice flavors. 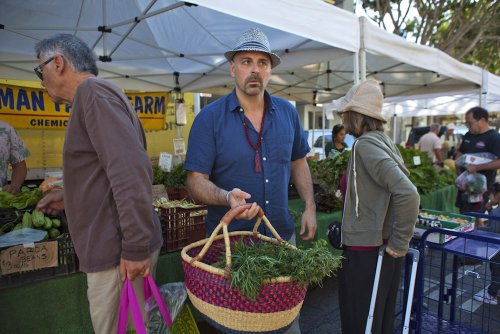 "I really want to make drinks that people are blown away by. If they're not, then I'll take it and dump it before making a new one. I want to make what people want. That's why I took away the menu and just let people order based on what they're feeling at that moment. If I put balsamic vinegar on the menu, people won't order it," says Biancaniello.

For fall, Biancaniello is divided over which pumpkin he's going to use for an eggnog drink that becomes one of his most popular over the colder months. He's inclined toward the Cinderella variety. Greeting Martha at Windrose Farms, they catch up over recipes and discuss some of his newer drinks, like one using a coffee-infused Cynar. Matthew picks over some bright red peppers, stuffing his hands with the curled ones, because of their garnish-ability over spicy drinks like his version of the Italian Greyhound, where he juices fresh passionfruit and grapefruit, shakes it with Aperol and chile-infused Campari. 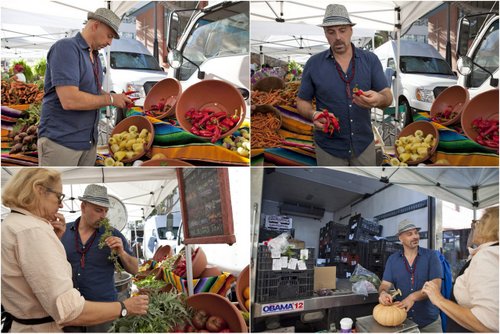 There's almost no boundary that Biancaniello won't cross for a cocktail. He's working on a sea urchin roe (uni) cocktail that's he's convinced tastes good. It'll be served in a hollowed out sea urchin, mixed with seaweed, cumin syrup, and tequila that he'll call "Fish Out of the Water."

Including other markets he visits on the weekend, Biancaniello will spend at least $400 a week. Anything more than that he has to cover out of his own pocket, which often occurs in the summertime, when produce is at its peak. "I go nuts," he claims. 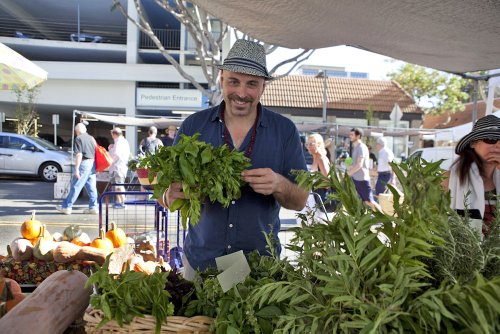 After four years at the Roosevelt, Biancaniello's grown weary of having to "move" into Library Bar every week. He keeps bottles of mushroom-infused bourbon in his Toyota Prius, as well as quince and jujube-infusions, because he doesn't want anyone else at the hotel to use them. "I'm really trying to get out of my comfort zone and explore more. To me I see this as a culinary thing. If I have my own place, I'd love to have an entire kitchen devoted to the bar and infusing all the flavors I get here at the market."
·All Cocktail Week 2012 Coverage [~ELA~]