Rob Floyd at The Bazaar by José Andrés

Share All sharing options for: Rob Floyd at The Bazaar by José Andrés 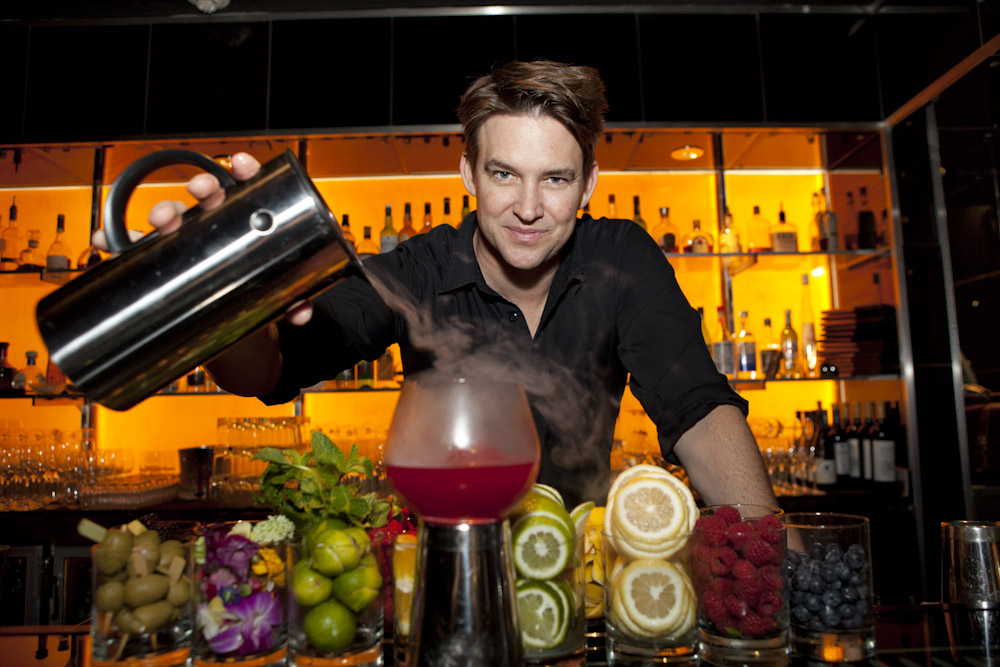 Bar Centro, inside The Bazaar by José Andrés at Beverly Hills' SLS Hotel is still, after three years, a spectacle. Not only because of the Philippe Starck design, or the crowds that pour in, hoping to get a seat, but because of the cocktails. No one else in this city has dared compete with the smoke and mirrors for which barman Rob Floyd has come to be known. Like his mentor, the affable Spanish chef who introduces himself as simply 'José,' Floyd always seems like he might pull a nickel out of someone's ear, or a rabbit out of a hat. Originally from Jersey and Florida, Floyd settled in New York and worked for Stephen Hanson, where he learned speed and hospitality, before coming to LA to be the head bartender at Bar Marmont. He's been at Bar Centro for four years. How does he keep from revealing his tricks, night after night? We had to ask.

What are your busiest nights at Bar Centro? Friday and Saturday are the busiest nights, Thursday, Friday, Saturday. But sometimes it's most fun on the nights that are your more 'foodie' nights, I actually prefer sometimes the weeknights of Monday, Tuesday, Wednesday. Still a fun crowd, but more of a crowd that's interested in getting great stuff.

What's the wait like on a Friday or Saturday at the bar? During the first part of the night, we keep the bar open for the dining experience. As the night gets busier, the long central table is open all night, and it's always open seating. The other tables are sometimes reserved, it all depends on the night. Reservations are recommended for groups.

What's the most popular drink on the menu? There's three that are in a deadlock heat. For the ladies, the Oakason and the little peach (Oakason 16 Japanese peach, pear vodka and St. Germain, $16), the second, I'd say for the businessmen, the gentlemen, would be the Ultimate Gin and Tonic, and the third one would probably be Smoke on the Water. It has all the theatrics that José loves, great taste, great looking, loves to have with his cuisine.

For those sitting at tables, in groups, are the elaborate cocktails made table-side? Yes, especially for drinks like Smoke on the Water, we're able to make all of those types of drinks table-side, so it's gorgeous wherever you get it.

Do you ever get requests to pair cocktails with the menu? I love that, yes. It's so much fun, because they're so friendly. It sounds silly, but the food is friendly, easy to pair with any of our drinks. Like if you're working with the Philly Cheese Steak, with all of the textures, there's so many different ways you can bring out great flavor profiles. The Halle Berry, which is a Jalapeño Blackberry based drink, would add a little spice to the cheesesteak experience.

I read somewhere that Halle Berry actually orders that drink. That is true. She loves it, she loves that sweet spiciness.

What's it like, working with José Andrés? I love it. He loves cocktails. When he's here, he'll spend hours, until five in the morning, just talking to me about theory and cocktails and cocktail history and culture around the world. People don't realize, he just knows so much, and he's so willing to share that knowledge. It informs everything we do here, there's a background to it, a real reason behind the drinks. There are really so few relationships between chefs and bartenders like that.

That seems to be a trend lately. Yeah, I've been doing this for 20 years, and when I first started, you were lucky to have a fresh cut lime. And as the changes happen on the restaurant side, and customer expectations changed over the years, those demands carried over at the bar. The people that have married the best bar programs to kitchen and culinary programs are doing extraordinarily well.

How often are you behind the bar, at Bar Centro? Five or six nights a week, at least. But we have a great team here, we all support each other, we all carry the load.

Do you think there's a trend towards using molecular gastronomy techniques in cocktails? I think the demand from the customer is the same as it is for food. They want an indigenous experience that's unique to them. They might want something from the past that's modernized, or something completely new, but they want that little luxury, that personalized experience for themselves. For me, to see someone's eyes light up from that unique experience makes it all worth it.

Everyone knows the salt air margarita and the cotton candy drinks -- What's new at Bar Centro? I'm working on a line of edible cocktails. I have a full line ready for José to taste the next time he's here. Some of the time, he'll just go with it, sometimes he'll make a little tweak and then we'll put it on the menu.

What's one ingredient you feel like you can't live without lately?
Hmm, probably truffle.

In what form? Right now, dehydrating it into salts. Love working it into a truffle air, truffle always talks to me.

How many cosmos do you get asked to make in a given night? I get asked a lot. There's a lot I would classify as a disco drink. An apple martini, for example, that came out of the 70s and 80s. You can make a good cosmo, there's no problem with that. But what I'd like you to do if you're at Bar Centro is take a leap of faith. I want to smash your concept, change your perception of a cocktail.
·All Barkeepers Coverage [~ELA~]