Friends of Eater Recall Their Single Best Meals of 2012

Share All sharing options for: Friends of Eater Recall Their Single Best Meals of 2012

As is the tradition at Eater, our closeout of the year is a survey of friends, industry types, bloggers, and readers. We've already covered Best Standbys, Top Newcomers, 2012 in One Word, Best Dining Neighborhood and Biggest Dining Surprises. Now it's time for Best Meals of 2012. Readers, please add your thoughts to the comments. 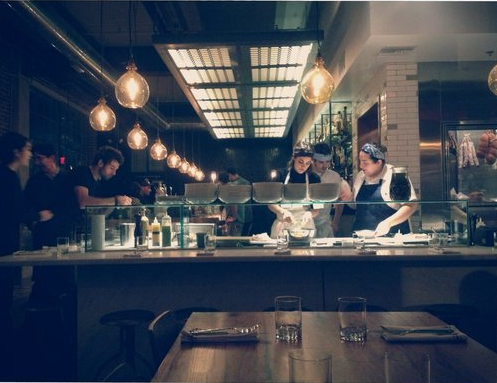 Katherine Kims, associate editor, Time Out Los Angeles: Probably because it's the most fresh in my mind (and palate), Bestia. The vibe, the wood-burning oven, the small but great wine list (and not to mention delicious cocktails), the handmade pastas, the beautiful bread and pizzas, housemade charcuterie?it's loud as hell but it's a neighborhood place, I want to eat at everyday.

Jason Kessler, Bon Appetit contributor: The "Feed Me" menu at FIG in Santa Monica. Ray Garcia is making great use of the farmers' market being steps away from his kitchen. Instead of tiny bites throughout a million courses, he serves several family-style dishes per course. It's actually the way I like to eat and there wasn't a single flop in the whole meal.

Jeff Miller, LA editor, Thrillist: I'm going out of the box: I went to Las Vegas on a guys' trip with a bunch of college friends who are all on different budgets/palates/etc. Instead of going big, we went Benihana, and, damn, was that super-fun. Ill take that over yogurt-foam-marrow anyday, if only for the company.

Brigham Yen, DTLA RISING with Brigham Yen: A sampling of the entire menu at Soleto.

Zach Brooks, Midtown Lunch: Chef's Table meal at Providence... unless I'm allowed to pick a meal I had in Maui. Because I can't stop thinking about a dinner we had at Star Noodle back in July. Did I mention it was takeout? Maybe I should stick with Providence.

Lesley Barger Suter, dine editor, LAmag: For our annual Best of L.A. issue I was assigned the category "best restaurant for an adventurous carnivore." Animal seemed so obvious, but I was caught off guard by how incredible the meal was, from fried sweetbreads to calf's brains with vadouvan to fried rabbit livers. Who knew my single weirdest meal would also turn out to be my single best.

Maggie Nemser, founder, Blackboard Eats: Unfortunately, my best meal in 2012 was the most incredible rabbit pot pie at the now closed Wolf in Sheep's Clothing pop-up, not to be confused with the new WISC brick and mortar from different chefs.

Josh Lurie, Food GPS: In L.A., my single best meal was probably at Le Comptoir L.A., back when Gary Menes was at Tiara Café. He might be the most talented chef in the city in showcasing vegetables, as evidenced by his cauliflower velouté, asparagus preparation, veggie plate and deconstructed sweet potato pie. Out of town, my top meal was definitely at The French Laundry. It was a spectacular, no-holds-barred meal at a Thomas Keller restaurant, Per Se, that inspired me to create Food GPS in the first place, and this meal topped it, from the food to the setting.

Esther Tseng, e*starLA: Just one? A private dinner party in Bel Air catered by Gino Angelini. A close second was a wine dinner in Heirloom LA's Salon in Eagle Rock. The Farewell to Foie Gras 8-course at Melisse was also pretty memorable.

Matthew Kang, contributor, Eater LA: After being turned away from Short Order's opening night, we found ourselves after hours at ink. We had a five course dinner, all personally prepared and served by Michael Voltaggio. Hard to beat that.

Daniela Galarza, contributor, Eater LA: The Ledbury in Notting Hill, London. In LA, probably the biscuits at The Hart and The Hunter.

Kat Odell, editor, Eater LA: It's hard to pick just one. In Los Angeles, either a meal I recently had at an unnamed underground Burmese restaurant in the SGV, or a dinner with Handsome Coffee Roasters at Heirloom LA's The Salon. Or maybe chef Benadicto Gell's Mangu pop-up which took over after Wolf in Sheep's Clothing decamped from Capri. In NYC, had a flawless meal at The Nomad over the summer, and not long ago had a pretty epic feast at Mission Chinese. Such a fun restaurant.