STUDIO CITY— Looking to win over the heart of a mobster? Check out Ombra's Godfather Cooking Class on February 12 at 10AM. Chef Michael Young teaches guests how to prepare Braciole, Meatballs and Sunday Sauce, Mostaccioli, and Sicilian Cannoli. Class costs $99 per person or $169 per couple. [EaterWire]

WEHO/DTOWN— Collier Ulrich's Marcona sandwich shop has been all kinds of delayed (electrical issue), though now should open at the end of February. [EaterWire]

OUT COLD— Jesus. This opener just says it all: "A top Los Angeles County sheriff’s official was arrested on suspicion of drunk driving after she was found stopped in the middle of the Foothill Freeway passed out with her head on the steering wheel of her county car, officials confirmed." The Rest. [LAT]

MID-CITY— On February 22 at 7PM Mezze teams up with OC's The Bruery for a four course dinner priced at $85. Mezze chef Micah Wexler will pair plates with four of The Bruery's most limited edition beers. 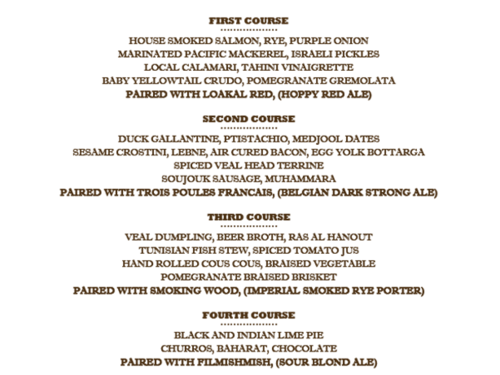 Newcomer Loquat Is Brewing the Future of Coffee in Cypress Park