Sang Yoon Looks Back on Year One of Lukshon

Share All sharing options for: Sang Yoon Looks Back on Year One of Lukshon 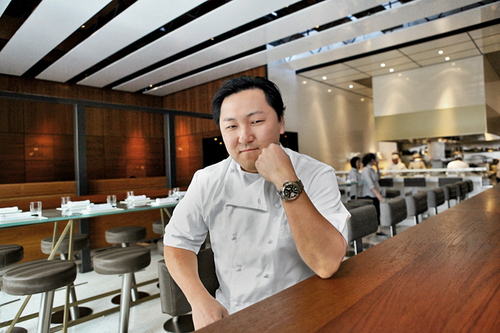 For years chef Sang Yoon was revered as the king of Los Angeles' burger scene thanks to the success of Father's Office 1.0 and Father's Office 2.0. Looking to expand with a new concept, in early 2011 Yoon debuted Lukshon, a sleek and modern number focused on the exploration of Southeast Asian flavors typically associated with street food, but here elevated to haute cuisine. Located on Helms in Culver City just next door to Father's Office 2.0, from the get-go critics and diners entered Lukshon with high expectations, and last May the LA Times granted the restaurant one and a half stars. We recently spoke with Yoon about how the concept was born and changes along the way.

When was the first time you thought about opening Lukshon? About two years before it opened. I’ve always loved Southeast Asian food but was not interested in recreating the casual, street fare it’s known for. What I found so compelling about flavors from that part of the world is how they all share the same crossover of ingredients from colonization—Dutch, French, Portuguese, etc—and I thought they could be interpreted with more nuance and precision. That’s how the Lukshon concept was born.

Did the concept stay the same from inception to launch? Pretty much. I wanted to portray SE Asian food with a modern sensibility but sourcing authentic ingredients proved to be difficult so we had no choice but to start making some of those items in-house and our menu certainly evolved a bit from that process. Housemade sriracha packs quite a different punch than the bottled variety.

How did the build-out go? Build outs are always trying but luckily the space was literally in our comfort zone adjacent to Father’s Office 2.0 so being familiar with the building was invaluable. Openings are always hectic but our staff was really well prepared and GM Laurie Pesce had us all really well organized.

Did you bring over anyone from Father's Office? All new hires with the exception of a couple people. We brought over a couple of staff members from FO to help with our bar program as well as to help support the opening. Then I made Chef Ted Hopson our Executive Chef of both FO and Lukshon.

How do you think the success of FO has affected Lukshon? Hard to say really. We have so many regulars who are fans of the non-Burger dishes at FO and I think to a degree, those menu items and the Lukshon dishes share a similar flavor-forward, composed sensibility and people were willing to crossover which has been successful. Or maybe women started to put their foot down about proper table service on a date and now Lukshon followed by FO is the way to go.

Did you have to make any changes after the first month? The biggest change was the menu formatting that we tweaked, but that was nearly nine months after opening. I was reviewing the ordering patterns and discovered people were ordering more of the smaller items which seems to be the way people are eating these days. The dining public seems to be interested in sampling lots of little dishes rather than following the formalities of traditional menu formats. So that change has been very positive. It also challenges us in the kitchen to shrink the size of our canvas. To create dishes that are better edited and more focused.

How did the LAT 1.5 star review affect business? Impossible to say with any certainty. Reviews come out so quickly these days and they all seemed to come out at once. The LAT review wasn't my favorite one but we got some really great reviews from both Jonathan Gold and Brad Johnson around the same time. The feedback from your own patrons is the most important and that's been extremely positive so far. We have definitely seen a steady building of regular patrons which is always the best vote of confidence.

How is business these days? We’re fairly robust most nights and lunch has been extremely successful since we debuted it back in the fall. I draw the line at brunch though—there will not be any Sambal scones. Ever.

How has the restaurant changed over the last year? As with any endeavor, with more experience, you hope to get better and I believe that's certainly the case with Lukshon, just as it was with FO which is definitely better than it was 12 years ago. Looking back on this past year, I get to reflect and get a better understanding of my own perceptions of the project. The opening of Lukshon really reminds me of when I first started FO. It was a new take on something familiar and it took a while for people to understand it. Including me. But with continued hard work and devotion to improving ourselves daily, I hope to continue to evolve in a positive direction.

Does it feel like it's been a year? Some days it feels like its been five years and other days, it seems like it’s still brand new. I really love how far we've come this year and the progress in so many areas we've made. This is a tough business to be in especially in tough times, but I love what I do so I'm really looking forward to the year ahead.
·All One Year In Coverage [~ELA~]
·All Sang Yoon Coverage [~ELA]