Bryant Ng Looks Back On One Year of The Spice Table

Share All sharing options for: Bryant Ng Looks Back On One Year of The Spice Table 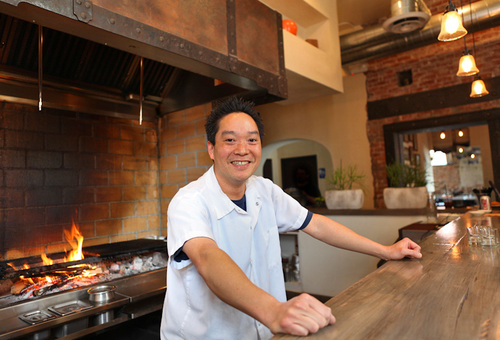 It has been one hell of a year for The Spice Table and chef Bryant Ng. Following a stint at Pizzeria Mozza as chef de cuisine, Ng and wife Kim Luu-Ng snapped up a most unassuming, rough space on S. Central in Little Tokyo, gutted it, and converted it into The Spice Table, a cozy, totally unpretentious multi-room Southeast Asian restaurant with an obvious rustic vernacular. The Goldster was a fan right off the bat (he went back for a second taste, too), SIV dropped a deuce, and just recently came the game changer. Food & Wine magazine honored Ng with the coveted title of Best New Chef 2012. Not bad and all in a year's work. Below, Ng talks candidly about culinary inspiration, how it all came together, and future endeavors. >>

When was the first time you thought about opening The Spice Table?I've always had the intention of opening a restaurant since I changed careers and began working in the culinary field. My grandparents opened a Cantonese-Polynesian restaurant called Bali Hai back in the 60s in Santa Monica, and my parents had a Chinese restaurant in the Valley. You can say that I was bitten by the restaurant "bug" pretty early on. Regarding The Spice Table, I've always wanted to integrate the favors of my Singaporean heritage in my cooking but never had the opportunity because I worked professionally in French, Italian, and Mediterranean kitchens. So when it came time to open my own restaurant the style of cuisine was obvious.

Prior to The Spice Table, what are some of the restaurants that you worked in? Moving backwards, I was most recently at Pizzeria Mozza. Before that at Daniel in NYC, Campanile in LA (where I first met Nancy Silverton, my mentor), and La Folie in San Francisco.

Did the concept stay the same from inception to launch? It did. The idea was to keep it casual during the day with a quick service service model, and sandwiches, salads, and sides as the major offerings (I've since added rice dishes). I really wanted to cater to the working crowd during the weekdays. To give something tasty, different, and affordable. And to remove some of the formality of "table service" dining during the day which allows for more affordable prices. At night the menu is very different, a little more composed. And, of course, we have table service. It's like having two restaurants in one.

How did the build-out go? Rough. We ran into the typical catch-22s at Building & Safety: one arm of the City says one thing, and the other says something else that contradicts the first. You then go back with changes and hope it doesn't happen again, inevitably it does. I hear it's more streamlined these days...

Yikes. Did you have to make any changes after the first month? We weren't open for lunch the first month because of some issues with the City regarding the hood above the baking equipment. So, at around the one month mark we started lunch. It was like opening a new restaurant with a different kitchen and service style. It was crazy and exciting at the same time. But we have a strong team so we were able to figure it out relatively quickly, all the while trying to make our dinner service more consistent.

What changed six months in? Things were moving forward steadily six months in. Generally restaurants have a lot of employee turnover, but we were holding onto the majority of our opening staff at that point. It was then I knew we had something special. The restaurant business is all about people. The people you serve and the people that work at the restaurant. If you have a good balance of both you have something great.

How has the menu has evolved over that last year? The philosophy and inspiration remain the same. However, I've found that a lot of our guests have pretty adventurous palettes. From a Chef's point-of-view that's awesome because it takes away some constraints. I can serve dishes I find tasty like tripe, pig's tail, and lamb hearts, and be able to sell them and not have to sit on product. Also, from day one, because of our adventurous customers, I've never had to dumb down the cuisine and sacrifice my soul.

How did the two star LAT review affect business? It was great. Thank you LA Times. We still have people coming in and mentioning how well written the review was. As with any positive review there's an immediate spike in business, the idea is to keep it going by being consistent with our service and food.

How does it feel to be recognized at a Food & Wine Best New Chef? Even before I started cooking professionally I always read the Food & Wine's Best New Chefs issue. Most of the Chefs I've worked for were also Best New Chefs themselves. And to now be part of that prestigious family is a huge honor. It's a chance for me to motivate myself and my staff. I also hope it's inspiration for other young chefs out there. The Spice Table is really just a mom-and-pop shop with a lot of soul. I don't have a huge budget to pull out all the expensive flourishes or equipment, I don't have big name backers, I don't have an army of PR people behind me, it's just a lot of hard work and putting that PR on the plate.

Has business changed in the past few weeks? It has definitely picked up. We have people coming in saying "congratulations" so I know it's directly related.

Are you surprised by all the success and positive press thus far? Surprised by the reach. Before I opened The Spice Table, the intent was that we would just be a neighborhood joint. We would do soulful food consistently, provide a good vibe, and good service. Now I'm glad that we have people coming from all over. From the Westside, San Gabriel Valley, Singapore, Malaysia, different cities in the US, etc. It's awesome to see people come in from Southeast Asia and literally start to cry having eaten something that reminds them of their mother, family, or their home so far away. It has happened a bunch of times, I shit you not. It's also great to see many restaurant industry people come in, other chefs, cooks, BOH people, FOH people, media, critics from all over the country. That's the ultimate compliment because it means that people I respect and who understand food really get what we're doing.

Do you have any updates on the rail line possible being built where the Spice Table stands? The Metro Board is having a hearing today to vote on the scenario that may take over the land on which the The Spice Table sits. Even if they vote to move forward with this scenario they still do not have the money to build. It's a $1.3 billion dollar project, they need a lot more of that. And judging by their initial estimate of $700,000 that $1.3 billion may inflate even more by the time they start building. Curious to see what it will cost in the end.

What will you do if you have to move? I'll definitely do something similar cuisine-wise because it really speaks to me. But the actual idea will form once we decide on the space and the neighborhood. It's a very organic process and needs to make sense for the location. I have a great team who are all very passionate about what we do and I want to make sure I will always have a place for them to work.

Does it feel like it has been a year? Judging by my white hairs it feels like many years. 2011 was the longest and shortest year of my life. There were a lot of ups and downs, both personally and related to the restaurant.

Would you consider opening a second restaurant? It depends on if I have the right staff and if the timing and location were right. I would never expand beyond my capabilities. Compromising on the quality of experience, from the food to the service, is not an option for me. Hospitality is key. If I don't have the people that are capable and that I trust in all the right places then I wouldn't do it.

What's on tap for the future? A lot depends on what happens with Metro. In the meantime, we've begun a catering arm of The Spice Table to offer our unique cuisine for private events. We just finished a gig with the UCLA Hammer museum, which was particularly sweet for me because UCLA is my alma mater. Also, we have brunch coming soon which will be served on Saturdays with table service as opposed to our usual quick service at lunch. I'm planning on doing some traditional Asian breakfast/brunch items like congee, kaya toast, wonton noodle soup, pâté and baguette with a fried egg. But also some more traditional American brunch items with Southeast Asian influences like Rendang hash, grilled spicy sausages, French toast with palm sugar syrup, grits with lamb bacon, yogurt with Southeast Asian fruits, crispy eggs with sambal, and others.
·All One Year In Coverage [~ELA~]