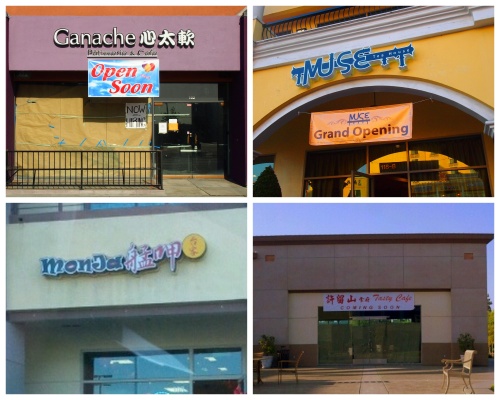 1) Monterey Park: Ganache Patisserie & Cafe has installed signage on Atlantic Blvd and is currently seeking employees. Perhaps it will be able to replace the sorely missed Fleur de Lys patisserie which shuttered last year in Monterey Park. This is the second dessert joint to open in the same plaza during the last six months. 141 N Atlantic Blvd. #102

2) San Gabriel: The defunct Hao’s Kitchen has been replaced by a tea house named Muse Tea. The new establishment is across the street from Ten Ren, the most popular tea shop in all of San Gabriel Valley. 227 W Valley Blvd. Ste 118-B

4) City of Industry: Tasty Cafe is planning a second branch at the Four Season Plaza. The first branch is on Valley Blvd in San Gabriel. It is safe to assume that the menu will feature more noodle items, and some Cantonese-style desserts. 18558 Gale Ave.

5) City of Industry: The much unloved Four Seasons is set to open another eatery. The first location in Rowland Heights, known for cheap HK cafe style grub, just opened last January. Its offspring will be a much larger seafood house with a liquor license. 18558 Gale Ave. #128

·All Meanwhile, In SGV Coverage [~ELA~]