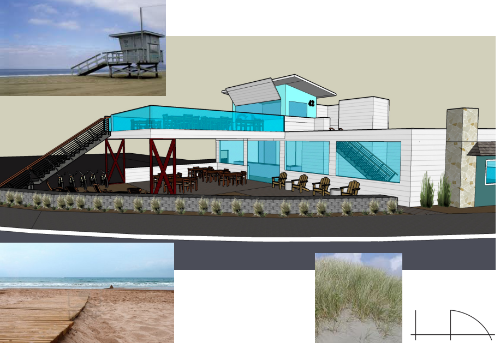 Partners Travis May and chef Mark Maier gained control of Playa Cantina, formerly The Del, formerly La Marina, on March 20, and since then they've continued to operate the Mexican restaurant as such. However, tomorrow marks Playa's final day of service (karaoke party et al), at which point May and Maier will begin to transition the space into Tower 42 over the next six to eight weeks. May says, "Playa is sorely missing a hangout that isn’t a dive bar," thus he plans to re-conceptualize the space into an American seafood haunt, offer live music three to five nights per week, and hopefully add a weekly farmers market into the adjacent beach-facing parking lot. Take a look at the before and after photos above (architect here is John P. Hamilton of Hamilton Architects, Inc. located in West LA), that second story deck is part of May's second phase of construction, due to permitting delays, thus probably won't finish until summer of 2013.
·New Owners Transition Playa Cantina to Tower 42 [~ELA~]