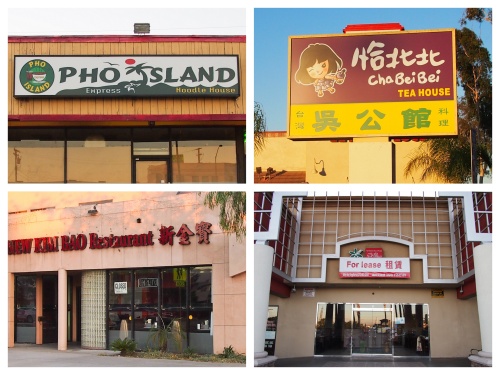 2) Rosemead: This particular branch of Quickly has decided to rename itself instead of renewing the Quickly franchise. The replacement tea shop is called Cha Bei Bei and it is still a Taiwanese tea house. 7631 E Garvey Ave.

3) Rosemead: The much maligned BBQ House is gone and the space is for lease. This was the previous site of Tofu Village, Pork Village, etc. 8118 Garvey Ave., Ste B

4) Rosemead: A Hindu temple is en route to replace New Kim Bao. Area restaurateurs and land developers faught the establish of the meditation center due to parking and economic fitment, but the city council recently approved the land use switch. This particular lot was a consistent underpeformer since the beginning of the decade, and the property owner finally gave up. We know of churches being converted to restaurants, but not the other way around. 8752 Valley Blvd.

5) San Gabriel: Milk & Honey is soon to replace BJ Tofu House. Restaurant type and menu is still unknown. There are fewer than a handful Korean restaurants left in the WSGV as Chinese and Vietnamese restaurants continue to vie for cheap lease spaces. 534 E Valley Blvd., #1