Naomi Schimek of The Spare Room

Share All sharing options for: Naomi Schimek of The Spare Room 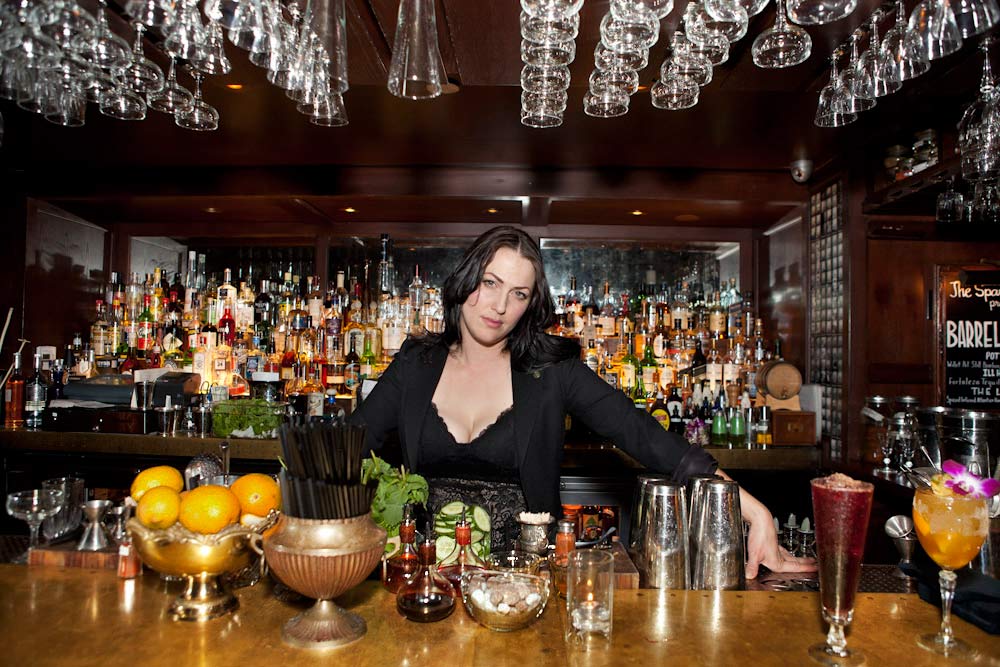 I first met Naomi Schimek when she worked at The Tar Pit, the cocktail bar that introduced the famed Audrey Saunders of New York's Pegu Club to the City of Angels. Despite all that controversy you probably have heard, The Tar Pit was an awesome bar because Naomi was there. Naomi is as fun and gritty as she is talented. If Dita Von Teese were a bartender, she'd be Naomi. So when she arrived at The Spare Room with Aidan Demarest, I was ecstatic she'd be but a few blocks walk away from my place.

Nominated for "Best Hotel Bar" at Tales of the Cocktail's 2012 Spirited Awards, The Spare Room is not only one of the best LA bars to grab a drink, but a bar with unmatched atmosphere and even recreation. Sometimes, I'll bowl by the hour in one of their vintage lanes (rental comes with $350 Esquivel shoes). I've played Scrabble and Connect Four with wooden pieces over a punch bowl. Naomi and her staff are top-notch, always making sure each of their guests is having a great time, and that's just to meet up for cocktails. Whether I'm meeting old cocktailian friends or introducing people to the bar, they always make sure that I not only have a drink in my hand, but a superb one, at that.

What do you like the most about working the front? Human interaction. Growing up, I worked in kitchens in the back. You cut and chop but you don't get to talk to anybody. Since I was shy, working the front was what brought me out of my shell. I'd be a totally different person than I am today if I hadn't started working in restaurants. You get to talk to people; you get to pick their brains. I also like the instant gratification. Geena Davis said, "I do movies to support my theatre habit." You get that instant gratification from when you're in front of everyone, more than from doing a movie. I love seeing that look wash over someone's face that says, "Oh my god, I love it."

You've been bartending since you were 21; how has it changed you over time? One thing I've learned about working the room is how to be diplomatic. That wasn't always my strong suit since I'm really into punk rock. I've worked in fine dining establishments, low-rent dive bars and nightclubs. I like that I've had experience in all different genres of service; I know how to carry on conversation with people from all different walks of life.

What is it about the industry that you could change? I don't like it when I see other bartenders get so frustrated with a customer that they vent online about him or her. I am sure that when I walk into a computer store, they make fun of me when I leave the store. But I am not going to be frustrated with somebody because they don't know the difference between a New Western and an Old Tom Gin. No matter how easy it comes to me, I always remind myself the customer is probably a brilliant doctor or expert mechanic and skillful at something that I can't do ... But when they reach across the bar and grab a cherry, then we'll talk.

Is there anything you've seen lately that has been, in your opinion, harmful to the local craft cocktail scene? Articles like 13 Things Your Bartender Won't Tell You, which tells you that "some of the garnishes aren't fresh, so if you reach over here and eat some of it, you might want to think about that." Obviously, somebody who's not a bartender made this up, and most of it is ludicrous. I'm mad about it. See, Jason Bran writes good stuff. There are articles by all these people who are not in the business.

What else? What we do, how we do it has been the only way of making drinks in America, maybe except for the past 12 years. Everything is the way it is because of Prohibition. We're finally able to reclaim our way of making drinks. [Americans] have certain things that are ours. Cocktails are our culinary tradition. Everything else came from everywhere else. But I have been noticing some anti-cocktail backlash. And I hate to say it, but I see established chefs, who have more mainstream appeal and ultimately ego, feeling threatened by successful bartenders. If their restaurant is getting recognition for the bar program, they might try to get rid of the bar program, because perhaps they don't like that the restaurant is getting more recognition for the bar than the kitchen. I'm disturbed by it. Chefs, they need to realize we're here to stay. OK, you went to culinary school, that's great – but maybe you better get over that. We bartenders apprentice each other. We go through our training the old style way. We don't have a school – deal with it. Maybe it's because we are out front, on stage, at the bar. Maybe they wish they had that instant gratification, having your audience in front of you. Shouldn't we all realize that we are all here for the client? For the customer? Isn't that why we are all here?

What are the big differences between service on a Tuesday night vs. a Saturday night at The Spare Room? Well on Saturday, it's like amateur hour. It's common slang for a reason. You might ask an industry person, "Isn't it so great working a Tuesday night?" but actually what he/she'll say is, "I'm out too." That's when our Padawans work. It's Jedi training grounds. I've worked at bars where I could serve all day – for instance, lunch at restaurants where you can casually talk to people at the bar. Here, I get a three hour window from 8-11 p.m. when I really get to converse from behind the bar, talk about a certain spirit and a certain cocktail family. I love that interaction. At 11 o'clock onward and especially after midnight – any night of the week – it's shut-down. Our crowd is a late crowd and they come in later.

How has The Spare Room evolved since your opening almost 2 years ago? We've managed to train the clientele in Hollywood now where they are coming in and asking for an Old Fashioned. When we first opened, everyone ordered a vodka soda. Now, they're ordering the classic cocktails. It's so gratifying to get to the stage where we don't even have to have [vodka-soda-like drinks] on our menu. We can just have our own craft cocktails on the menu, alone. We've not only just trained our staff, we've trained our clientele.

What's your favorite dive bar and what do you order there? La Cita. I get a shot of Mezcal and Modelo. Sometimes they don't always have it so I'll bring in a bottle myself. I was working downtown for years before Seven Grand opened and actually, Golden Gopher was first. And then I bartended at 107 for five years. I also love the Down & Out and Redwood. It's perfect for when I want to forget I'm in the cocktail world.
·All Front & Center Coverage [~ELA~]

Spare Room at The Roosevelt