Share All sharing options for: Giovanni Martinez of Sadie 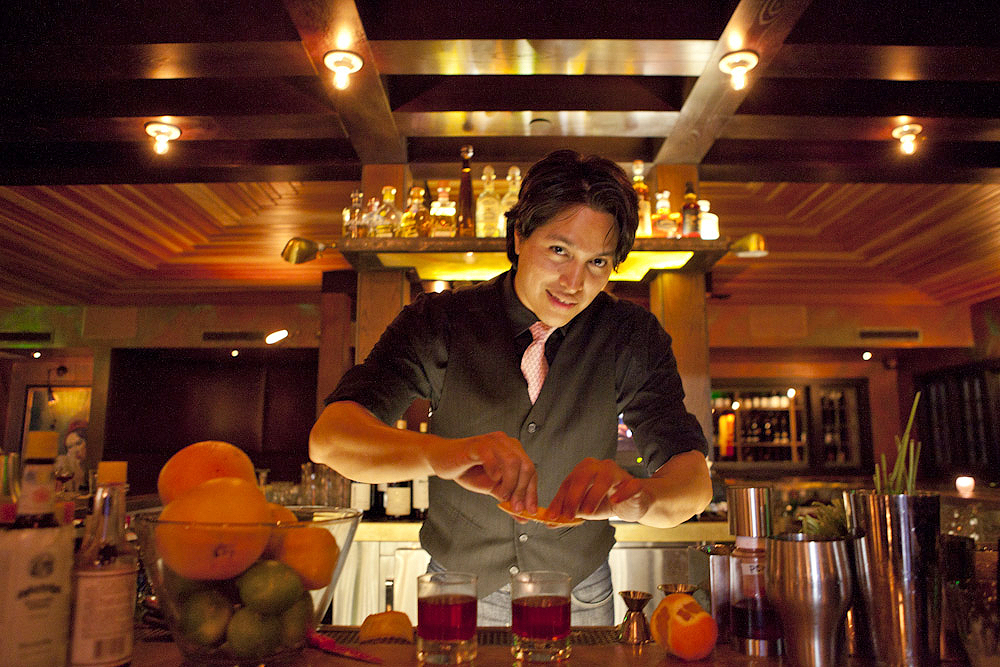 Every time I step into Sadie, I hope that Gio Martinez is there. There were a couple times where I've been disappointed, so that I'd complain to him on Twitter, just to find out that he had taken his sister to see Mamma Mia nearby or to a museum to help her out with a school project. And then, of course, I just feel like an asshole.

To give you an idea, the baseline of Sadie's cocktail program is a reliable Old Fashioned for $6 during happy hour, Tuesday through Friday, 6 ? 8 p.m. To have such a stellar neighborhood bar such as Sadie, I consider myself extremely lucky. But I say that the happy hour is a fanastic baseline because while he ensures my Old Fashioned will always be awesome, he is always making good drinks, no matter the spirit. I've seen him make my friend Roy, a former non-tequila drinker, a Margarita variation and one of the best drinks he's ever had. The best one he has ever had was the first one Gio made him.

Gio is always not only befriending his customers, but also educating them by testing their boundaries and getting them to try something different. And pleasantly surprising them. His sense of humor is no small detail, and I know that whenever I step into Sadie, I run the risk of staying longer than I ever intended to. I still go whenever I can.

So we all know that the Sadie space used to be Les Deux. Les Deux I, II and III to be exact. What went on with that? And where did you fit in? First, it was Les Deux Café, which was a French Bistro and it was very popular. Then it was a nightclub (Les Deux II), where the rights to the name were leased out before it got shut down. I got in at Les Deux III, when it was a gastropub in the front area where it's now a parlor. I met Bill Murray at Cannes and when I said I worked at a place on Las Palmas south of Hollywood, he said, "Les Deux?" I said, "Yeah – it's not a nightclub anymore," and he didn't even know it was a nightclub! Apparently, he was an investor in the first one.

How has the clientele evolved over these changes? Back in the Les Deux Estate (III) days, people would buy the space out in the back for events, and it would turn into nightclub night, even though it was during renovation. It would be a promoter, and they'd present it like: "Welcome to Les Deux, reopened for one night only!" Jason Robey, Joel Black & I would continue to do cocktails in the front. One time, during NBA All-Star Weekend, someone bought this place out and made it nightclub city back there. Customers would say, "Give me 3 Gummi Bears and an Incredible Hulk." We wouldn't know what to do. But my barback, my barback would be like, "I got this bro." Even so, at the front, we weren't going to change anything. At that time we didn't even have vodka in the front. We had two punch bowls. But all these drunk girls that were there to try and hook some rich NBA player would be in the front and totally down to drink straight out of the punch bowl, even though we were there making Clover Clubs. I love that kind of proof that you can do good drinks and have a good time and you don't have to be a pompous ass to do it.

What's the greatest challenge when you're working the front? People get apprehensive. We get a lot of people who come in and they're on the way to the club and order a Vodka Redbull. We don't have Redbull. You just got to guide them and see what they want. Sometimes people they'll walk out. But that's okay. Every place can't be for everyone. My friend Andrew Willett puts it like this: "We're here to elevate not to denigrate."

What do you like about working at Sadie? I love working here, I love working the front. We get a lot of regulars. People come back, like the neighbors. All the guys that run the businesses across the street, around the corner, they come back once, twice a week and have dinner and a drink. After I've earned their trust and have learned what they like, I like to show them something new. When they ask, "What's in it?" I'll say, "Don't worry about it, just drink it."

What are the qualities to being in Hollywood and dealing with the Hollywood crowd?It's been six months now [that Sadie has been open]. Sometimes you'll get diners who are looking to be adventurous and it's great. When we first opened, Hollywood was ? not a joke ? but if you were looking for good food and really good drinks, where would you go? So it's hard to be one of the first. Writers Room has their built-in clientele. Spare Room has the hotel, an amazing team who knows what they're doing. Naomi's absolutely amazing and Daniel at Writer's Room is amazing. And I'm sure they've had their hiccups. But it's hard to start the ball rolling. It's almost like Copa d'Oro [in Santa Monica], where that was the only thing out there for awhile. And it's not like you were going to drive all the way out there to only go there. Our main focus is showing the neighborhood that you don't have to drive to LA or the Valley to find good drinks. This is just the kind of atmosphere we offer where you can get these kind of drinks.

You've been a brand ambassador for Chivas Regal. What has that experience taught you about the FOH? It was the first time I got to fully immerse myself. I was a bartender at The Conga Room on Wilshire, and I wanted to do this right. Actually, I wanted to teach a bartending school, but thought that the book was all wrong. It was filled with nothing but a Sea Breeze recipe, and it had all these recipes with sweet and sour mix. The facts were all old wives' tales. I became obsessive about finding the truth, and why am I doing this, how am I doing this? One time, during the first couple of hours at the Congo Room, I stirred a mojito and explained why I did that. I didn't muddle the mint. Or, I'd go to work and bring a bottle of grenadine I made at home. Then I got this job [being a brand ambassador] and was sent to London to learn with Max Warner. And there were only a couple legitimate cocktail places in New York but it wasn't like it is now. I was in London and made a lot of friends and learned from them. There would of course be great hotel bars but also neighborhood bars that had fresh fruit and ingerdients in the back. They squeezed stuff by hand. I became immersed in that and got to travel and see different cocktail scenes. Shanghai had a few bars that were already doing that. It was always on the forefront. Buenos Aires was kind of the place where it never went away. They had all these distilleries there. All these amaros and stuff that bartenders fetishize now, Argentinians would be able to say, "Oh my grandpa drank that and my grandma drank that." It just never went away.

What is it that makes a bartender a great bartender? You learn from somebody else the whole road there. I've had a lot of mentors in my life; some people taught me about certain spirits, or certain garnishes. What made them all great bartenders is that they have the customer service and the house guest interaction. learned a lot from Max. For instance, if a young girl ordered a margarita, I was taught to put a little agave and a splash of pineapple – essentially, you got to read your customer. I just said, "You can change the recipe?" And he taught me a lot about how to talk to different people differently. Some people want you to ask them about their day. I learned from Max in London that we're making drinks for people but it doesn't have to be uppity. I can make you the best vodka soda ever - who cares? Patrick Doherty. Nobody works the house like he does. Somebody walks into the door, and he'll know who that is. He knows and remembers everybody's names. I remember when he left the Buffalo Club. One or two people would walk in and ask, "Where's Patrick?" They'd have one drink and then leave. Because half the people who were there would be there to talk to Patrick. They were also big wigs, like academy award winning producers and directors. With all the best bartenders, it's not just about the drinks, it's because they know how to talk to people. Joe Brooke [Copa d'Oro, The Edison, Mixology 101] makes a good drink but that's not what puts him, in my opinion, above most of the other bartenders in the city. He is a charming nice fellow. With some people he's going to be nice, others he's going to bust their balls, but it's because he knows that we're all having a good time. And that's how we find the people we want to hire. They don't have experience with craft cocktails but every guest really likes them. They know how to talk to customers. If they mess something up, they know how to apologize for it. You can't teach that. I can teach them what goes into a bourbon, or what goes into a Manhattan. But I can't teach how to make people like them. That's what you really go for at this stage. I can teach you everything else. Besides, everyone can follow a recipe.
·All Front & Center Coverage [~ELA~]