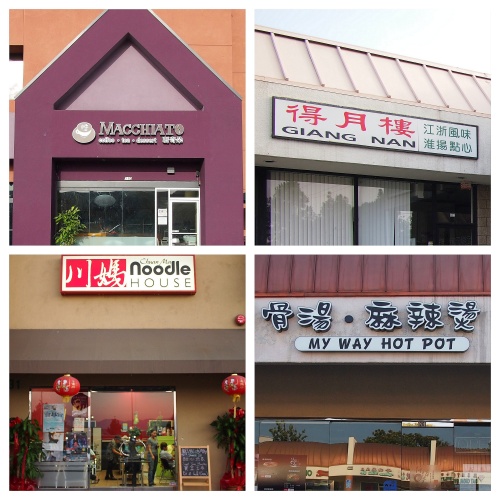 1) Monterey Park: Macchiato opened this month and is currently featuring award-winning Klatch espresso beans. Operator Jason Tsai, a corporate trainer at the boba shop franchiser Lollicup, explains this outfit was a long time dream and the closure of the previous Cantonese dessert shop presented the perfect opportunity. Here, the drink menu is part Urth (green tea latte with kawaii latte art), part Half & Half Teahouse. The highlight of the food menu is Liege-style waffles, and a Bruxie-inspired beef roll waffle sandwich is available, too. 141 N Atlantic Blvd., Ste 110

2) Monterey Park: Giang Nan, the Shanghainese mainstay in Monterey Park, recenly closed escrow and is scheduling a shutter remodel. Mr. Gold approved of its rice balls back in 2005 but the business was for sale since 2011. Apparently the $3.50 lunch specials could not extend the restaurant's shelf life. 306 N Garfield Ave.

3) Rosemead: Hunan Seafood Restaurant applied for a 41 liquor license last October, but met severe resistance during city hearings. It was denied the CUP in January as the city discovered there were plans to turn the back of the restaurant into a hostess bar. This site previously operated as The Rose Room, a night club constantly clipped by the sheriff due to violence and homicides. Record shows Mr. Tan Lan requested several public hearing extensions and appeals, but it looks like ownership has given up as their lease is about to end without a renewal. 8772 Valley Blvd.

4) Rowland Heights: After operating without a health department permit for over a month in June, Chuan Ma was shut down on July 16. The menu here is mostly Sichuanese, with a bit of clientele-inspired Taiwanese shaved ice and tea house items thrown in. Beef noodle soup here sports gloriously long and thick knife-shaved noodles and is, of course, available "big spicy." For those who weren't able to make it here during the one month pop-up, fear not: Chuan Ma has since reopened and awaits inspection. 18438 Colima Rd Ste 31

5) Rowland Heights: Aburaya Tonkatsu & Noodle House is gone after half a year. It's difficult to imagine a dual purpose ramen house / pork cutlet shop suffering during the second Ramen Renaissance of LA, but the area competition (there are five ramen shops in the vicinity) proved too much. 17863 E Colima Blvd.

6) San Gabriel: My Way Hot Pot opened during the middle of an LA heat wave. It replaced a rather similar shabu shabu restaurant. 1261 E Valley Blvd.