Share All sharing options for: Eric Rosenfeld of Il Covo 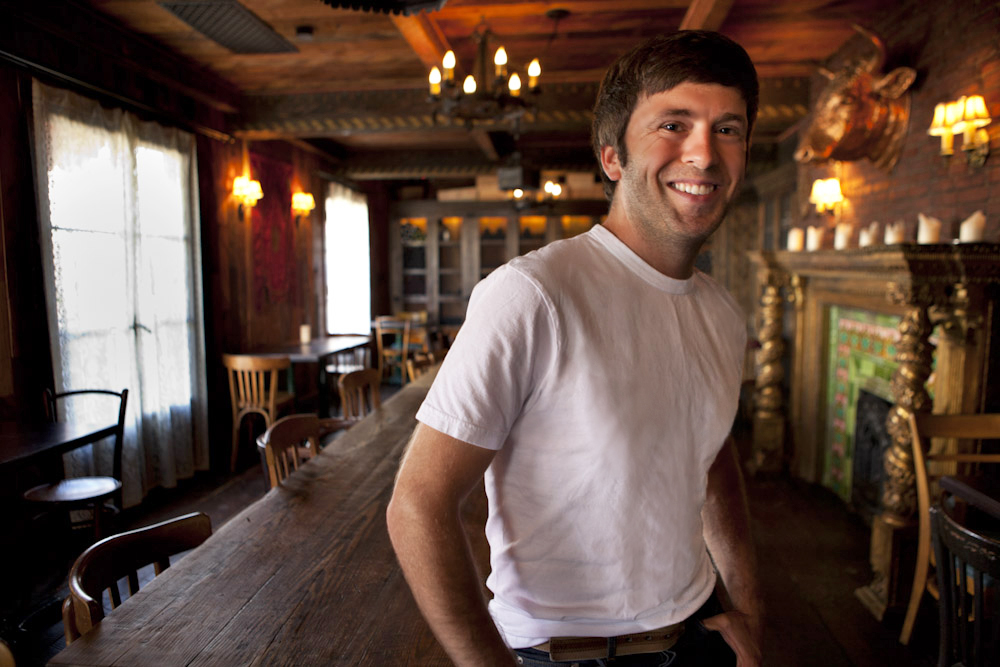 Sean MacPherson's Il Covo started out as a dark, quiet escape from the hustle and bustle of the city. The restaurant's Old World feel lent itself to a formal, classic Italian dining experience that has since morphed into something much different. Instead of dishes like veal osso buco and porcini risotto, there's wood roasted short rib along with seasonally-driven appetizers and pizzas. Below, co-chef Eric Rosenfeld sheds light on the evolution from Il Covo on day one to its current state with a modern, farmers market menu that's only inspired by Italian cuisine.

What was the physical build out like? I came out here about six months before the restaurant opened. It was really exciting. Sean is a visionary and excellent designer so he found and sourced most of the interior bits, but I found some smaller details like lanterns and Champagne buckets. Sean put together most of the major design details. We were originally going for refined Italian but over time we've seen that customers want a more casual experience.

It took several years to build, did the concept stay the same from beginning to end? We conceived this place about three years ago on the patio at Orso, the previous restaurant here. We were trying to make an excellent, some-what every day but special place where you could get classic Italian food. At first we had a menu designer and sleeves for a more formal feel. Over time we evolved into something more casual. It's not only how customers want to eat these days, but it's also how I prefer to eat. We go to the farmers market every week, our food is very fresh and local, we don't live and die by "is it Italian?" It's now an Italian restaurant that uses a lot of local, seasonal produce.

You first launched lunch, then waited several months to launch dinner. Why? After the writer's strike, the potential of lunch business that we thought we would do didn't pan out. With this patio, we thought it would do better. I find that most people these days like quick, grab-and-go lunches instead of a long, sit-down affair. The Whole Foods cafe and Cuvee nearby are always busy for lunch. Lunch proved challenging so we decided to focus strictly on dinner.

What changed six months in? Our initial chef Roberto Maggioni moved back to Europe so I started working with co-chef Michael Reardon. We looked at the menu one by one and started incorporating seasonal produce. We looked at a lot of items that weren't selling as well and decided to make more exciting food. There were a lot of dishes that were more commonly found at other nearby Italian restaurants that we did away with.

What's interesting on the menu right now? I'm a huge fan of the squid ink tonnarelli with Dungeness crab and Calabrian chili. I think Southern Italian food has a bold flavor, in particular, Calabria. The crab is a West Coast crab that's got a nice sweetness. We make almost all the pastas in house. The shishito peppers from Weiser farms where we shave bottarga on top. Again, an integration of local products with Italian ideas. The wood roasted short rib is one of our signature dishes. It's not braised, so it's a little drier, but the wood-roast gives a nice smokiness and it's served with parsley and citrus that gives it a brightness. The funghi pizza is really mushroomy instead of trufflely. We don't use any truffle oil. We have the same wood fired oven as Pizzeria Mozza, using almond wood.

How has the menu evolved over the past year? We like to make something really complex into something simple. The product selection is almost as important as the execution. Each dish has very few products. We don't integrate too many sauces or oils, so there's a greater reliance on letting the high quality show. We're always improving the menu. All the best restaurants are always improving and if you don't then you'll be left behind.

Which dishes do you feel most represent the kitchen here? The lemon pizza is one of my favorites. We very thinly shave lemon over smokey buffalo mozzarella and basil. The short rib dish is great. It's slow roasted for six hours and it's the first thing we start making every day.

Does it feel like it has been a year? It's felt like a lot longer than a year. The biggest challenge is finding a balance between making all of the customers happy (which is the number one priority) and making food that the chefs want to do.

How do you feel about substitutions and modifications? We've grappled with it. We're okay with subtractions. If someone wants Chicken Parmesan, obviously we can't do that. But we don't have a statement saying "substitutions and modifications politely declined." We could do that, but we would alienate a lot of people. Ultimately, we try to make food that's really simple and delicious, and there's something for everyone so that people don't need to make a modification. The most common request is for cheese to be taken off, which we respect because are lactose intolerant. Most requests involve people who staying away from gluten or dairy, and we can accommodate that. We have a gluten free pasta and a lot of apps and entrees are gluten-free.

Any other restaurants on the horizon? Anything else on tap for the future? There's always something brewing...
·All One Year In Coverage [~ELA~]