It appears as though those rumors about Jon Shook and Vinny Dotolo (Animal, Son of a Gun) plus Ludo Lefebvre opening a restaurant together are coming true. Yesterday, Eater released news that chef Ludo had broken ground at a small space and asked readers to identify its location. An anonymous tipster recommended the old Raffallo's Pizza spot in a small strip mall on Highland near the corner of Melrose, a stone's throw from Osteria Mozza. Sure enough, all the clues conclusively show that this is indeed Ludo's permanent restaurant.

An ABC notice for beer/wine states Trois Mec, LLP as the listed applicant and Trois Mec as the DBA (doing business as). A further investigation online reveals a trademark issued for Trois Mec from Ludo Management, Inc, which details the meaning of Trois Mec in French as "three guys/dudes/friends." Given Ludo's recent collaborations with Jon and Vinny, as well as those numerous rumors, there's little doubt that Jon, Vinny, and Ludo are the three chefs that comprises "trois mec." 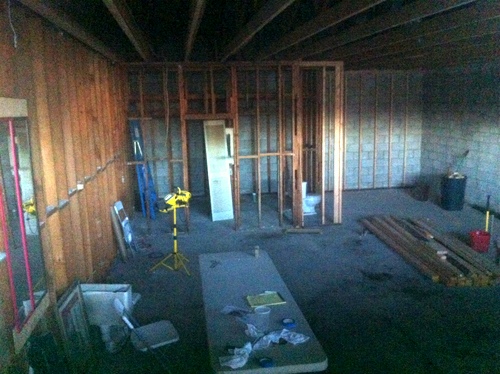 If that isn't enough, photo evidence of the interior confirms the hint from yesterday. A small, gutted-out space with wooden rafters exposed, concrete floor, and two tells — a yellow work lamp and small red bucket. The space looks very small, with perhaps enough room for about 30 diners packed in. A patio area seems inconceivable given the location. It leads one to think that maybe the concept might be similar to Momofuku Ko, with a large counter and about a dozen diners enjoying a Brooklyn Fare or Atera-type experience. Think high-end, super exclusive, and most probably incredible dining. But, that's just pure speculation. It's hard to say at this point since it's basically a cold shell.

This move marks the first tangible, permanent restaurant from Ludo in L.A., whose previous experience includes tenures at L'Orangerie and Bastide before launching his now famous pop-up, Ludobites, a food truck, and pop-ups nationwide. With the Mozzas, Susan Feniger's Street, and Hatfield's just around the corner, look for this block to become LA's new food mecca. Until then, Ludo's doing a guest dinner at New York's Blue Ribbon. Estimated opening: Early 2013.
·BOOM: The Very First Look Inside Ludo Lefebvre's Resto [~ELA~]