Union Station's Harvey House Restaurant has been mostly defunct since 1967, save for private events and movie shoots. This classic restaurant, built in 1939, is now looking for a full-time operator to take over the building, with its high ceilings and beautiful architectural details. A source tells Eater that outside areas would work as patio space and adjacent rooms could seat additional diners or serve as private dining areas. The huge bar in the center of the room is reminiscent of Mid-Century large-scale dining rooms while the side banquettes remain intact for use. At the moment, the location has been offered to a number of local restaurant operators interested in an iconic, historic space, much like Neal Fraser's upcoming residency at the Vibiana's Cathedral's Rectory. 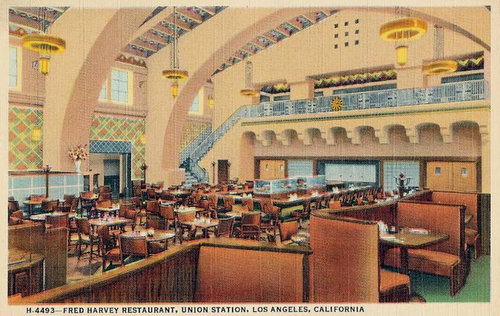 The Harvey House lunchrooms are considered the first national chain restaurant, and contributed to changing the gender gap in the restaurant industry, offering "Harvey Girls" room, board, and fair wages at a time when the only jobs for respectable women were as domestics or teachers. Interested parties may contact this gentleman for more information.
·More Up For Grabs Coverage [~ELA~]