Share All sharing options for: Patti Peck of Beachwood Cafe 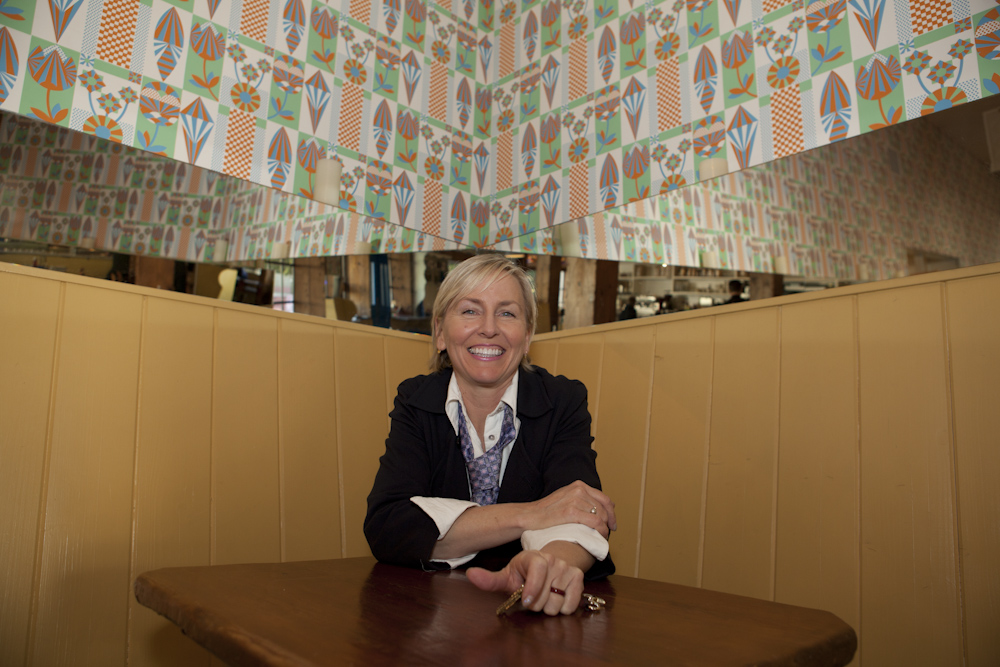 Patti Peck, the gregarious owner of Beachwood Cafe, is a tireless and enthusiastic host for this neighborhood restaurant nestled in the Hollywood Hills. She oversees the charming space conceived by Barbara Bestor (Intelligentsia Silver Lake) that retains a neighborhood feel despite an award-winning design. Though just a short drive up from Franklin Village, the historic building was transformed from an old-timey coffee shop to a bright, modern eatery with all-day service and inventive cuisine thanks to chef Minh Phan. Think seasonal, farmers market produce with an eclectic mix of Asian and Mediterranean flavors at a reasonable price point. Here now, Peck on the past year and the enthusiastic responses from locals.

What's the history of this building? This is the 90th year anniversary of Hollywoodland, which was one of the original "housing developments" in L.A. The Hollywood sign was built as an advertisement for it. This little commercial area was designed to be a European-looking village and the family who built the building still owns it.

How was the physical buildout? The same family (but different from the building owners) had owned and operated The Village Coffee Shop for decades, but everyone in the neighborhood called it "Beachwood Cafe." It was a quaint little spot and after the coffee shop closed the landlords approached me to put in a proposal for a new restaurant concept. I didn't think I was going to win it because some other big name chefs had put their bid in. But I won and we were able to turn it around in seven weeks. I really credit my general contractors who anticipated every step of the construction and incorporated our designer's plans within such a short time. To retain the feel of the old coffee shop, we named the restaurant Beachwood Cafe.

What was the initial concept? I wanted to keep as much of the original Coffee Shop elements, such as the counter, which was an old soda fountain. In terms of the food, we wanted to update the food to something fresh. I come from a background in New American cuisine and generally look to update old Midwestern standard dishes, but Chef Minh does incredibly layered and clean flavors that reflect a variety of cultures: Mediterranean, Scandinavian, and Asian. It's a big departure from the simple diner-and-coffee shop food of the previous restaurant.

Did the concept stay the same or did it change? Initially Minh was supposed to just consult on the menu since I generally oversee the kitchen at my restaurants. But she can't go anywhere now. Her approach was a little more high-end and refined but I tend to make very simple, approachable dishes. I think the food now is somewhere in between those two points. Minh takes somewhat familiar dishes and makes a "California" version of them. I get really excited because I know people are going to love the dishes. On paper they might not sound as great, but once someone takes a bite, they're sold.

What changed six months in? We originally wanted to do a quick-service model without full service, but we changed that and now do full table service. We also had more of a small-plates concept during dinner but then focused more on entree-sized portions. And lastly, we obtained a beer & wine license and now serve things like champagne cocktails to go along with our herby, unique sodas.

What's been the biggest challenge so far? I think we're locked into the neighborhood. It took some time to get to know the local crowd. Since this is such an old neighborhood, we had to understand that people had a strong emotional connection to the previous coffee shop. They're our core audience and we really tried to keep some of the nostalgia of this place. We also tried to keep prices very reasonable while updating the quality of the ingredients. Eventually we see the restaurant being a bit of a destination restaurant as well. We pickle everything in house, use seasonal produce, and make everything from scratch. I think for the most part the locals have embraced us. We've also tried resisting having a burger on the menu but we also see how it's a gateway to the rest of the menu. Initially people were a little stumped by some of the ingredients on the menu, but we were glad to explain.

What's good on the menu right now? My favorite thing is the shiso and enoki-stuffed dover sole. I also love the ume-sake braised pork because it's so unctuous. The roasted chicken is terrific, and cardamom cake might be the best dessert in the world.

What's response from critics been? Jonathan Gold came in here the second night of dinner service and wrote up a nice, short review for the LA Times. In general it's been a little bit tough because some individuals have been bullying us on Yelp, but some of what they say is ridiculous, like how the decor gives one seizures or that the menu is "boring." I couldn't disagree more. A lot of regulars have written fantastic reviews on Yelp but then they get hate mail from other users.

Has it felt like a year? We're already doing our one-year anniversary party, which we're sort of calling a grand opening. I know it's odd, but we want more people to find out about the dinner menu.

What's next for the restaurant? Eventually we want to incorporate a quick-service, to-go situation where people can get prepared foods. The menu boards behind the counter were meant to reflect a Barney Greengrass-type deli so we may look toward incorporating that. In the long term we want to look into making our sauces and doing merchandise.
·All One Year In Coverage [~ELA~]