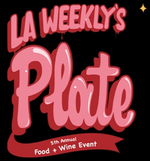 Since resident restaurant critic Jonathan Gold is no longer at LA Weekly, the paper has renamed its annual food and wine tasting event from The Gold Standard to Plate. In the past, Gold curated the list of participating eateries, and while some of the same are still game, the list isn't as strong as last year. So far there's Jitlada, La Casita Mexicana, Lukshon, to name a few. The March 3 event runs from 1 to 5 p.m. at the Petersen Automotive Museum and tickets (which go on sale January 24) cost $75 for GA or $95 for VIP. Tickets are not sold at the door and a portion of proceeds goes to the Los Angeles Regional Food Bank. [LAW, previously]