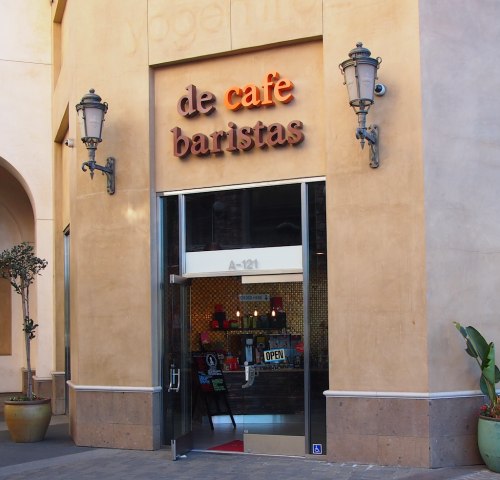 1) Monterey Park: De Cafe Baristas will grand open on January 12 in the defunct Yogen Fruz space next to the AMC theatre. All espresso-based drinks here are pulled from Intelligentsia Black Cat beans on a Synesso. Barista/manager/partner David Ko hopes to start serving even earlier at 7 a.m., but the local populace has to first demonstrate a demand. Intelligentsia and other fresh beans from selected micro roasteries are also available. 500 N Atlantic Blvd Ste 121

2 Alhambra: The minuscule Sizzling King has launched after months of remodeling delays. This cursed location has had four restaurants since Noodle Young took over Ding's in April of 2009. The menu features all kinds of meats on top of a sizzling plate, hence the restaurant's name. 525 W Valley Blvd Ste B

3) West Covina: Boiling Noodles, swimming against the tide, chose not to open at the suddenly popular McIntyre Square where 85 Degrees holds court, and decided to debut here instead. The DIY cooking trend is clearly expanding as Boiling Noodles asks diners to cook their own noodles in personalized hot pots. 1512 E Amar Rd

4) Monterey Park: Bollini's Pizza, a vestige of an old Italian immigrant enclave in Monterey Park, has grand plans of expansion to Long Beach and deep into Orange County.

5) Monrovia: As a sign that the Asian diaspora is forever spreading and always unpredictable, Yi Mei, a Taiwanese deli with pastries, opened its second branch this month. The storied Yi Mei is related to Huge Tree (originally also operated under the Yi Mei name), but is not under the same management family. The Monrovia operations is still ramping up, but expect to find the same Taiwanese breakfast items as the two decade-old original Yi Mei in Rowland Heights. 943 W. Duarte Rd