Only the Biggest Whales Get Their Own Roll at Hamasaku

Share All sharing options for: Only the Biggest Whales Get Their Own Roll at Hamasaku

Cities have categories of whale dependent upon the predominant industry. In Los Angeles, that's the business of show business. And among the many different restaurants that cater to high-rollers in LA, there's Hamasaku. One of the reasons why Hamasaku is preferred by the industry is for its nondescript, strip-mall location. Another is that the menu is varied and allows for complete customization and alteration, which goes against the credo of many new restaurants and chefs.

Over the years Hamasaku has had its share of celebrity clientele, from Charlize Theron, Julie Andrews, Enrique Iglesias, Candy Spelling, and Dustin Hoffman. A badge of honor given to these industry regulars is a custom name-sake roll, and many of them are for agents and producers that call Hamasaku their go-to sushi restaurant. Here's a rundown of five rolls given to some of LA's well-known whales. 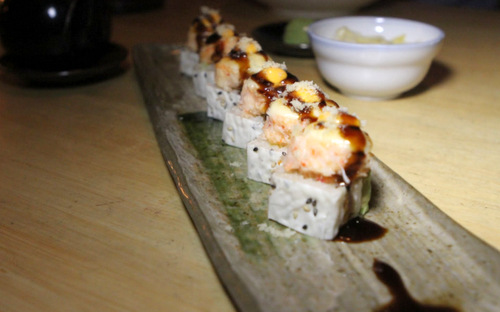 DJ Spider Roll ($24): This roll was named by Steven Nathan a producer for the TV show Bones. Instead of naming it for himself, Nathan decided to name it after his son's moniker, DJ Spider. The roll has baked lobster and crab served over an avocado crunch roll. Warmed a bit, the pieces aren't too big for single bites, and the sauce isn't overwhelming. 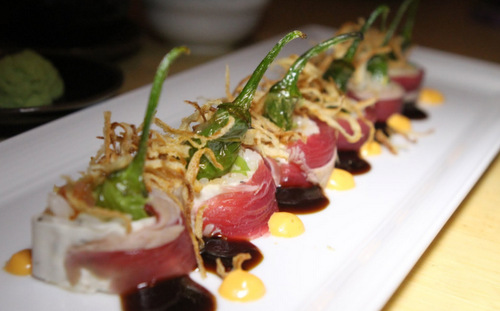 Rick Castle Roll ($24): This roll made for Nathan Fillion of the TV show Castle has spicy yellowtail, avocado, shishito pepper, avocado and rice that's then topped with seared tuna and crispy onions. Slightly warm from the shishito, this roll has everything in one bite, and then some. The end of the pepper should be pulled off after, which is slightly awkward. 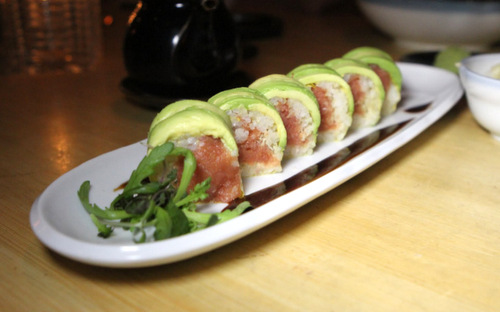 Green Dragon ($18: )This roll was named by Christina Aguilera (though she declined to directly tag her name to it). Naturally, there's a lot of avocado wrapped around spicy tuna and crunchy rice, then covered in freshwater eel sauce. The balance on this roll is quite nice despite the prevalence of avocado. 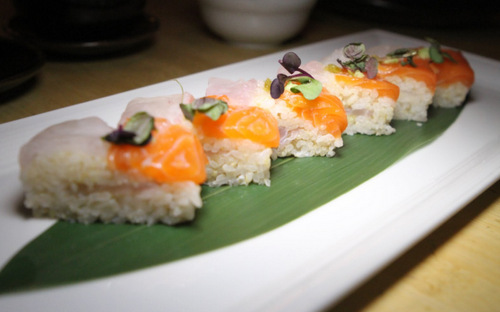 Bates Roll ($20): Formerly called the Sayuri Box Sushi, it was renamed after Tony Bates, CEO of Skype, who has been a very frequent customer in the past year. The sushi is pressed in a box and topped with salmon and snapper. It's then garnished with yuzu and micro shiso. 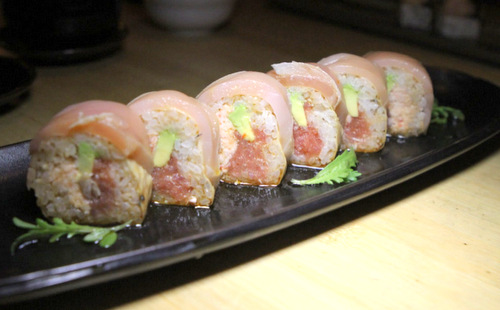 Twilight Roll $20): Named after Twilight star Robert Pattinson, this roll has spicy tuna, crab, and avocado wrapped in soy paper then topped with seared albacore and ponzu. It seems that all celebrities prefer to have their rolls wrapped in soy paper.

So what does it take to get a name-sake roll at Hamasaku? First, go there often and become a regular. Second, either make a new roll creation by tweaking one of the unnamed rolls, or ordering an unnamed roll very frequently. It's not always guaranteed these days and now that there are so many rolls it's becoming less common. There's always the last option - be a celebrity whale and make up a completely new roll.
·All Whale Week 2013 Coverage [~ELA~]