Share All sharing options for: With Plywood Removed, Sirena Looks Ready for Debut

Just a few months ago, construction workers were ready to install furniture and finishings at Beverly Boulevard's upcoming Sirena, an Italian-influenced farm-to-table restaurant which has been delayed since last fall. Now that plywood is down, a massive wood-fired oven and a clean white facade have been revealed. Small bubble windows poke into the restaurant's kitchen and a glass entry depicts a modern, heavily wooded space that looks inviting despite the stark exterior. 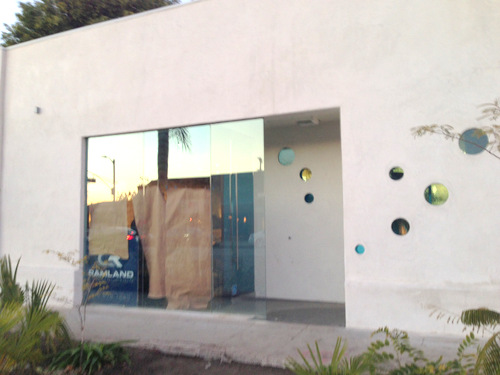 This collaboration by Sandy Gendel (Pace) and Michael Sutton (the late Guys & Dolls nightclub) looks to be a complete revamp of the old Pane e Vino outlet, while retaining the back patio that might be one of the most charming in L.A. once Sirena opens. On a recent trip to the property, the eatery's wood-fired was burning through a side door just near the entrance as staff inside prepared for an imminent launch.
·All Sirena Coverage [~ELA~]