The much-anticipated Terroni on Spring Street is still under construction, though most of the interior work appears to be finished. Downtown LA marks the Canadian chain of Italian restaurants' second Los Angeles location, the first of which opened on Beverly five years ago. Originally planned to debut this past November, the 6,000-square-foot space is grand with soft light shining in from its high windows. The 1924 building previously housed an open layout with thick columns, but a wide bar has been pieced together in the center of the dining room. A staircase toward the rear leads up to a 1,400-square-foot mezzanine. An adjacent cafe will sell wines, artisanal cheeses, produce, and other foodstuffs to go, making it a bit like a mini-Eataly, and following the Downtown restaurant-market model in Bottega Louie, Artisan House, and Coco Laurent. 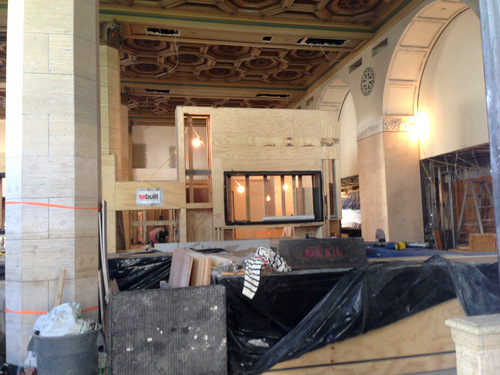 The back kitchen areas look a few weeks from completion, with only equipment hoods visible. Right now it seems like Terroni might be ready in two months, pending final building and health permits. Terroni sports a full 47 ABC license, so expect liquor, cocktails, beer, and wine. Situated on a prime Spring Street corner, The Parish is just a block away, UMAMIcatessen is around the corner, and Peking Tavern is under construction nearby.
·All Terroni Coverage [~ELA~]