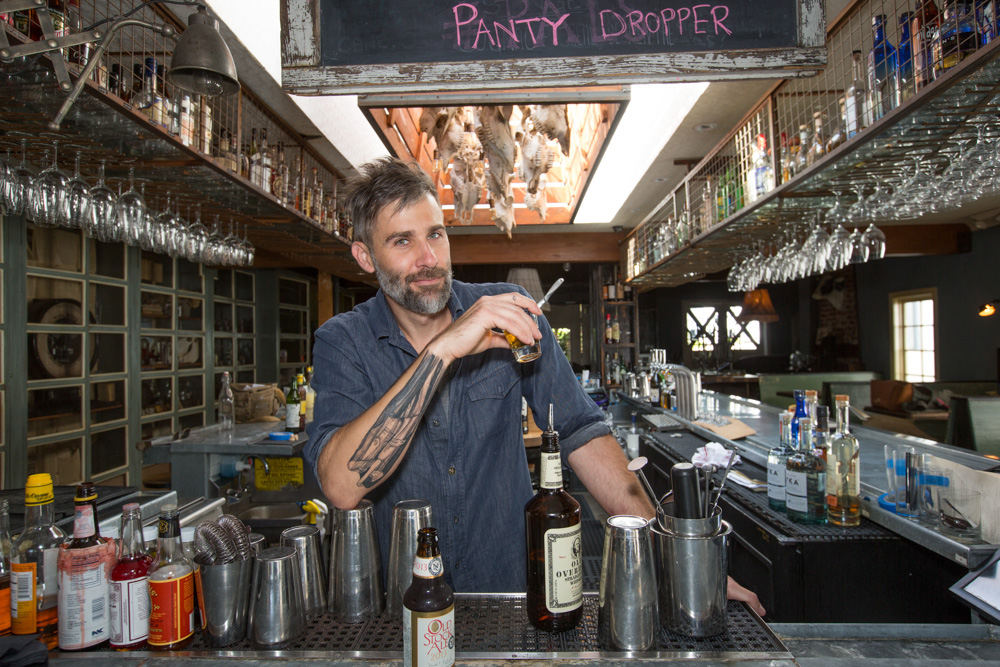 Barman Dave Kupchinsky, tall and congenial, stands at the rear bar of Eveleigh, which overlooks the city from its perch on the Sunset Strip. He assembles an American Trilogy, a classic drink with a simple twist: High West whiskey, apple brandy, and house-made apple syrup. It's a basic recipe amplified by the quality in every aspect of its creation. Kupchinsky uses this approach for the seasonal libations at this West Hollywood stalwart, introducing many a vodka-soda drinker to the joys of craft cocktails. Previously, Kupchinsky worked at The Tar Pit and Comme Ça, but he's been bartending for the better part of twenty years before helping to make a powerhouse beverage program at The Eve. Below, Eater sits down with Kupchinsky to talk about the tricks of the trade and the aspects of L.A. that making drinking in this city great.

What's distinctive about the program here at Eveleigh? We're not trying to be different. I don't know how to really describe what I do.

What do you think makes a great drink? Good booze. Good ingredients. I take a really simple, rustic approach. I'm not trying to reinvent the wheel. I'm trying to keep it as a craft cocktail bar but we have to keep it simple because it's very high volume. We try to use as few ingredients as possible using seasonal and fresh produce. I don't do any molecular stuff, nothing too crazy. No centrifuges, no immersion circulators. 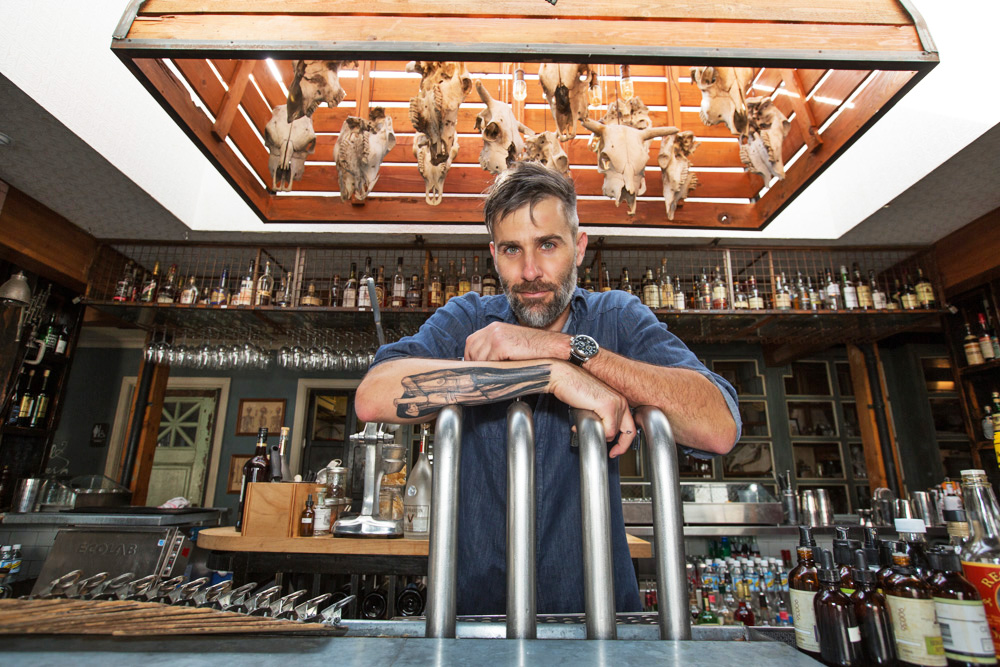 What do you like about making drinks here? This place doesn't feel like West Hollywood. If you were blindfolded you wouldn't think you were on the Sunset Strip. I like that about our restaurant, it has as rustic, farmhouse feel. The chef and I take a similar approach. We change things seasonally. He changes the menu every day. I try to change weekly with specials using produce from the farmers market. The bartenders go the farmers market on Thursdays, get whatever they see that minute and we make drinks for that day.

Do you get frustrated when people don't order those cocktails but something simple like a vodka-soda? I'm very happy to make a vodka soda. Wednesday to Saturday we're three to four deep at the bar. I usually think, thank God, here you go. We make a lot of money off vodka-sodas. If I had to rely on people who loved craft cocktails, we wouldn't be open for almost three years. At a lot of bars, if you try to order a vodka-soda, the bartender will try to talk you into getting something else, like try this gin with housemade whatever. You can't do that. I want that person to come in, enjoy the vodka-soda, then we smile, say thank you and that we appreciate the business. Then that person will come back, might see that we're doing something different, something interesting. When he or she is ready to try the craft drinks, we're ready. When someone comes up and orders a vodka-soda, they don't want anything else. They don't give a shit about mixology. I would say 80% of people don't care.

What do you like to drink when you go out to bars? A shot and a beer. I order simple things like Negronis and Manhattans. I love going to friends' bars and every once in a while get shocked because I'll have one of the best cocktails I've ever had. I appreciate it, but most people don't. Most people just want to get drunk.

What about the 20% that do order good drinks here? For me, it's about an entire bar experience. I want to sell you the wine that you want. This is a bar first, and a cocktail bar second. We're here for whoever wants to spend time here. We want people to leave feeling better than when they came in. If that takes a vodka-soda, dirty martini, glass of wine, shot and a beer, or one of the $15 craft cocktails that use homemade, infused whatever — then good. I'm interested in a total bar experience.

How did you start doing the guest bartender series? I love it because it's the night all my friends come to see what we do. I get to meet other bartenders from out of town, or some that I haven't seen for a while. It's mostly an industry crowd, people who are insiders, or interested in seeing what their friends are doing. I really love that night, for pure selfishness, because people who really appreciate what we're doing come out. 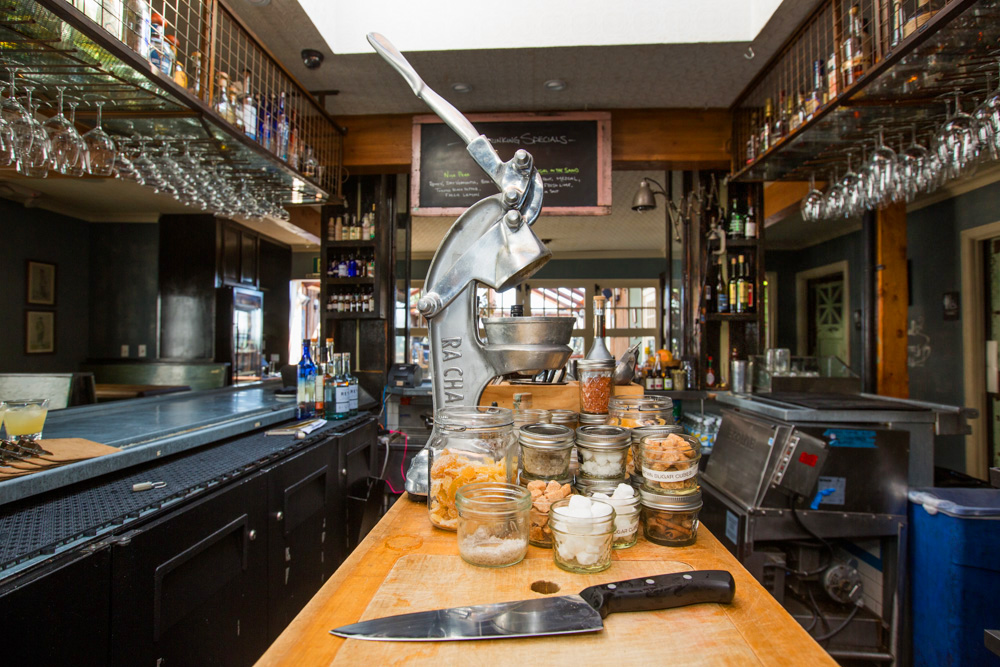 Why do you make so many ingredients in-house? It just seems like the thing to do. I don't make everything, but if the cocktail is going to come out the way I want it, I'll tailor it to suit what I want the end product to be. If I make the syrup and the drink is not working, I fix the syrup. More of the work here is the in the prep than during service.

It's been said that you call your Hotel Nacional the greatest version of it in the world. Why do say that? I've never had one better. It's a classic cocktail, but I've never had one better than mine. If someone wants to challenge me, I dare them. People try and use good rums for this but I use a well rum, Matusalem. If someone made a better version, I would thank that person. I don't mind if I get proved wrong because if someone does that, then everybody wins.

Where else do you like to drink around town? Caña, Goldie's, Cole's. I like to hang out at Thirsty Crow. The Drawing Room is my favorite bar in town, though. It's on Hillhurst and has huge shots of Fernet for five dollars.

If you owned a bar, what would it look like? I'd have a cocktail bar, but also offer cheap booze. I'll make anything anybody wants. It would be awesome if it was in a refurbished church.

What bothers you about the L.A. cocktail scene right now? There's a lot of poets, and not that much poetry. Some kid works at a bar for one year and thinks he can put together a bar program. L.A. will never get the respect it deserves until bartenders open their own bars. I place the blame on owners who hire these people who think they can run a bar, it's not the kids' fault. Most restaurant bars are a complete afterthought in this city, even though that's where the highest margins are. But that said, I have to say that I'm thankful for my owners here at Eveleigh because they've really helped me grow and learn. When I was the bar manager at the Tar Pit, I realized there's so much more to running a program like managing people, fixing stuff, defrosting freezers, unclogging toilets and sinks, fixing broken bar stools, scheduling, pricing out booze, tasting booze. 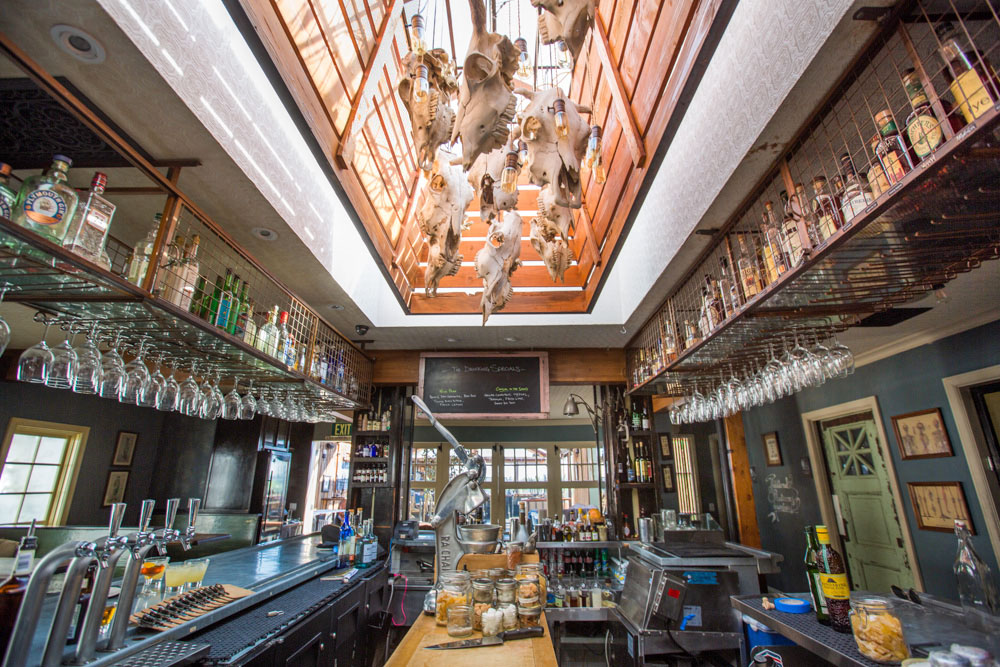 ·All The Bar Keepers Coverage [~ELA~]