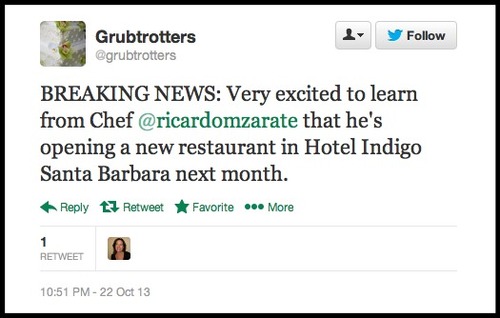 Over the past 12 hours, beginning with the above Tweet, @Grubtrotters blasted out a series of messages regarding Blue Tavern, a new Peruvian ceviche restaurant by Picca/Mo-Chica chef Ricardo Zarate and partner Stephane Bombet opening at the Hotel Indigo in Santa Barbara next month. Nothing much is up on the property's website regarding Blue Tavern, other than a note that announces a new restaurant is "Coming Soon" and will be operated by a "new, talented and creative team." Blue Tavern replaces Anchor Woodfire Kitchen. [Twitter]

Update: @Grubtrotters drops Eater a note to say, "Just had two sources confirm Blue Tavern will be CA cuisine with a Latin influence, not Peruvian ceviche. Corrected it on my Twitter feed and added more details." Soft opening November 14.