Share All sharing options for: Mike Buhen Sr. of the Legendary Tiki Ti

Welcome to a Cocktail Week 2013 edition of Lifers, a feature in which Eater interviews the men and women who have worked in the restaurant and bar industry for the better part of their lives, sharing their stories and more. 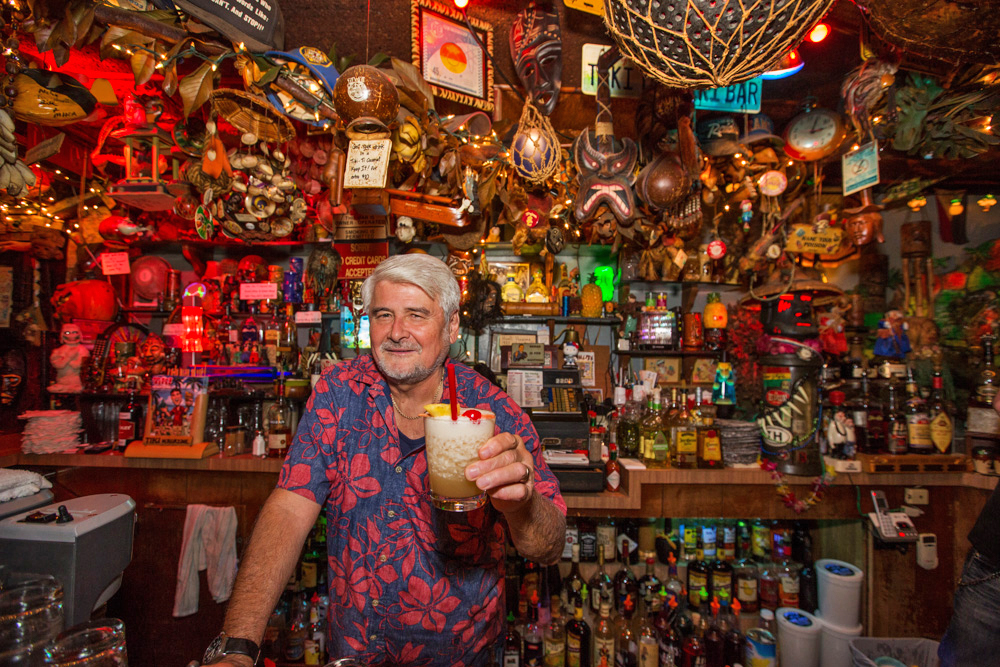 Tiki Ti opened in 1961 by a seasoned bartender named Ray Buhen, who had been making classic tiki drinks at the long-gone Don the Beachcomber in Hollywood since 1934. When the patriach decided to open this humble bar on Sunset Blvd after years of tending bar for old Hollywood royalty, he launched a new era of tiki cocktails that have survived to this day because of the efforts his son, Mike Buhen Sr., and his grandsons Mike Jr. and Mark. Now, Mike Sr. and his two sons are the sole owners and operators of the legendary Tiki Ti, where celebrities and locals alike hang out sipping strong libations that would impress historians, hipsters, and cocktail aficionados alike. Mike Buhen Sr. talks to Eater about the 45 years he's been behind the bar, the legacy of his father, and the future of one of the most beloved bars in Los Angeles. 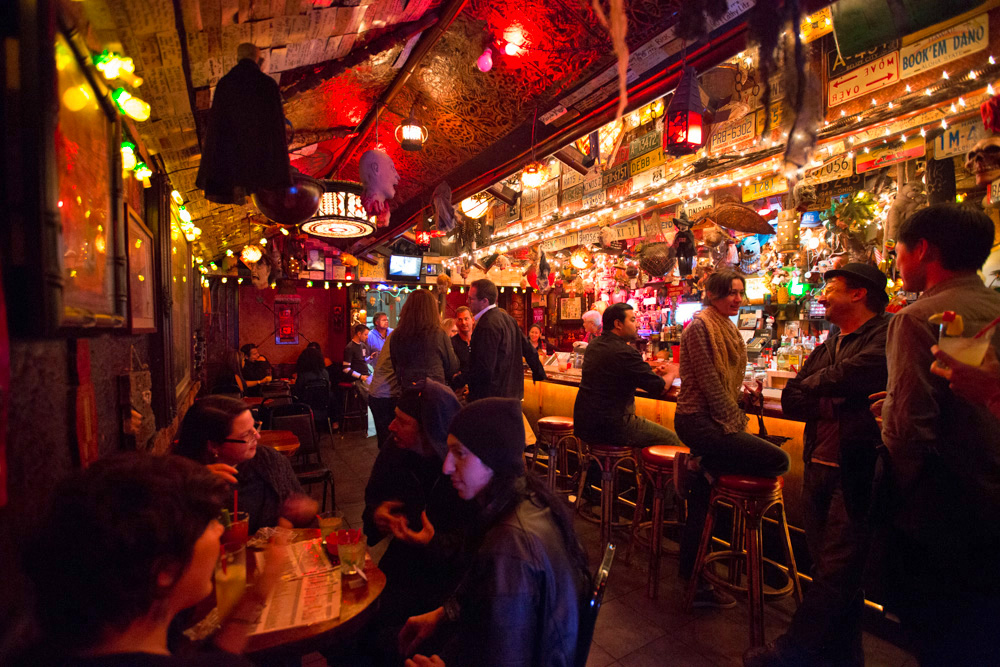 How did Tiki Ti come together? We're pressing 53 years here now. All the stuff in here my dad built. All the cork, bamboo, my dad cut all of that. We put the waterfall in. Actually my dad was going to build the bar but he didn't have enough time because once you have a liquor license you're required to open within 90 days. The State Board of Equalization doesn't want you sitting on a license and not paying sales taxes on it. He had somebody build the bar but he would've built the bar. He originally bought the 48 license for $5,000.

Your dad worked at bars before this, correct? Well my dad opened up the first tiki bar ever. He was one of the original bartenders that opened up Don the Beachcomber in Hollywood right after Prohibition in 1934. That was where they originated the Zombie, the Navy Grog, the Gold Cup. All those things came out of Don the Beachcomber.

How old were you when Tiki Ti opened? I wasn't 21 yet. I was still in high school, about 16. I grew up right around here in L.A.

When did you start working here? I started coming and helping out off and on. I already had another job and got laid off that so I thought, why don't I just come and work here? I was helping my dad and mom, both of whom had opened this place. After that I started doing this full time.

How did your dad, Ray Buhen, think about that? Did you aspire to do anything else? I went to college and got a Bachelor of Science degree in Marketing. I'm not using it because I'm not marketing. I'm slinging booze (laughs). I guess he didn't say too much but he was happy that I was here. He's been gone about 15 years now, and I have my two sons bartending. If it wasn't for them, I wouldn't have been able to do this. We have to do everything in here. We have to clean it, stock it, and work it, that's why you can smoke in here. The non-smoking law was enacted to protect the employee, not the public. We have no employees, we're owner-operated, so you can smoke inside. But, we have to do everything ourselves.

When did the law change? They were always trying to stop smoking in bars. If you were an employee, you would have to be at a job for eight hours. The public can be here eight minutes and leave. But if we had a bartender or waitress, they'd have to be here the whole time, so the law was enacted to protect them.

Did the change affect business? No, at the time I was working here with my mom, dad, and son Mike.

What are some of your favorite drinks on the menu? I got a lot of them. Ray's Mistake, which is our signature drink. The Bayanian is a coconut-pineapple-rum drink. Another good drink is the 151 Rum Swizzle, it's a cinnamon drink. It's got some power in it because it has Bacardi 151 but it's very smooth so you can drink it and it's doable. You have a couple of those and you're on your way.

How many cigars do you smoke a night when you're not tending bar and watching the door? Maybe one or two. We have a humidor here and I have two at home. There's a cigar shop in Burbank called Harry's I go to where I have a locker that my wife and son got me.

Does it get tough to be here all the time, every day you're open? You have to get R&R and rejuvenate the batteries. I tend bar on Fridays and Saturdays, and Wednesdays and Thursdays I'm cleaning tables and checking IDs.

When did your dad stop bartending? He was still bartending into his 80s and lived until he was 90. He bartended for 60 years. 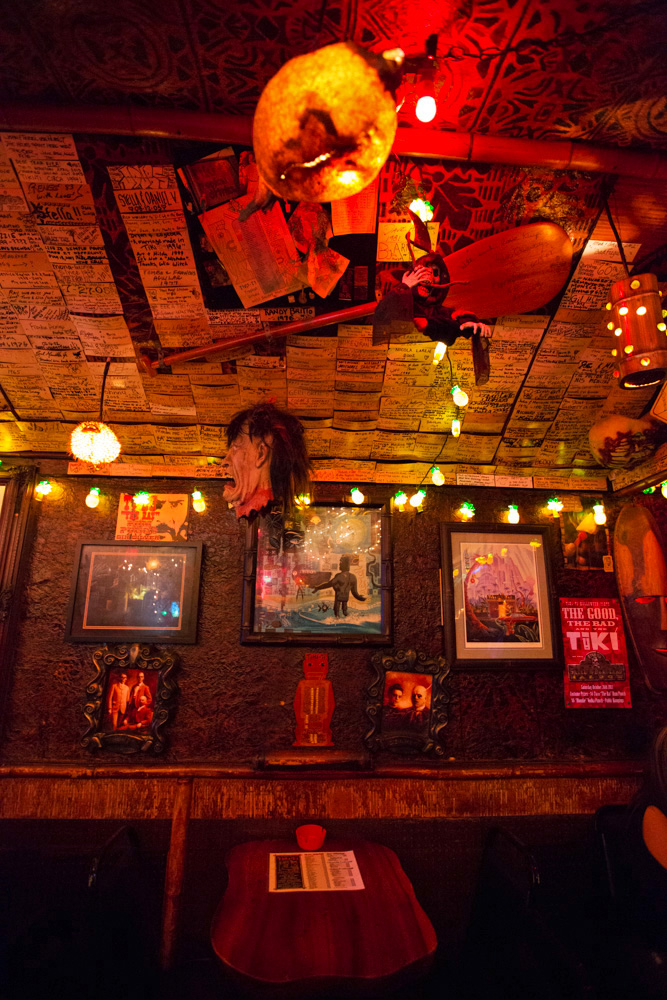 How did you devise the system of putting names on the ceiling? Well actually that started about 20-some years back. We had a plaque that said, "Patrons of rare character," and we put it up on the back. People signed the cards and said, he's got a card, can I get a card? It blossomed out of that. Regulars said they'd been coming for a long time and wanted one. We have a couple thousand in there now. They can put whatever they want on it and get artistic with it.

What's different about the clientele today versus, say, thirty years ago? It's changed for the best. After 50 some years, we've had our share of, well, we've had to 86 a lot of people. We've had some doozies in here. Some people, especially women, don't want to be bugged by people. They don't want to be bothered by some guys harassing them. If they want to do that they can go to some other bar down the street. They're not welcome here. We've gotten rid of that so that now a woman can come here and feel comfortable.

Have you had any memorable celebrity experiences? In the 60's, when I wasn't here, Marlon Brando came by a lot. He loved the place. In the 80s, Nicolas Cage came over a lot when he was living in Los Feliz. The first time he came in he had this black Rolls Royce parked in the front. Some regulars noticed he was here and started bothering him. They eventually bought him a drink called the Green Lizard, which is Bacardi 151 with Green Chartreuse.

How do you feel about owning an institution, a historic place? A lot of people say why don't you expand the place. If you did that then you'd have to adhere to the new codes. These days to open a bar, it has to be wide enough for a wheelchair to turn around.

Has anybody offered to buy it? When people offer, we just say, we're still working it.

If someone offered $10 Million, would you at least entertain the thought? Yeah, I'd entertain it (laughs). Once you get that, and then pay the taxes, what do you have left? The government's going to take close to half.

Are you happy that your sons are going to take over? Yeah, I feel pretty good about that. 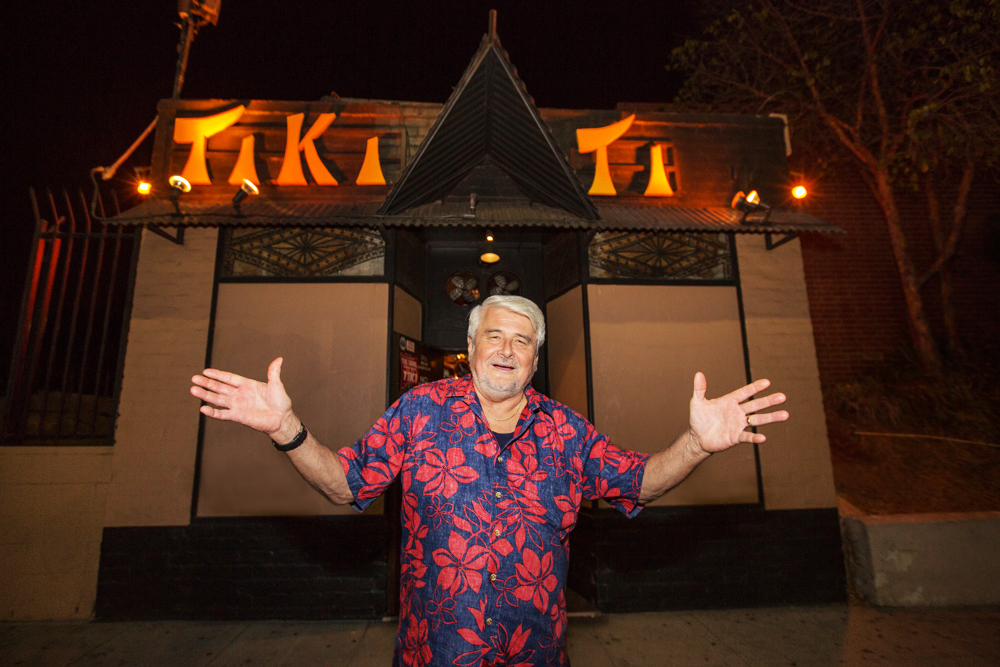