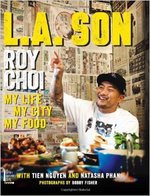 Former NY Times Restaurant Critic Sam Sifton wrote a piece this week on Roy Choi and his new cookbook, L.A. Son. It's a book about recipes and "fascinating" stories, and offers a glimpse into the world of Choi's youth and the experiences that shaped him as a chef. Don't expect to find Choi's signature moves like Mexican-Korean tacos, instead L.A. Son looks "back to what he cooked and what he ate in the years that led up to his success..." Says Choi, "People want to know where my cooking comes from. I wanted to tell them, and this seemed the best, most honest way." [NYT]