Matthew Kenney opened M.A.K.E. in the rather ambitious Santa Monica Place, the dining deck that was supposed to be L.A.'s answer to San Francisco's Ferry Building. While the corridor is still trying to find an identity with its mix of restaurants, M.A.K.E. knows exactly what it is: a raw, vegan eatery that uses advanced cooking techniques to refine a genre that's often misunderstood or largely unknown. Kenney picked Santa Monica to plant his culinary school and restaurant because he was certain the location would draw diners who were open to the idea, as well as students from around the world looking to gain knowledge of this style of cooking. Here now, Kenney talks to Eater about M.A.K.E's first year and plans for another concept that's currently in the works. 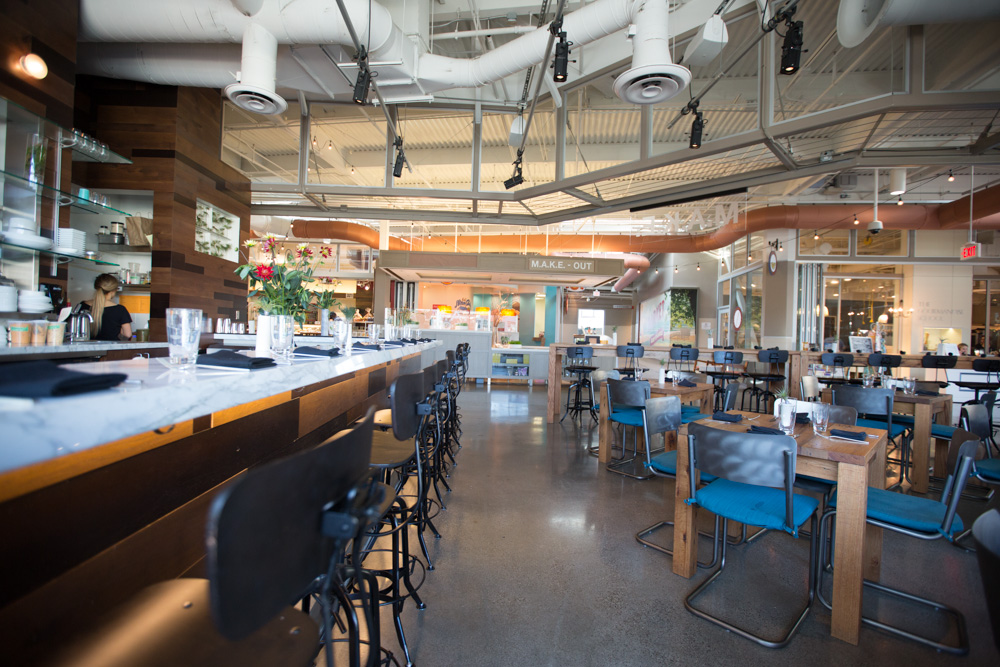 Why did you open this concept here in Santa Monica? I'd been doing plant-based food in New York for many years and I always wanted to be in California. There's the best produce year round, as well as an audience that respected and wanted the cuisine. It's been a goal of mine for a long time. When I opened a school in Oklahoma City, I realized it had the ability attract students from everywhere. In early 2012 we signed a deal to move the school here to Santa Monica Place, though we're working on a second school in Miami in February.

What's the make up of the students? Really broad. Some are as young as 18 and others are in their 70s. The demographic is mostly female, up to 75% of the class. And more than 50% are international, from places like Italy, Sweden, Australia and more. We have students that have had restaurants or currently own restaurants that want to incorporate plant-based food into their places. There are private chefs and home cooks who want to cook for their family.

What was the construction process like? We were lucky. There were already certain things in place. We had to remove the hood and gas lines because we don't use them. There was a lot of plumbling and electrical here, so it was easier to focus on the aesthetic aspects. It can be challenging to open a restaurant but we had a smooth process. I say we opened on time and met our original schedule. 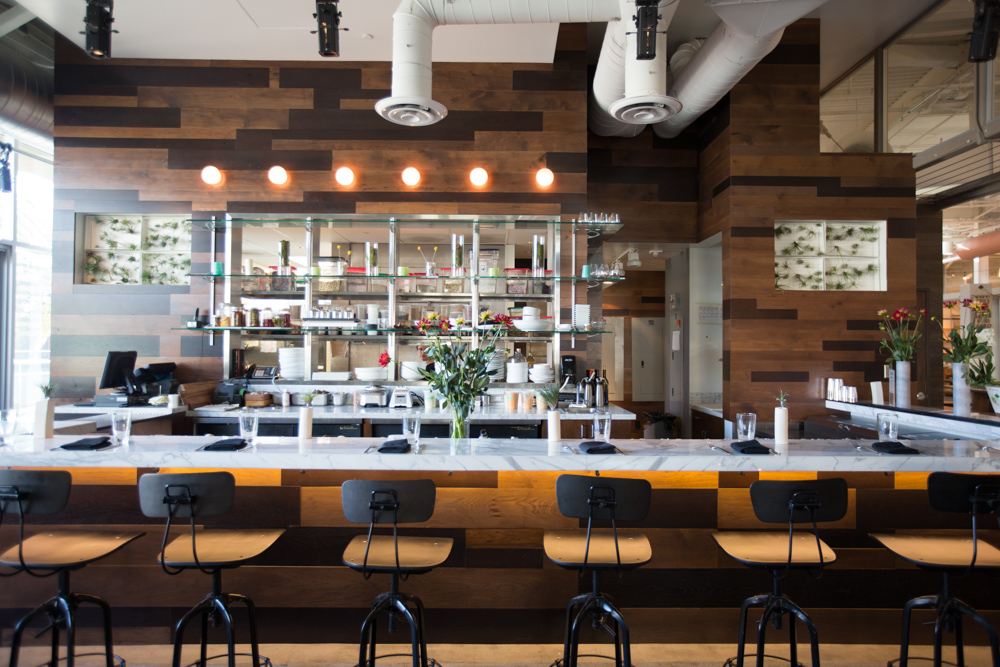 What was the initial response from clientele? You never know what to expect with raw cuisine. It's always a different type of response. I think that people in L.A. are much more sophisticated diners, and understand what raw food is. We usually have to explain, but everyone that came seemed to know. There wasn't much education involved, so we were really pleased that people were so open-minded and accustomed to it. It was a breath of fresh air because we can get some unusual responses.

What's your background and why did you go into this field of cuisine? I'm a classical-trained chef and cooked non-veg for years. I've hunted and fished while growing up in Maine. I've experience every kind of cuisine in my life. I realized that it was important to me how I felt ten minutes, or an hour after eating. When I was introduced to raw cuisine, a lightbulb went off. I thought that if this food could be elevated and refined, it could become one of the next great cuisines. I got so excited about it. It's not that people shouldn't have a toasted almond or cooked zucchini. As a chef, as someone who appreciates artistry and a complete experience, there's nothing as exciting as this type of cooking. I'm about aesthetics and clean flavors. Also, the products here are so fresh all the time. Raw food is really the most exciting and cutting edge thing we do, using modernist techniques. It's a lot of fun.

What did you change six months in? We had to adjust the portions a little bit. Our food is refine and cutting edge, but we didn't realize that the culture just wants really healthy food. They wanted a big, beautiful salad, not 3 or 4 courses for lunch. When we opened, we were a little more tasting menu and multi-course focused, but during the day we had to make it a little more approachable. That's the only really big change.

How do you feel about the bounty of the farmers markets nearby? All the markets are incredible, with beautiful, high-quality, and seasonal products. It's exciting for students and chefs. The chef who twice a week. We also found sources for certain things, like raw almonds from Santa Barbara. Everyone has organic, natural products so it's great to be a restaurant here.

What are you favorite things to eat on the menu? I love the black pepper kelp noodle. Our chef has his version of a Caesar salad. The kimchi dumplings are a classic of ours. The mushroom pate has a beautiful texture. And the banana split. It doesn't look anything like a banana split though. 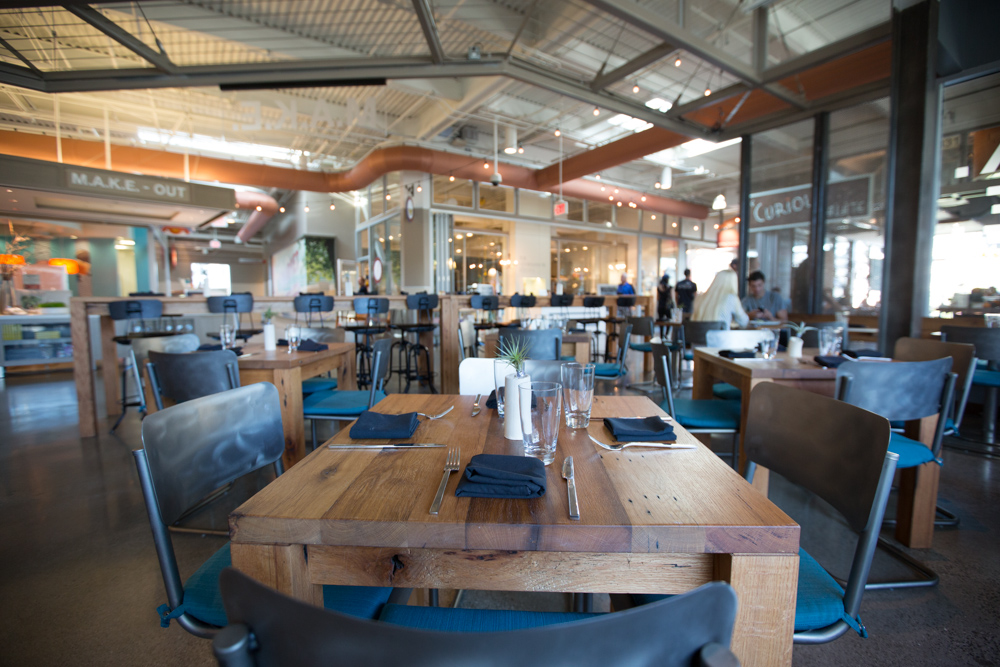 Has it felt like a year? Yeah it has. It's been a very pleasant year. We're not a huge place, we're all quite manageable. A lot of our team is made up of people who have worked with us for quite a while, like all the instructors. When we're working with people who know each other, it's less stressful because the teamwork is already there. On the other hand, it's felt even longer than a year because we see all the new faces of the students. We had a couple hundred people pass through in that sense, so it seems like a longer time.

Are you working on a new concept? We're not in a rush. We are working on a more casual concept, but we haven't signed a lease. It will be more of a fast-casual restaurant somewhere in Venice or Culver City. We opened two restaurants this year and we have a big project in Miami, so we have our plates pretty full.

Do you think plant-based cooking is the wave of the future, and what do you think about the number of other plant-based restaurants that have opened in L.A.? More consciously-cooked foods really are the future. Someone said long ago that food should be medicine. I really believe that chefs have an obligation to make food that's great and delicious, but also promotes health. We're going to see a change, not just here in L.A., but throughout the country. The more, the better. Raw food, vegetarian — I don't look at it as competition. I just see it as more support for what we're trying to do globally. M.A.K.E. isn't designed for mass appeal, we're more experimental with food styling and plating. It's as much about education for our students and ourselves so it's a more narrow business model. I love what Tal Ronnen is doing at Crossroads. I like what they're all doing.
·All Matthew Kenney Coverage [~ELA~]
·All One Year In Coverage [~ELA~]