Jimmy John's in the Works for Santa Barbara, Beverly Hills

Share All sharing options for: Jimmy John's in the Works for Santa Barbara, Beverly Hills 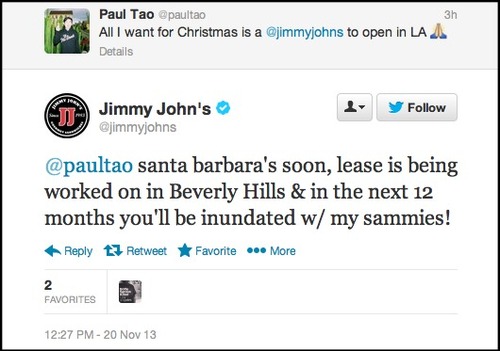 All Paul Tao wanted for Christmas was a Jimmy John's in LA. And the sandwich gods are answering with two SoCal locations underway, one coming to Santa Barbara, followed by Beverly Hills.

Launched in Illinois 30 years ago by Jimmy John Liautaud, the "gourmet" sandwich franchise, sort of like an elevated Subway with fresher ingredients and far better bread, now operates over 1,600 outlets in over 40 states. Right now JJ can be found in San Francisco, Fresno and Visalia (outside Bakersfield), and soon LA. [Twitter]