Share All sharing options for: Alex Day of Downtown's Honeycut 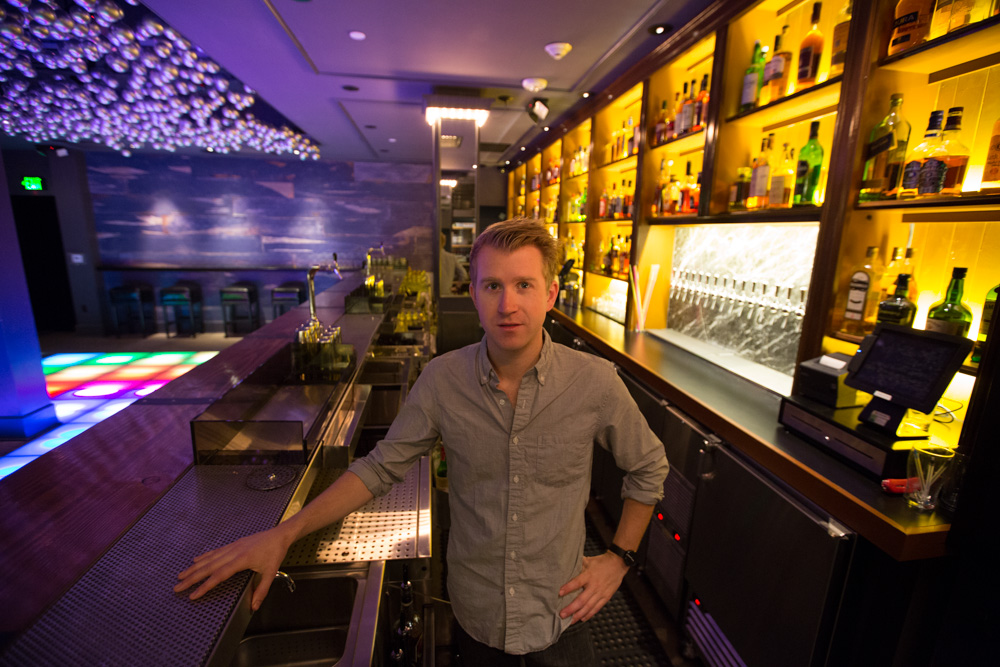 Honeycut opened last month in a Downtown basement with a peculiar formula: dancing and great cocktails. Rarely do the two live in harmony. Founded by Cedd Moses, Eric Needleman and the Proprietors LLC duo of David Kaplan and Alex Day — all of whom have deep experience with nightlife — it's no surprise that the place has been jam-packed on weekends since inception. The distinction between dance floor and cocktail lounge is clear here, but the quality of the drinks doesn't subside according to the room. Day, who launched his career in cocktails at New York's famed Death & Co., talks to Eater about Honeycut's bar program, how L.A.'s cocktail scene fares against other cities, and more.

How did you get into bartending? I started working at Death & Co. shortly after it opened. It really changed my perspective on the hospitality industry. Before that I was working at a dive in the Lower East Side, contemplating grad school. It sounds terrible and ridiculous, but I was just trying to figure out my life at the time. I became an owner of Death & Co. a few years ago. I'm glad I dove right in, I'm pretty happy about that choice.

When and why did you come to L.A.? I came here a little over three and a half years ago. Dave Kaplan, my partner, and I do everything together. About four years ago we talked about doing this project, Proprietors, LLC, and we made the move. I still keep an apartment in New York, but L.A. is more my home now.

What was the cocktail scene like in L.A. when you came? The scene has evolved really aggressively over the past couple of years, and even before that. When I landed, there were a couple of really good spots, a bunch of enthusiastic people, and a really strong community. Now, you can go into any area of town and find an amazing drinking establishment. No one's really mimicking what L.A. is doing, so it's hard to define what it is that makes L.A. great.

What's changed over the years? The game has changed everywhere, not just Chicago, New York, San Francisco, or L.A. Now you can go to any small town and find exceptional drinks being made. But, simply having good drinks isn't enough these days. It's professionally very exciting to have the next conversation: How do we create a better experience? How do we have a better time, not just have good drinks? It's all part of a larger understanding of the cocktail world. And the superiority of New York is no longer fact, which is cool. I do wish the rest of the country got more attention. 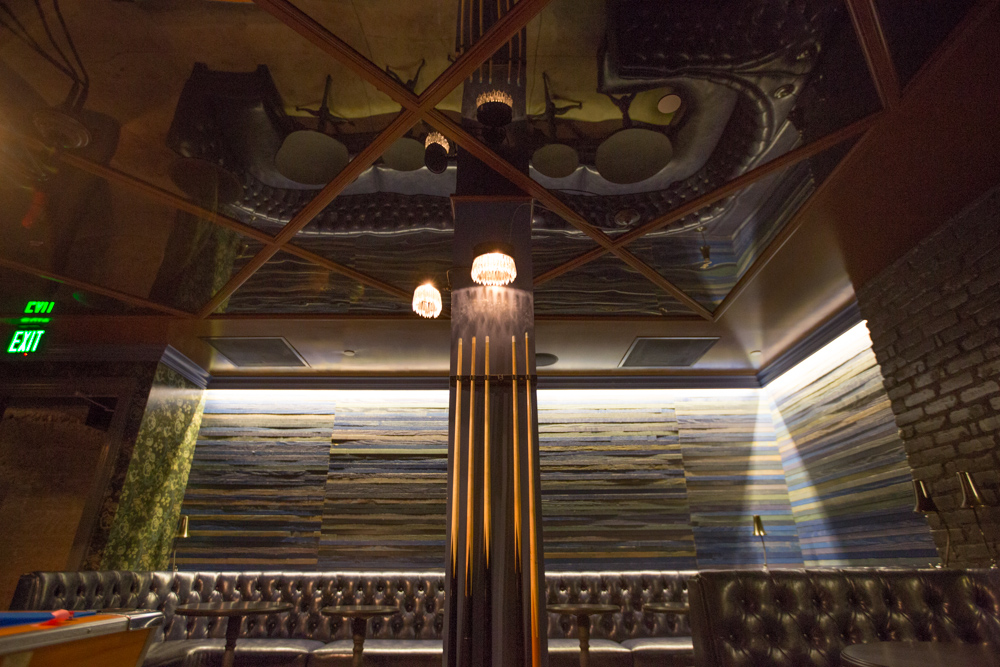 What's unique about Honeycut's cocktail program? As one of the owners, I'm very involved, very focused, but my main energy is in the beverage program. My company, Proprietors, does a lot of menu development and design work. Our principal beverage person is Devon Tarby, formerly of The Varnish. She and I worked together on the core of what the Honeycut bar program is, but we're lucky enough to have a really great group of bartenders who have all contributed. It's very much a group effort. It's one of the best bars I've worked with, it doesn't feel like one person, but rather a group expressing their creativity. I'm happy it's a collaboration. If my name never got mentioned, that's fine with me, in fact it would make me feel more comfortable.

Why have this kind of expansive program at Honeycut? There are 50 drinks on the menu. Our overarching philosophy is simply this: well made drinks in two ways. One is a room that we call the Cocktail Bar, you can guess what happens there. The other is the Disco, which is more high volume. In there, it's a big party on Thursday, Friday, and Saturday. The Cocktail Bar is a little more sedate, with the pool table and all, but it's still busy. The drinks are reflective of the energy we want to create. We wanted all the bartenders to come with ideas, do a variation of a classic and also a ridiculous idea. And we were surprised by how many things stuck, and it felt like a crime to not put them on the menu.

What about the Disco? We focus on front-loading a lot of the labor so that drinks come out quickly. That's why we have a draft cocktail system. We sous-vide a lot of syrups and infusions. We use the centrifuge to clarify juices. We have this adult soda using vodka, clarified orange juice, and sherry, that's then force carbonated and dispensed on draft.

What are a few drinks that you're really liking right now? One of my favorites is a low-ABV cocktail called Pins & Needles, which is Lillet Rose, Rhum Agricole, pineapple gum syrup, lime, bitters, and soda. It comes in a wine glass, and it's like a grown up spritz. Harry May-Kline, another bartender here, made the Chinatown Daquiri, made with Cana Brava rum, Clearcreek 2-year apple brandy, lime, ginger, and a single clove shaken with it. It's a beautiful fall-winter style daquiri.

Do people still order vodka sodas? Our job is to make people happy. If that's what they want, we're happy to give it to them. And it will be the best version ever. We have a great system that dispenses selzter water so that it's continually chilled, crisp and perfectly effervescent. Our tonic is homemade as well. And there's nothing with having a Jameson on the rocks.

What's the initial response been? Really positive for the most part. Honeycut is unique because it toes the line between a lot of things. It's not quite a quiet little cocktail bar. Earlier in the week it feels like one, we have a pianist play, it feels like a club house. The weekends are slammed. So it's about managing expectations. We're a group of people that like to try something new, and while that happens we're figuring out how to do it along the way. We hope the experience is seamless and smooth. At the end of the day, we have two different bars in a basement. We're breaking the mold so that having great drinks doesn't mean one type of experience. I don't want to be a club or have bottle service, but if people are partying and having a great time, call us what you will. There's a time and a place to have a boisterous evening. And another time and place to have a comfortable booth and listen to a piano. 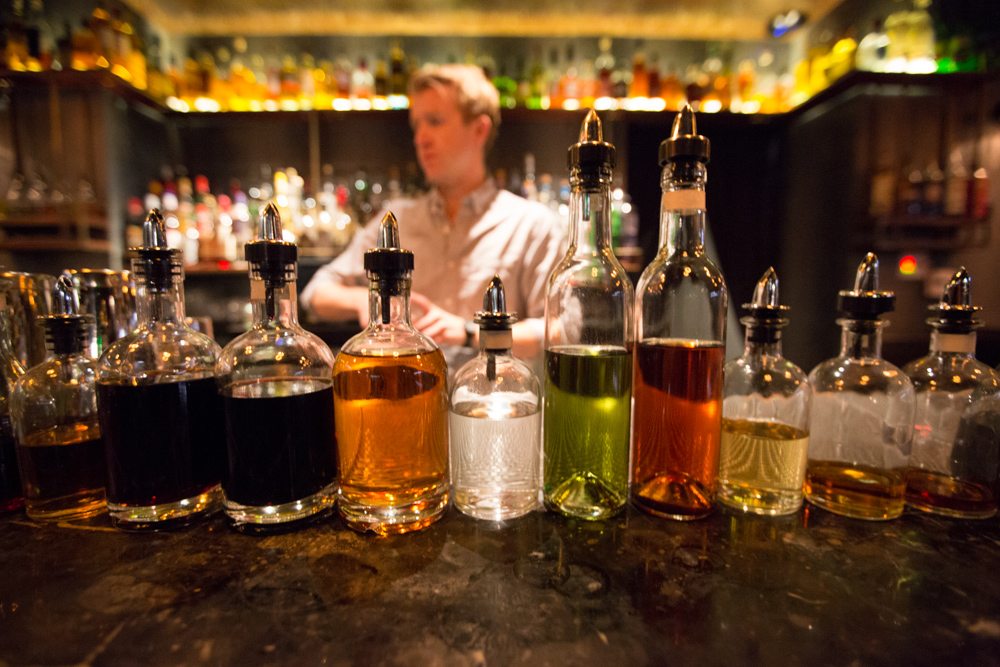