Share All sharing options for: Noodles King in Rosemead 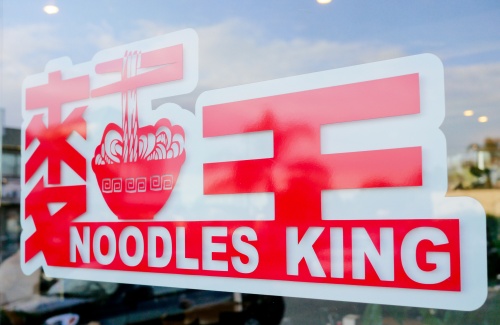 John Huang was well on his way toward the American dream with his brother Tony until their second venture, Hunan's Restaurant in Alhambra, burnt down on July 16, 2007. According to the LA Times, many of the building's businesses were underinsured, but Hunan's Restaurant happened to have a responsible insurance agent, and within days, John and his brother Tony, who ran the back of the house, were looking into a new venture. 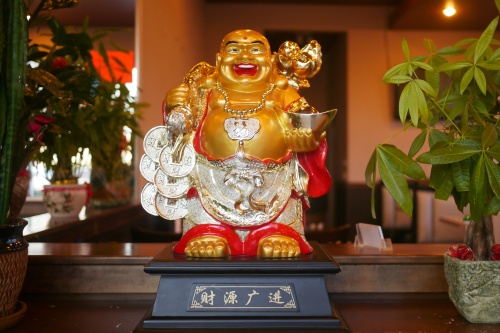 Five years after losing their popular restaurant and suffering an indignant partner, Huang finally reopened his own joint, separate from his brother, in the form of Hunan Mao (in honor of Mao Tse Dong's birth province). It has been well received, and there is no more contractual drama. A year after Hunao Mao, Huang opened another establishment to serve a style of Hunan quick service food he believed previously unavailable in California. 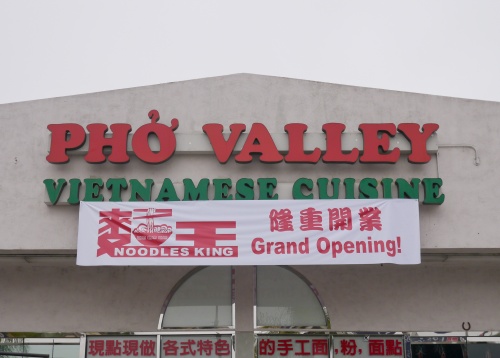 Noodles King is an homage to a century-old brand called Yang Yuxing, a noodle house with nearly 50 varieties of noodle, in the city of Changsha, Hunan province's capital. While the 75-store strong Yang Yuxing originally started as a rice noodle soup shop, it has since developed a reputation for its variety of egg noodles. Noodles King attempts to emulate Yang Yuxing by producing all its noodles in house. The flat style of rice vermicelli is a bit different from Guilin's round noodles, and the egg noodles here uses alkaline to achieve a particular bounce and texture. 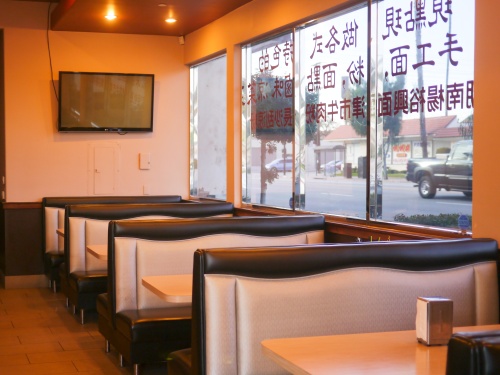 Huang is aware, despite the increase in number of Hunanese restaurants along Valley Blvd., that there are far and few fellow landsmen stateside, hence a flour expert from Henan province was brought in to craft additional dumpling and wonton items for a wider audience. The core menu, Huang's expertise, is on the back side, and it is sparse.

From the front menu, order the Changsha-style shiu mai ($3.99). This is shiu mai that is completely different from the Cantonese style, filled with peppery sticky rice made pungent by five spice powder. Don't expect a delicate wrapper. It's just not how it's done. If you enjoy carb-on-carb love, or something to the tune of lomo saltado, try this out. 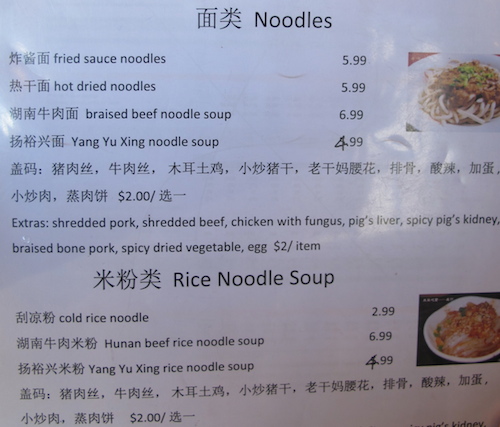 There are two main styles of noodles here, one is the rather spicy braised beef noodle soup ($6.99) available with three types of noodles (fat rice, skinny egg-wheat, ultrawide egg-wheat). Chose the ultra-wide and you'll receive strands of pasta three times as girthy as tagliatelle. The broth is unlike the Taiwanese beef noodle soups. Some may find it off-putting, but just like China's Yang Yuxing, the portioning is generous, and "girls may not finish."

To experience Huang's patriotic intentions, go for the lo-mein (mixed, with little broth) style noodles listed under "Yang Yu Xing" on the menu. The plain noodles are a bit of a bore, so toppings are necessary. A warming, and possibly painful combination would be to add the tender braised beef (off the menu, but available) and the spicy dried vegetable to the rice noodles for an $8.99 complete meal-in-a-bowl. Alternatively, go for the spicy shredded pork and spicy pork kidney add-ons with the wheat noodles, then judiciously ladle in neon pickled peppers. Don't be afraid to yelp from the spiciness; it'll only make Huang proud. Though if one is truly unable to handle the capsaicin stress, the noodles are all available in mild.

To this day, John Huang still speaks sadly of the '07 fire, but mostly because he laments losing the brand new rosewood furniture imported directly from China right before the tragedy.
· All Dining on a Dime in The SGV Coverage [~ELA~]