Share All sharing options for: Giovanni Martinez of Hollywood's Sadie 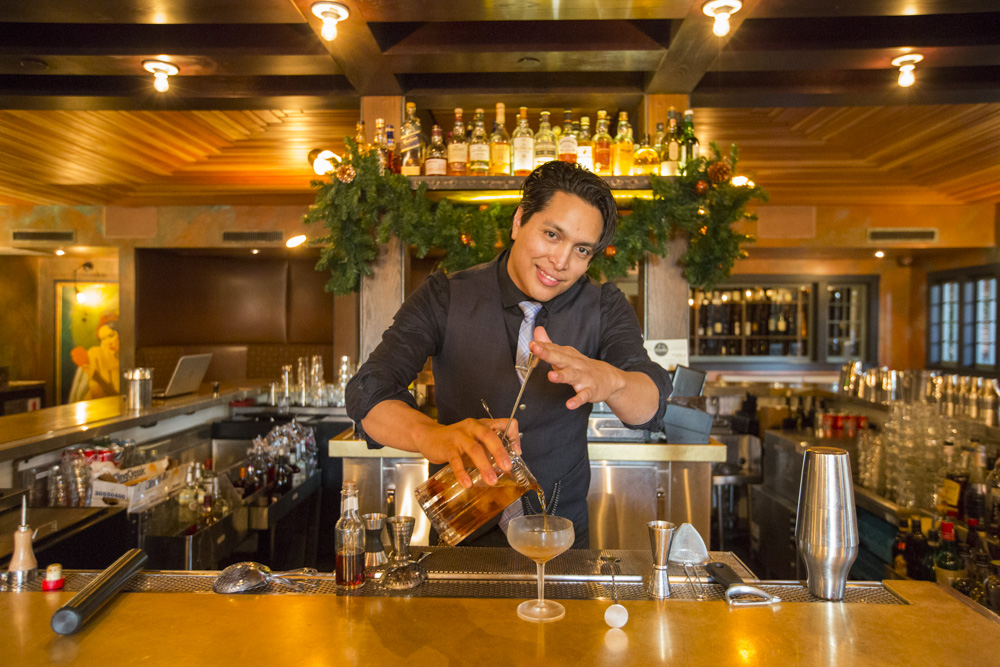 Giovanni Martinez got his big break at the Buffalo Club in Santa Monica, where he convinced well-heeled patrons to give up their vodka-sodas and sip something slightly more interesting. Since then, he's helped represent Chivas Regal's brand across the world and trained staff for Fig & Olive's cocktail program. But his heart and soul remains at two-year-old Sadie, the Hollywood restaurant that's become known for reliable cooking and stellar drinks — something that's sadly not easily found in this part of town. Here now, Martinez talks to Eater about changes in the L.A. bar scene, overall trends in cocktailing, and why tending bar is so fulfilling.

How did you get your start bartending? I started about ten years ago at the old Conga Room where Busby's used to be. I still remember how nervous I was. I didn't barback, a buddy of mine got me the job. I remember driving there and tried to go through every possible recipe. But it was just four drinks back then: vodka soda, rum and Coke, mojitos and margaritas. I was the new guy, so I was the mojito bitch for a few months. My first introduction to "mixology" was my third shift in, my first bar mentor there threw in a splash of pineapple with the margarita. I was like, you can change recipes? That's when I started to play with different flavors. It propelled me to become the nerd that I am, looking for old books, researching online. It was all for naught because at the time there was no place in L.A. where you could showcase the art form yet.

And when did you become the bartender you are now? At the Buffalo Club in Santa Monica. I didn't really know how to spot a celebrity back then, but a lot of the money guys, the behind-the-scenes guys would come in. This one time, a server there asked Larry David how his soup was. And David said: "It's soup, I mean it's as good as soup can be, it's just soup!" I tried really hard not to laugh. I really feel proud that that place turned a corner because all they were selling was wine and vodka-sodas. I felt like I had to rip the Kettle One out of their cold dead hands. Eventually 40% of the drinks ordered were off the cocktail menu. By the time I left, I feel like most people showing up to have cocktails.

What influenced you the most? Years ago I got the chance to travel around the world with a budget, and go anywhere and do anything I wanted. I just had to blog about my experiences on the Chivas Regal website. I got to see global markets like London and Shanghai, and talk to the guys working at these bars in the cities that had already developed a cocktail culture. I talked to guys who showed me best practices, their tricks. But L.A. has turned a corner really quickly. Just five years ago, there was just Seven Grand. Now there's 20 to 30 places. We learned from our predecessors and built up a strong community. 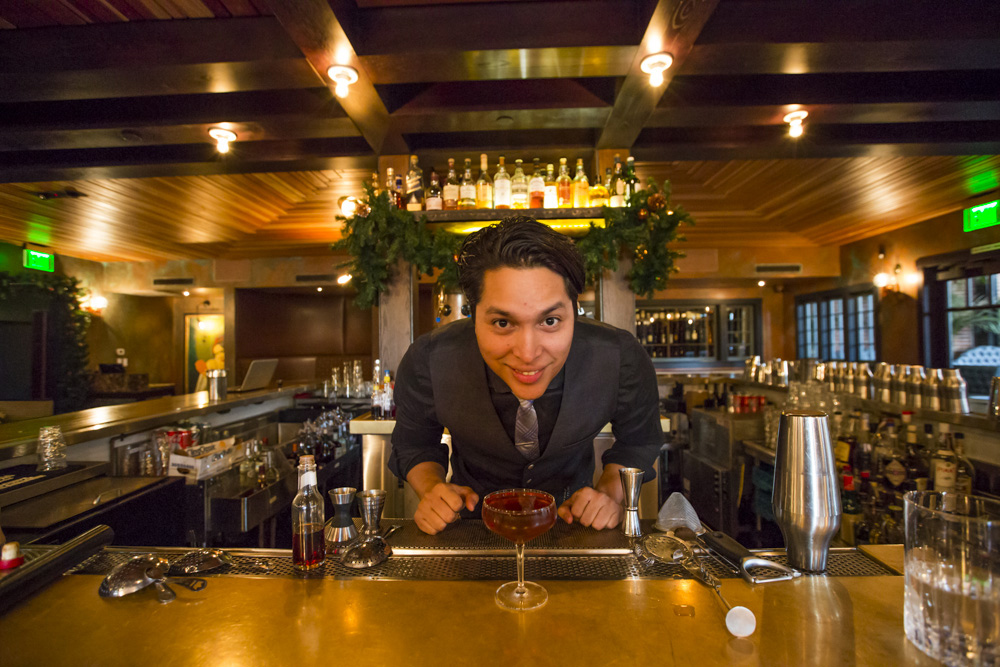 What's your vision for drinks here at Sadie? It's the same for the whole place. It's owned by the Simon Family, who's owned the property since 1951. The previous business (Les Deux) hurt their reputation in the community, so instead of leasing it out, they wanted to have a neighborhood place with good food and drinks with decent prices. The drinks here aren't crazy involved. They're well balanced, and somewhat innovative. No clouds of plastic bags. It's more about giving good drinks at a decent price. It's about being interesting, not intimidating. Even though I'm doing a bit more with Chivas right now, I wanted to stay and be a part of Sadie. I didn't want to lose this little paradise.

What cocktails are you liking on the menu right now? The Massive Central. Everyone's on a sherry kick right now. The Autumn Sunrise by Jerry Nessis, one of our bartenders who used to work at the Flatiron Lounge in NYC. It has wonderful, fall-y flavors.

Do you think sherry is the next amaro? I like that things go in cycles. We're not discovering these ingredients. I can't stop listening to hip hop. Last month, it was classic rock. Right now, we all decided that sherry's awesome. I think we're going to start seeing a little more variety, instead of that fetishized bar item. It's weird because Japanese whiskey is what's propelling scotch to being made into cocktails again. Yamazaki did a great job, and you can't get enough. When it shows up, I'm lucky to get a case. I'm the number one Yamazaki account in Southern California and I have to beg. But I hope it doesn't have the case that we don't fetishize because they're rare. There are plenty of good blended scotches.

Do you prefer them to single malt Scotches? Single malts are better home in more delicate drink, like an old fashioned. Blended scotches have a wider breadth of flavors, so with that broader spectrum you can pull apples, smokiness, etc.

Where do you like to drink around town? Boardner's, which has been around for a long time. It used to be one of Mickey Cohen's places. Also, The Daily Pint and No Vacancy. 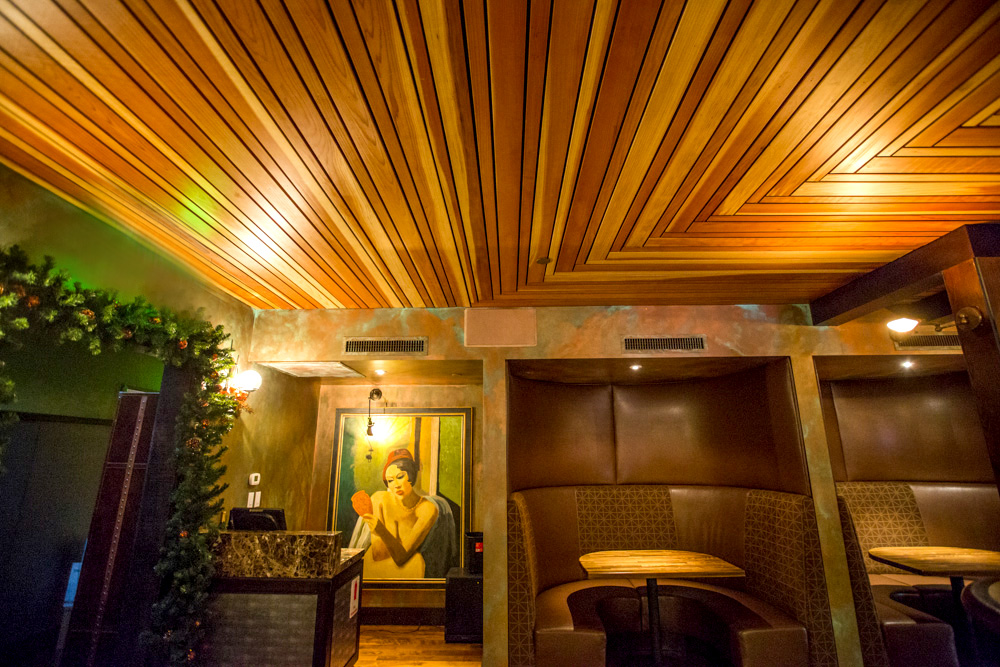 What's your drink of choice to make at home? Whenever I start, my girlfriend just thinks, shit, you're going to make a mess. I really like making morning glory fizzes, which are scotch fizzes with some absinthe. Sours and fizzes are easy. You have eggs in the kitchen. And like many people in L.A., I have a lemon tree in my backyard and get lemons from there. Sugar, scotch, lemon, and egg.

What do you think is the best part about bartending? I didn't have a plan after college. I studied anthropology and international relations. I learned the latter that is we're all going to have a hellish, fiery end, so you might as well laugh it off and drink liquor. I feel like this is fulfilling. If you want to be cynical, you could say we're enablers of bad habits. But I feel like when you provide a high-quality experience, it goes beyond that. Most people don't drink themselves dead on morning glory fizzes. People are coming to have a good time, forget their woes, make new friends, strengthen bonds. It's a human experience. I know it sounds grandiose, but I feel like it's such a vital role in human life. You could be president for eight years and not make a difference. If you come here, you'll have a nice place to hang out, with good music and food.
·All The Barkeepers Coverage [~ELA~]