Share All sharing options for: Friends of Eater Offer Headline Predictions for 2014

As is the tradition at Eater, our closeout of the year is a survey of friends, industry types, bloggers, and readers. We've already covered Top Standbys, Top Newcomers and 2013 in One Word, Best Dining Neighborhood, Biggest Dining Surprise, and Single Best Meal of 2013, and Restaurant Breakups. Now it's time for Headline Predictions for 2014. Readers, please add your thoughts to the comments. 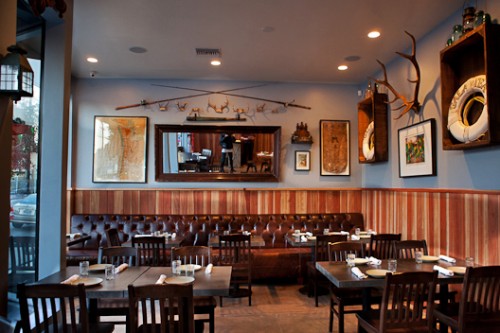 Inside Son of a Gun, West Third/Photo by Elizabeth Daniels

Q: What are your headline predictions for 2014?

Daniela Galarza, Deputy Digest Editor at LAmag: An increasing number of restaurants opt to take payment and reservations in advance, instituting a ticketing system similar to that of a concert or theater production.

Brigham Yen, blogger behind DTLA RISING with Brigham Yen: The next hottest dining neighborhood will be Chinatown.

Bill Esparza, blogger behind Street Gourmet LA: Latin and Asian cuisines will continue to rise and overtake the platform that has been held by European cuisines in the past here in the U.S. and internationally--they are the new standards. The Michelin Guide will go the way of the Thomas Guide. Regional Brazilian cuisine will take its rightful place as the 2nd most important Latin-American cuisine after Mexican. Chef Alex Atala will take the no. 1 spot on the Pellegrino 50 Best.

Zach Brooks, founder of Midtown Lunch: Jon & Vinny do Something New, Everybody in L.A. Follows Suit

Jeff Miller, Editor at Thrillist LA: "Bill Chait: What Doesn't He Have A Hand In?"

Maggie Nemser, founder of Blackboard Eats: Restaurateurs look to Lincoln Blvd. Citarella opens in LA (why on earth are there no large super gourmet markets in LA?)

Son of a Gun

Son of a Gun