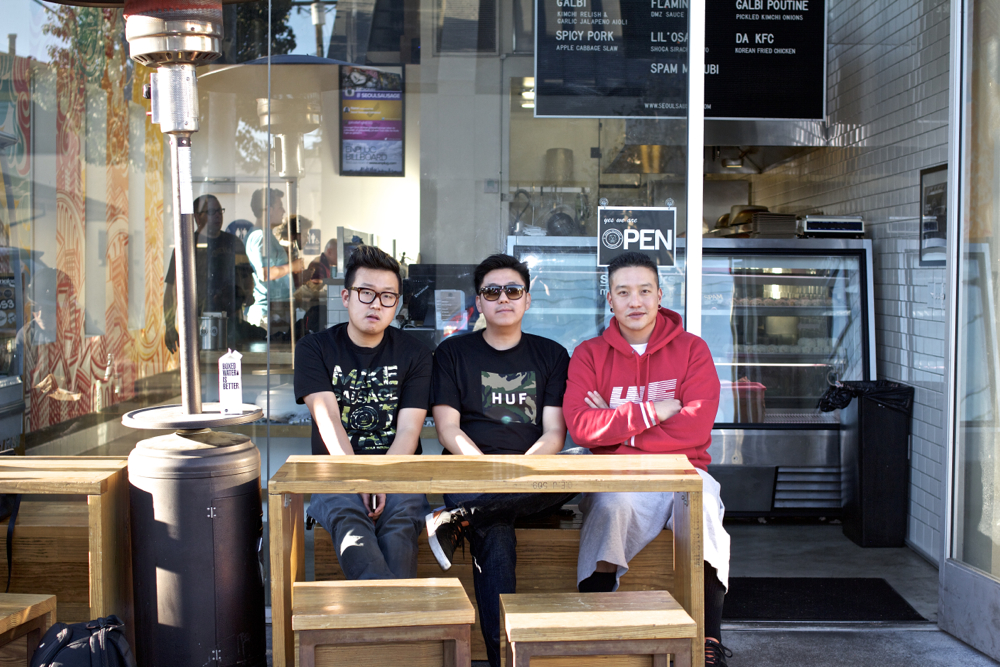 It was only a few years ago when a little known catering company called Seoul Sausage Company ventured into the world of restaurants and food trucks almost simultaneously. Around the time that Chris Oh, Yong Kim, and Ted Kim had traveled through the United States, winning The Great Food Truck Race on Food Network. And shortly after, the trio was ready to open their brick & mortar on one of the hottest corners in town: Sawtelle. Everything seems to come together well for Seoul Sausage, which had the mantra of bringing Korean food in a presentable package to the masses. Here now, Oh and the Kim brothers talk to Eater about the inception of Seoul Sausage, how it's progressed, and the stature of Korean food today.

How did Seoul Sausage Company start? YK: People have their theories. It really started in Chris' apartment. We started out as a catering company. We loved sausages. We loved Korean barbecue. Chris came up with the product. TK: Yong's Jeep was our O.G. food truck.

What was the early days like? YK: People kept putting up fake addresses on your Yelp page. And our personal cell phones ended up there, so we'd get calls at 3 a.m. We were like this mystery truck/store. TK: People thought we weren't a real business, and it just added to the hype. We once got one star because someone said we weren't a real location.

What was it like when you launched the truck? YK: We got a crash course in food trucks by winning The Great Food Truck Race, which started filming in May and June. By September, we had the truck, which was right after the show ended. In our season, they changed the show so that it was for people who didn't have a food truck, but just submitted a concept. For each of the seven episodes, we travel to one city, and one team gets knocked out. TK: We started in Long Beach, and ended in Lubec, Maine. We battled it every week, and were the last ones standing. We won a food truck and $50,000.

Was that the seed money for the brick & mortar? YK: Everybody thinks so, but we were already in construction here. We had down time, so we signed up, it was perfect timing. We really wanted to represent L.A. It just worked out perfectly that we opened right after the show.

What was the build out like? YK: This spot was the last spot we ever checked out, when we saw it, we all were like, this is it. There's foot traffic, professionals, families, UCLA students. We really knew this was it. TK: The build out was fairly smooth. It got a couple months because of the show but once we got back it was full throttle. 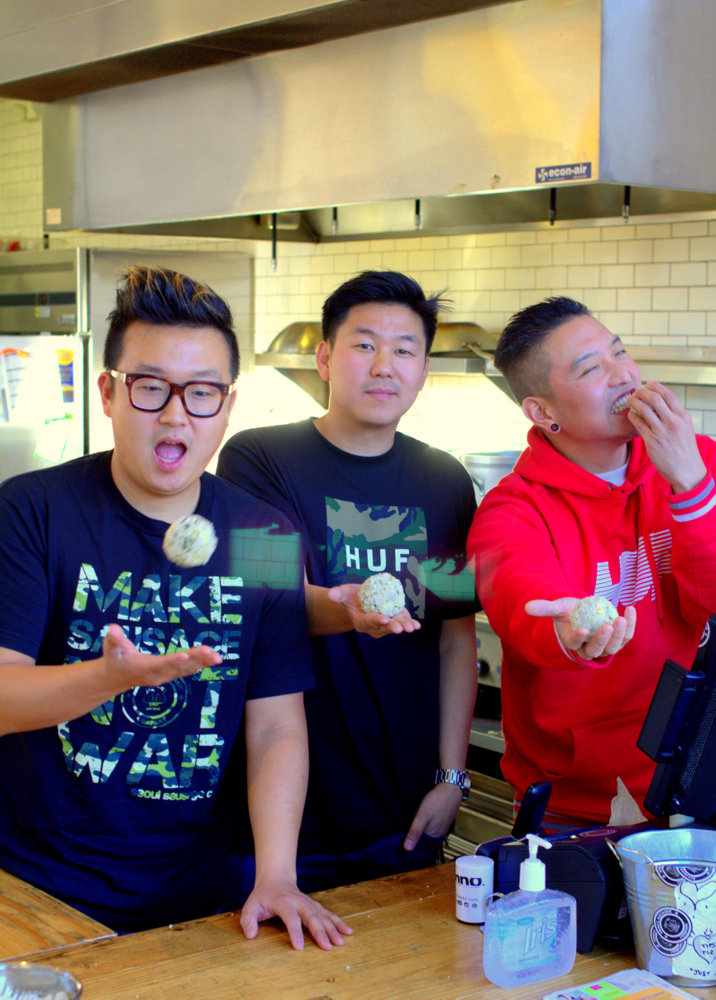 Was your thinking with the design? YK: The big thing for us was that we wanted an open kitchen. We wanted everything to be transparent. TK: We wanted it to feel big and free with the high ceilings. YK: We were always up front, we wanted people to interact, stand up, ask how our day's going. It's a good stop for people that wanted to eat alone. They could do that, or they could hang out with us. We have a really friendly staff.

How did you come up with the sausages? Chris Oh: I actually never made sausages. I learned on Youtube. People don't realize but we make everything in house, from scratch, from organic meat. No nitrates. If I took the meat out of the sausages and put them in a bun, we could charge $12 for them. People have this idea that it's like a $2 hot dog on the street. I just like to make food for regular people. I don't need to charge high prices, I just want to feed people good food.

What was the first month like? We had 8 people working in the back, with one fryer. We started out doing catering, then upgraded to a food truck. We also kept some specials on the menu, like the Korean Fried Chicken. People got so mad that they couldn't have KFC. It really showed Chris' depth as a cook.

How did you come up with the rice balls? YK: It was a result of the show. We were trying to make tater tots, but they didn't work. We had all the ingredients for kimchi fried rice, so we fried them up. They took us all the way to the finale. We rode that ball hard. That became our thing, people wanted to get the balls. Sausages and balls, it became a new way to introduce people to Korean food. It's easy for people to understand. People don't know that they're tasting kimchi when you hide it in a ball.

And what about the rest of the menu, which is pretty small? It's all the food that we like to eat, like the curry ball, which I've been eating for a year straight. It's food that touch home. Korean food doesn't need to be complicated. The fried chicken and poutine, people love it and go crazy over them.

What about some early criticisms? TK: People complained that we didn't have beer. People love sausage with beer. It's a seating issue, we're such a small place. People have written: "Food great, service great, no beer. 1 star." Also, people complain about parking, but we have a free parking lot right next to us.

Has it felt like a year? YK: It's felt longer. I think it's aged us 15 years. 2012 was the best year we'll ever have, it was awesome, fun filled, a very big year. We had so many things from the store opening to the Scion partnership.

What's next for you guys? We're definitely going to have more stores, we want to do one next year, something near Downtown.

How do you guys feel about Korean food, and how you're representing the cuisine? Korean food is on the cusp, in terms of nationally. It's exploded in L.A., just not across the country. Everybody wants a Korean friend these days, from the nightlife, soju, communal drinking, and karaoke. YK: When I was working at the marketing firm, we'd have a staff dinner, and Korean bbq was the easiest choice. It just hit on all points, price, food, drinks. Why wouldn't you go?

And what else would you say is happening with regard to Korean culture in terms of how its influencing the mainstream? I'm sure Psy helped. Of course. I love the fact that he made it, instead of a pretty person. It's more authentic, it puts Korean people on the map. K-pop in general, a lot of customers are fans. The culture is fascinating to people. We've taken a lot of people to Koreatown.

Where do you guys like to eat around town? CO: Anything K-town. Toe Bang. Han Bat. YK: Han Bat for life. If they have a daughter, I'm going to marry her just to learn the recipes. 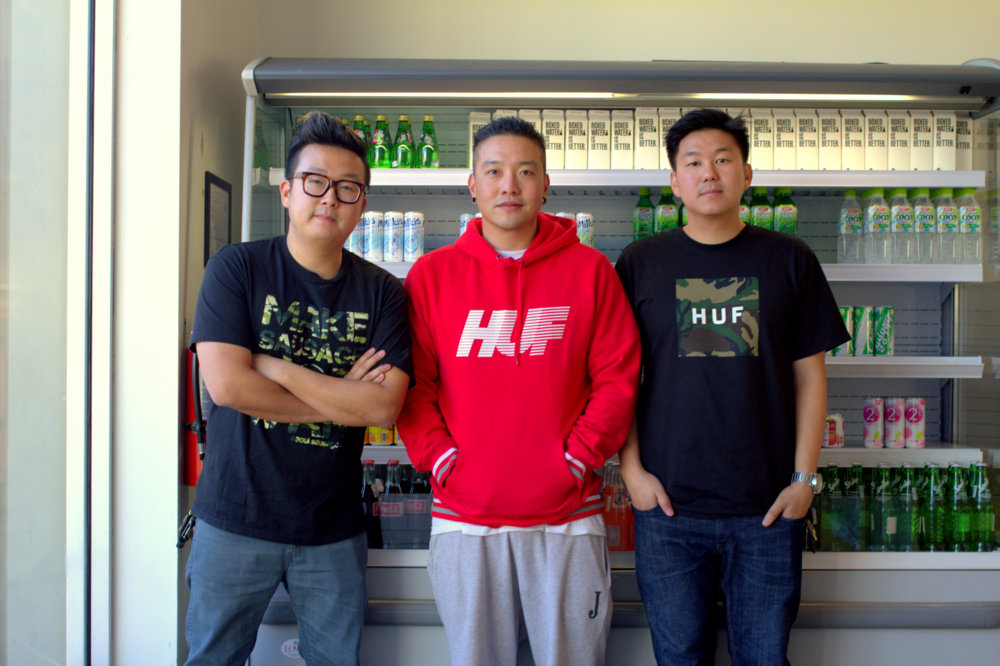