Because it's Whale Week, we're looking at how and where whales eat and drink from every angle. One thing all whales do is travel, and so we decided to talk to some of LA's top concierges about their experiences with whales. 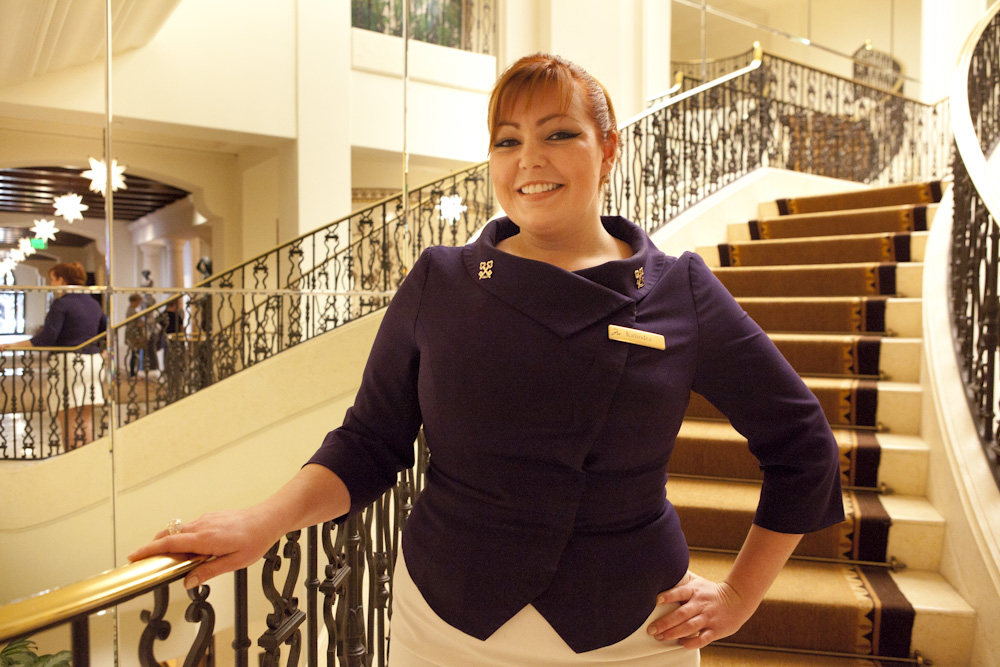 [Elizabeth Daniels, 2/01]
Kalindra Ashleigh has been a Concierge for almost 10 years; for the last four she has been with Beverly Hill's newest and most exclusive property, Montage Beverly Hills, home to Scarpetta and Bouchon Beverly Hills. Prior to joining Montage, she was with the historic Fairmont Olympic Hotel in Seattle and has also spent time with Four Seasons International. Here, she tells us about what whales want when they visit Beverly Hills.

How did you get your start as a concierge? I had just graduated college and realized that it was time to get a real job, something to do for perhaps the rest of my life. The only job that interested me was to become a concierge, but I really had no idea what exactly a concierge did... but I liked the idea of never knowing what the day would bring. Regena Falling, the Chef Concierge at the Fairmont Olympic (at that time), took a chance and hired me.

What goes into working as a concierge? You never know what's coming, what question you may be asked or what crises you might have to handle. You have to be prepared for the unexpected and anticipate all of your guests' needs or questions before they even know they have one... it's about always thinking one step ahead and constantly looking for ways to make a memorable moment or gesture.

Is there a difference in working in Beverly Hills (versus any other locations where you worked)? Working here has raised my definition of luxury. Being in the heart of Beverly Hills... we have an incredible clientele that travel a lot and have very high expectations. Rodeo Drive is just two blocks from the hotel... so, many of our guests come to shop ? and they all come to eat at only the best restaurants. We also host international travelers who are often visiting other cities in the U.S. ? which challenges us to be familiar with more than just Los Angeles. But, being a concierge means having an extensive network of contacts across the country.

What are the restaurants you are most often asked to make reservations at? Madeo, for celebrity sightings and then Spago and Mastro's because they're so close to us.

And what about clubs? We don't get many requests for nightclubs, but when we do, it's for Lure, Hyde Lounge and Drai's (at the W in Hollywood).

What is the most expensive request a guest has asked for? I once had a Russian couple who were visiting the U.S. for the first time and asked me to plan what they called "the trip of a lifetime" for them. That took a lot of planning, because the possibilities were endless. First, I had a car service take them to Santa Barbara to spend an evening at the Four Seasons Biltmore. The next day I had an Aston Martin delivered to Santa Barbara so they could enjoy a scenic drive as they followed the coast up to San Francisco. After a city tour and adventure in San Francisco, a car and driver took them to Lake Tahoe where they spent the next afternoon on a private yacht charter. The following day a helicopter tour of Lake Tahoe brought them to Yosemite National Park where they spent the night at the historic Ahwahnee Hotel located in the center of the park. After a tour of the wilderness in a private Hummer exploring all the sites of Yosemite the guests returned to Beverly Hills. Next on the agenda, I chartered a private jet to take them to Las Vegas where they enjoyed a helicopter tour of the Grand Canyon by day and stretch Hummer dedicated to their every need at night. After Las Vegas the jet took them on to Yellowstone National Park for a night and then back to Beverly Hills the following day.

What is the most outrageous request you have received? One summer afternoon I was approached by the security for one of our guests who said, "So, the Prince caught a shark this afternoon, could you have it shipped to Abu Dhabi?" Followed momentarily by, "Oh and we're leaving in twenty minutes." Unfortunately due to customs issues and the chance of the fish rotting in the mail room while waiting to be processed I was not able to ship the shark, but instead offered to have a taxidermist transform it into a trophy for the Prince. They declined.

Do celebrities ever stay at the property? We pride ourselves on our discretion.

Are there any regulars from abroad? Where are they from? We have many international travelers... from all over the world. The majority are from the Middle East, Australia, and Russia.

Is there ever a fee for your services? Never.

Have you been approached to work for an individual? Over the years there have been a few who have asked.

Does Montage have a VIP policy? All of our guests are VIP. We treat everyone like royalty.

Is there anything else you'd like to share? Once, a child of one of our guests, decked out in a king's costume complete with robe and crown, walked up to the desk and demanded a concierge costume for his pet parrot. There's never a dull moment.
·All Whale Week 2013 Coverage [~ELA~]