Brian Kalliel on Wining and Dining Whales at Mélisse

Share All sharing options for: Brian Kalliel on Wining and Dining Whales at Mélisse

Whales like wine. Whales like to dine. Herein, Eater features a prominent L.A. sommelier sharing his biggest bottle moments. What happened at the table, and more importantly, what did the whales drink? Right now? Brian Kalliel. 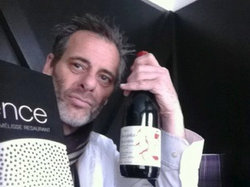 Brian Kalliel, Wine Director of Mélisse in Santa Monica, started at the French restaurant as head bartender. After serving some of LA's top whales for the last 15 years, he shares stories of the most expensive bottles he's poured to diners at the two Michelin star restaurant.

What's do most of the high-end diners order for wine? Almost always it's older Bordeaux and Burgundy, priced between $500 and $1,000 a bottle. We try to steer them toward the kinds of wine that they prefer, as well as the items that they've ordered on the menu.

Why do you steer them toward those wines? If a bottle is over $500, it usually has between ten and twenty years of age. It's probably a wine they don't already have in their own cellars, so they want to taste it. We try to steer them toward something they'll be familiar with. In the end we want it to be more about the actual wine than the price.

Any great stories on how whales have ordered wine? One of my favorite actors was in eating at the corner table for a quick getaway out the back door. A famous music producer spotted him across the room and decided to approach him. I was talking with the actor and noticed the intruder and intercepted him. He told me he wanted to meet him and I said, "Forget about it!" He said, "Could I send him a bottle of wine?" and I said, "Sure, but he only drinks a few things." So I went to the actor and said, "This guy wants to send you a bottle of wine." So, I picked out something really expensive. I showed him the wine on the list. He looked over the top of his glasses and said, "Well, that is rather expensive! I think I'll let him buy it for me/

Do people still order wines like Screaming Eagle? The cult wines are starting to fade away a little bit. They're more available now and they're just not as sought after. I would say that about 75% of what we sell is French wine.