Share All sharing options for: Christopher Doyle and Michael O'Dwyer of Tom Bergin's

Welcome to Lifers, a feature in which Eater interviews the men and women who have worked in the restaurant and bar industry for the better part of their lives, sharing their stories and more. 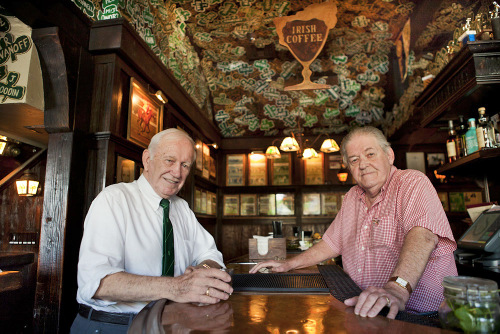 Christopher J. Doyle and Michael O'Dwyer have been the longest reigning workers at Tom Bergin's Tavern, a classic Irish pub in Mid-Wilshire first opened in 1936. The current building standing on Fairfax was built in 1948. The Tavern's 77-year run was punctuated by an eleven-month renovation last year. During the revamp, seasoned chef and co-owner Brandon Boudet (Dominick's, Little Dom's) was brought on to overhaul the menu from top to bottom. In one of the far corner booths, just before the lunch rush, Eater sat down with Doyle and O'Dwyer to listen to anecdotes and share a few laughs.

How long have you been working here? CD: Oh god, I started here in 1976 up until last year, when they did the renovation. I used to be a bartender but now I am a host and greeter for just three hours a week. MD: I've been bartending here since 1990. 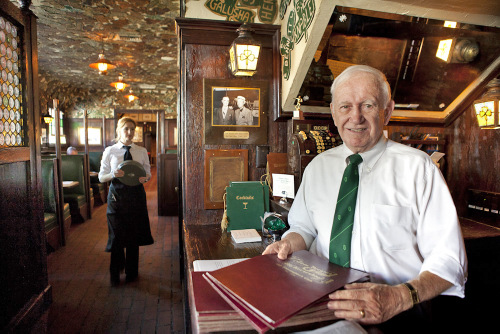 When did you guys start bartending? CD: I started bartending in Dublin when I was 17 years old, so over 63 years now. MD: I've been a bartender for 55 years, so I'm the new kid on the block. I started out bartending in Chicago and then moved out to L.A. in 1977 to pursue acting. When I came out here from Chicago, I was sitting at Tom Bergin's and told an actor friend of mine that if I didn't become a working actor in this town I would become a bartender here. He ended up becoming a big star. I've still done plenty of acting gigs over the years in this town.

Can I ask who that actor was? MD: Dennis Franz, of NYPD Blue.

What are some of the best memories you have of working here? CD: I loved Monday Night Football. Michael and I would put a jersey on of each team that was playing. Whoever lost would have to dance for the crowd. MD: If I lost, I would do a simulated strip show on the counters and even get dollar bills in my drawers. There were always guys ready to catch me in case I fell. I danced to "You Sexy Thing," by Hot Chocolate. 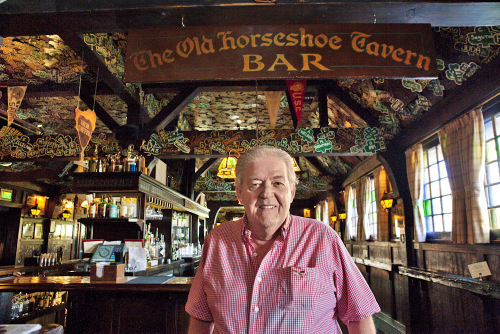 What was it like back in the '70s and '80s? CD: It's almost the same as it is now. You wouldn't be asked for as many different types of drinks. There were maybe three kinds of vodkas, and two types of gin. You wouldn't make any of these fancy drinks, just beer, shots of scotch, and martinis. The three martini lunch was common. MD: This place isn't trying to be an old time pub. It is an old time pub. It's not like Bennigan's or something. The character you see in the bar, including the bartenders, it's the real thing.

Who were some of your favorite stories of customers or employees? CD: We used to have most of the LAPD Wilshire division come by all the time, especially the detectives. There was one detective who would leave his gun with the hostess, but she wouldn't really like holding onto it while he was at the bar, so one night she wrapped it and left on the ice chest. Later in the evening, the detective almost went home with a block of ice instead of his gun! MD: One of the old bartenders here who's no longer here used to sip on gin when he was working here. When he wasn't looking I would water his gin down and just float some gin on top, all the cops would chuckle when they saw me pulling the trick.

What's better now after all these years of working here? CD: I can say that the place is run much better now. Back in the day it was more loosely run. And I say that the food is much better too, there's no comparison. Back in the day there were a few items that were good, but now everything is good. MD: It was more of a mom-and-pop shop but it's a little more organized and almost corporate. I think they'll find a happy medium between the two. The new owners are very nice people. Everybody I work with is great. 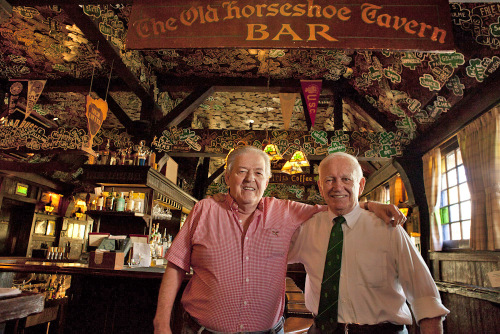 What do you think is great about Tom Bergin's? MD: What's great is that this place is a cross-section of the city. There's young guys, college kids, they break their teeth in drinking here. There are older people who come in — I've introduced many of them to each other and some of them even end up getting married. One of them even named a kid after me. We have straight, gay, rich, not-so-rich. Everyone gets along. I've been here for 23 years and I've only seen three fights, and one of them was really just a bitch slap.

Have you seen any fights in your day? CD: I've only seen one fight, and partially it was my own fault. One time two guys were having lunch, and they asked for two more drinks, and I probably shouldn't have served them after thinking about it. Five minutes later, one of the guys asked for the keys, and grabbed me by my tie after I refused. I was choking. I grabbed a bottle of beer and was ready to hit him when the owner at the time ran into the room, grabbed the guy and threw him out the back door. MD: I learned a long time ago, in my days in Chicago, that if you're going to wear a tie, wear a clip-on.

What do you guys do nowadays? CD: I only work a couple of hours on Fridays. I hang around and greet people for about three hours a week. It gets me out of the house, which is nice. These days, I actually wish I was forty years younger, because we finally have an owner that knows what the hell he's doing. MD: It's always been a good place though, and its the best job I've ever had in my life. I only work two or three days a week, maybe a half-shift at a time. Enough to keep me drinking coffee and smoking cigarettes. I've got all the money I'll ever need, unless of course I want to eat, sleep and pay rent.

What are your favorite drinks to make here? MD: Talk to the younger guys about that, our favorite drinks are pouring a beer. CD: A pint of Guinness, and we pour it right. With the new generation, they like to make a lot of different drinks.

What's the perfect way to pour a Guinness? CD: Gradually. Half way, you leave it to rest. And then after letting it sit, tip it and then fill the rest. You never serve it when it hasn't settled, until the collar is thinner than a quarter of an inch. MD: It takes four, five, six minutes to pour one. I always have two at half-mast so that you're ready. If someone's in a hurry, then they're in the wrong place.

What are some funny stories of people ordering drinks? CD: One time a woman asked for a mimosa. I made something and then I realized that I pulled a Perrier water with orange juice. I apologized immediately, but then she laughed and afterward we became friends. I know it's supposed to be orange juice and champagne, I just wasn't thinking. MD: Some places put egg white too, but I think it's one of the dumbest drinks ever. I don't want to work at any place where they have a lot of mimosas.

What do you enjoy most about bartending? MD: I've been a bartender for 55 years, but I've also been an working actor since I was 25. When I'm behind the bar, it's like I'm on stage. I can serve drinks, I get to tell stories, sing a song, do a dance. I want to have as much fun as anybody, and I usually do. I drive into work, and I think, who will I run into tonight? I used to remember names, but now I forget even my own name. I still remember faces though. One time this guy came in after not seeing him for ten years, and I was like, "Hey Will, how are you? You want a Beefeater martini, straight up with a twist," and he said, "How do you do that?" in awe. I said, "you're an important guy!" These people are important to me, if I get a four dollar tip instead of three, multiply that by the twenty regulars I see a week, and I make a living. We all like to be recognized and treated as special.

What are some of the best things to eat on the menu? MD: I can't afford to eat here! CD: My favorite thing is the corned beef and cabbage. The BLT is not bad. I've never had the fish and chips but they're very popular. MD: The french fries here are great. In the seven months I've been here since reopening, I haven't had one complaint about the food. The lamb stew is really good. I don't think the food is necessarily that expensive though. I'd rather pay $13 for a great corned beef than $10 for a lousy one. The people in the kitchen are pros. 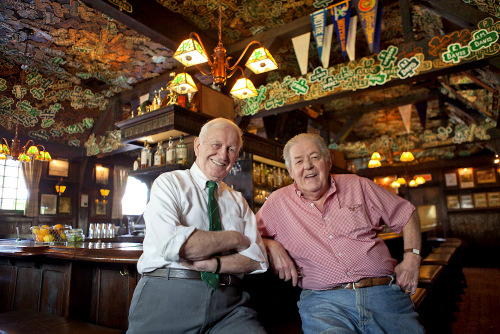 How much longer do you plan to work here? CD: I'm retired. What I do here, anyone could do, I think they're taking pity on me. MD: I think they're trying to move me out to pastures too. I only work a few shifts. Half-way through my shifts some of the other bartenders ask if I'm okay and I say, "what do you think I'm going to die on the job?" I may, but I want to die with my boots on. As an actor, as long as I can speak, I can act. As a bartender, as long as I got my wits about me, and I can move around the bar, I can tend bar. The day I can't, that's the day I retire.

How can I get my name on a shamrock on the ceiling? MD: If you do a real good interview. Make us look like heroes, then just maybe. Or if you come around here enough and become a regular. CD: They started doing this in the '60s. You can't read a lot of them because of the grime and cigarette smoke.

What's the most difficult thing about working here over the years? CD: Most difficult thing was going home. The traffic was terrible, it would take me an hour and a half or two hours to get home. MD: In the first twenty years, I don't think I had even twenty days where I felt like I didn't want to work. That's how much I enjoyed working here. I felt like I got paid to hang around with my friends. I never really found a hard time working here. CD: Neither did I.

What will you do today when you're off? MD: I'm going to go have a leisurely lunch and read the paper. It's my favorite thing to do. I live in Atwater Village, so I like eating at Foxy's, hide in the corner on the patio, smoke a cigarette and read the paper. Other than have sex every day, that's my favorite thing to do. After lunch I go home and have sex. CD: At sex I have my tea (in Irish brogue). MD: At six I have more sex! (laughing) CD: I go home and do the Times crossword puzzle, I love them.
·All Lifers Coverage [~ELA~]