Ricky's Fish Tacos in Los Feliz Down Until Further Notice

Share All sharing options for: Ricky's Fish Tacos in Los Feliz Down Until Further Notice 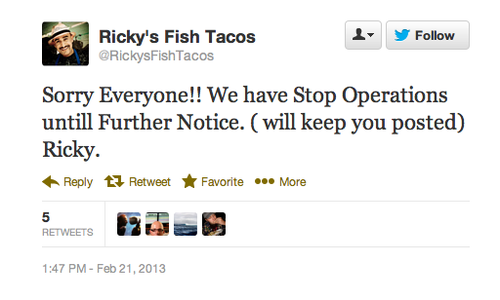 About an hour and a half ago Ricky Piña of Ricky's Fish Tacos tweeted that he would cease operations at his popular taco stand in Los Feliz until further notice. Though earlier today Piña tweeted business as usual, serving fish, shrimp, and lobster tacos from 11:30 a.m. to 4:30 p.m. Previously, circumstances had caused Ricky's Fish Tacos to shutter, only to re-open after a few days. However, Piña's second tweet ("I know, I guess is time to figure out Plan B :-)") hints that he might not be able to operate again in the current location. Have additional intel? Drop us a line.
·All Ricky's Fish Tacos Coverage [~ELA~]