Share All sharing options for: Bernhard Mairinger of Bierbeisl 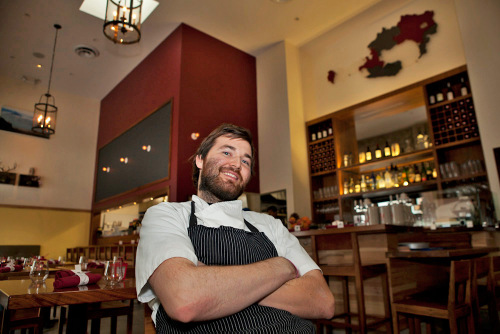 Chef Bernhard Mairinger wanted to open a place that he would frequent himself, a true Austrian restaurant that was both a neighborhood restaurant as well as a destination. One year later, his Beverly Hills' restaurant Bierbeisl is one of the hottest new spots in town. The former Patina chef has gained accolades from both local and national press, recently earning a James Beard nomination for Rising Star Chef as well as a nomination for Best New Restaurant. Eater chats with Mairinger and asks how life at the restaurant has been for the past year.

How did you come across the opportunity to open Bierbeisl? It's been a dream of mine for the last couple of years. I gathered a lot of responsibilities when I was working at Patina and felt ready to open my own restaurant. A broker friend of mine told me about the space in Beverly Hills. At the time, I was looking at other neighborhoods like Silver Lake and Larchmont. I wasn't sure it was going to work, but once I walked in, I saw a lot of potential. Both the dining area and kitchen were a good size. Within two or three weeks we signed the lease.

What else did you like about the space? I wanted to make sure that the atmosphere was right, so that people would get a homey feeling, like we have in Austria. I didn't want too many colors, something elegant but not too elegant. I still think that there's some fine tuning we can do.

What was the initial concept for Bierbeisl? Basically exactly what it is now, authentic Austrian cuisine. The interpretation is my own, a little bit more modern, not too heavy but also not too bland. I want people to see Austrian food for what it is, and so far people have really gotten it.

What were some of the challenges early on? It's a much different thing to run a restaurant that's already been in business, like Patina. When you come up with your own restaurant, you have to do everything fresh - the licenses, utilities, equipment, glassware, silverware, the overall design of the restaurant - we had to come up with everything. We worked with a small design firm that's been to Austria and Germany, and they were able to transform my vision.

How have the locals responded so far? They've been very supportive. There are a lot of regulars, a lot of people that have been to Austria, so they're familiar with this type of cuisine. I've developed a lot of personal relationships with our customers. That was the intention from the beginning, to be a local neighborhood spot, and place to hang out. In Austria, a bierbeisl is sort of like a tavern that's supported by everything local - the produce, meat, even the eggs and milk!

How about people that aren't as familiar with Austrian cuisine? Ninety percent of them are just surprised because they haven't had Austrian food, and most of them think it's amazing. When Austria was a giant empire it took over all parts of Europe, so there are influences of Italy, France, Germany, and Hungary. You get spices from Hungary such as curry, paprika, and coriander. Austrians sort of adopted the cuisines of all these regions.

How have reviews helped the restaurant? It's always an honor to be considered one of the 20 best new restaurants in America [by Esquire Magazine.] It's surprising especially with the type of cuisine we are doing here. It's so unique, you think they would choose something more for the masses because we're more one of a kind. We're very happy that people appreciate it. It's definitely helpful for business. I don't know if this means that Austrian food will be more of trend, but I think it has a lot of potential.

What are some of dishes that best represent the menu at Bierbeisl? The house-cured char is something we haven't taken off the menu. It's cured in brine for several hours, chopped like a tartare, then served with beets, pickled red onion, herbs, and fresh horseradish creme fraiche. It's very smooth, tender, and the horseradish is not too aggressive. I also recommend the veal schnitzel, which is served with a potato salad, proper breadcrumbs instead of panko, then given a nice golden brown crust that's dry - not greasy. It's not too heavy, it's something you could eat everyday, with the acid of the lemon juice balancing it out, along with the sweetness of lingonberries. And finally the sausages are great, especially the Käsekrainer, which is infused with Swiss cheese. Personally I think it's the best sausage in town. It's almost addictive, it's so good. After I left Patina, I went to Austria and had 4-5 in one sitting because I hadn't had them in so long.

Has it felt like a year already? Not at all, I can't believe it's already been a year, especially when we're so busy.

What other places around town have you enjoyed? I went to this sushi place on Melrose called Nishimura. Just outstanding sushi, some of the best I've ever had.

What's next for you and the restaurant? We're definitely looking at another restaurant, but something more casual. It'll be a place where you can catch a game. The food will be similar, but not as much of a fine dining setting. Similar flavors, a heavy Austrian influence where you'll want to have a snack or two. As for location, we're thinking Beverly Hills adjacent.
·All One Year In Coverage [~ELA~]