Is it Kosher to Call Out No-Show Diners on Twitter?

Have a restaurant or nightlife question that you'd like the Eater readership to tackle? Send it in to la@eater.com and it may just get the "Ask Eater" treatment. 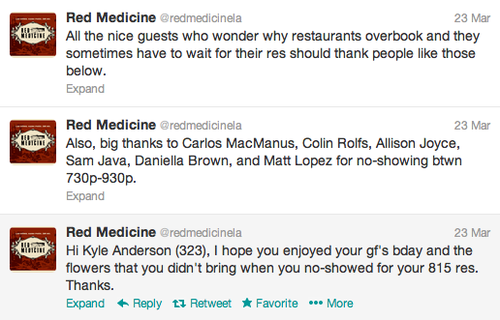 Over the weekend a reader noted that Red Medicine, the Jordan Kahn cheffed restaurant operated by Noah Ellis on Wilshire Boulevard, had sent out a series of tweets chastising no-show diners:

Did you see the bitchy tweets from Red Medicine calling out no-shows from tonight? Justice or unprofessional?

Eater reached out to Ellis for his thoughts on the tweets posted above. Basically, Ellis says no-shows really hurt business and that he has tried a variety of ways to combat the problem. He admits that out of frustration he blew up the no-shows on Saturday night.

Thoughts on no-show diners, making/canceling reservations at the last minute, and/or being called out about no-showing on Twitter? Hit the comments.

The word from Ellis: "It's always been a problem here (at the restaurant and in LA as a whole), but it's tricky -- those restaurants that overbook to protect themselves punish the guests who show up on time for their reservations, but not the people who no-show.

Invariably, the assholes who decide to no-show, or cancel 20 minutes before their reservation (because one of their friends made a reservation somewhere else) ruin restaurants (as a whole) for the people who make a reservation and do their best to honor it. Either restaurants are forced to overbook and make the guests (that actually showed up) wait, or they do what we do, turn away guests for some prime-time slots because they're booked, and then have empty tables.

We stopped overbooking about a year ago -- we saw that we could make up for the no-shows, but we'd seriously ruin a few experiences when guests had to wait 30+ minutes at the bar for their table. And notably, I remember a handful of times where those guests who had to wait were celebrating something, or a were a younger group who brought their parents from out of town to show them the restaurant; we felt terrible. So we made the conscious decision to eliminate the ghost tables and to set our turn times to a realistic length for making reservations.

Does this change mean that we won't run behind sometimes? Of course not. We get backed up, there's traffic, parking issues, guests who take their time, and a myriad of other reasons why a table might not be ready, but it's much more rare these days, and the times are typically less than 10 minutes. We've got a bad rap (much of it our fault), but I think our service, pacing, and reservation process has really gotten much better over the last year and we do our best to take great care of the guests who want to experience what we offer.

We tried taking a credit card on every reservation, but it hurt our business; there's a contingent of people who just won't put down a card, regardless of if they plan on coming or not. The ticketing systems are interesting, but we do most of our business a la carte, and I'm also not sure that we have the consistent demand to justify it. We could do walk-in only, but then if you're celebrating a special occasion having a meeting, or trying to have a nice night out, it sucks to not know when you'll be able to get a table. There's no winning.

So, long story short, on Saturday, we lost a bunch of prime tables, which (besides hurting our business, obviously) really wasn't fair to the guests who took a 6:15 or 9:30 reservation instead of the 7:30 or 8:00 they wanted. I was frustrated, so I blew them up. They probably don't know, and if they know, they probably don't care (or they would have come or called in the first place), but such is life."
·All Ask Eater Coverage [~ELA~]