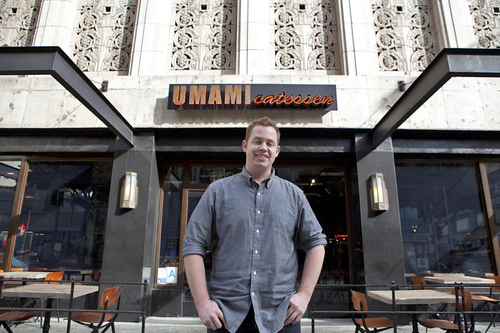 UMAMIcatessen opened with much fanfare just about a year ago in the sleepy part of south Downtown, along a stretch of Broadway where great theaters once stood. City councilman Jose Huizar heralded the restaurant as one of the first major developments to revitalize Broadway. Meanwhile, Umami's captain Adam Fleischman was intent on creating a concept that allowed chef-friends like Chris Cosentino to develop new dishes. Here now, Eater chats with Tyler Brown, Manager of Restaurant Operations for Umami, who explains about how it all came together, and UMAMIcatessen's evolution over the last year.

What was this space before? It was nothing really, it was vacant, but it used to be three different units, one of them being a cell phone store. 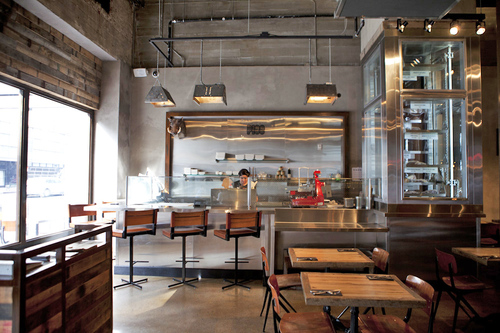 How did the concept come together? Adam [Fleischman] wanted to create place to be a playground for chefs. He wanted to re-define the modern American deli. If you go to a traditional deli, there's a lot of entrees that people don't really order, so we wanted to make place where people would actually order everything on the menu. We talked to Chris Cosentino about developing the PiGG concept, we developed the deli concept, with thick-cut pastrami and matzoh ball soup. We created a really interesting bar program with Adrian Biggs (La Descarga). We put in some amazing doughnuts. We wanted it to be like a modern day food bazaar.

How did the construction and development go? It took about a year to build the space out, which was the longest we'd ever spent on doing a build-out. Our internal design team worked with Derrick Flynn and Juliana So of SO|DA, who wanted it to be unlike any other Umami. They wanted to take a big cavernous place and make it feel warm and exciting, with lots of energy. There was a lot of R&D that went into the design, such as the honeycomb filters hanging above that dampen the sound. We went for an industrial look with natural wood accents to make it inviting.

How was it when it first opened? The place was packed. People were waiting up to two hours in line.

What was the main draw? People were initially drawn in by Umami and it was taking on something new. It was adding on new aspects like PiGG, it was something brand new to the area. One thing that's really unique is that there's something here for everybody. Jonathan Gold called our doughnuts the best in the city. Other people loved the pastrami or PiGG. The bacon-washed bourbon and other drinks drew in people who were into cocktails. 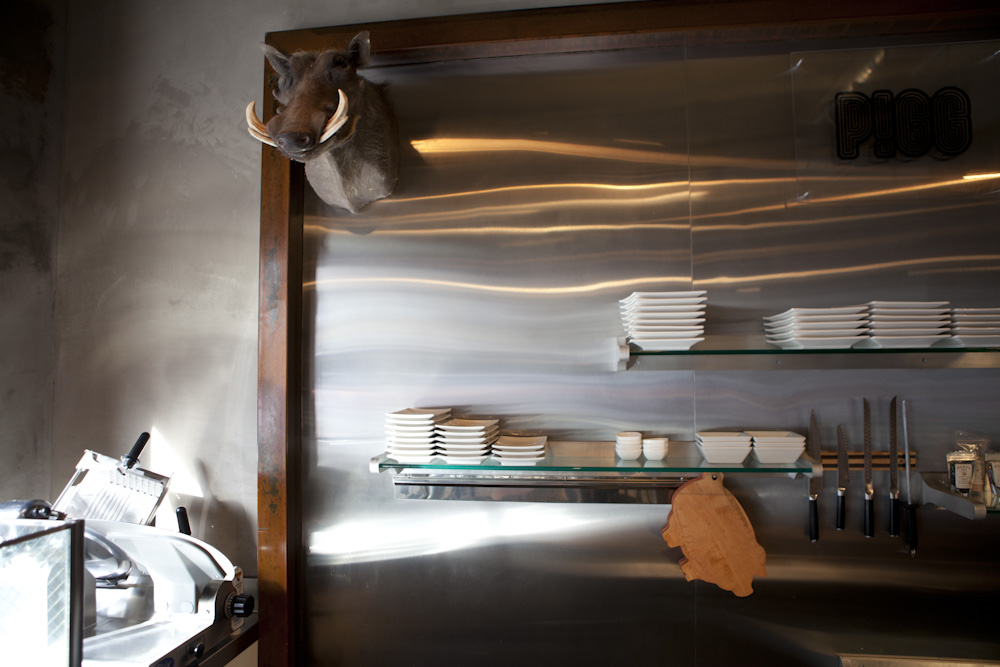 What changed in the first month or so? The big communal tables were initially out front, like a standing bar and waiting area, but it was causing too many tables to come off the floor. We wanted to accommodate more guests so we moved them just behind the bar area. We also added the outdoor patio when we got the permits.

And what changed about six months in? We initially opened with Spring for Coffee and eventually closed that for a new concept called The Residency, where we had chefs come in and do a pop-up within a restaurant. We also added TV screens at the bar so that locals could come by, have a glass of beer or wine and enjoy a game. We also changed the menu, adding a lot more seasonal produce. Every time we add new things to the menu, we get waves of new people coming by to try them. In terms of business, we leveled off a little bit as most restaurants do. We added happy hour and got some more bar business. We tried to appeal more to the immediate community.

What's the role of UMAMIcatessen within the rest of Umami? This has become a hub for developing new dishes here that have eventually been incorporated into all the other Umamis. It starts here and then starts trickling down to the other restaurants. Chefs get to play with all different kinds of food and equipment and test them out. It's the bleeding edge of what Umami's doing. At the time we opened it was the largest kitchen we had, and the first kitchen we had built specifically for us. Traditionally we take over restaurants that have already built-out kitchens.

What does better, lunch or dinner? Dinner does a lot better just because people come here to spend time and enjoy their meals. The lunch crowd draws people who work in the area, where they generally get a quick bite to eat. We're a dining destination at dinner.

What are the biggest challenges with having a unique concept, or something that isn't very cohesive compared to standard Umami? It's different but at the same time the clientele is interested, and they're eager to see the new things that are going on.

How's The Residency going? The Residency is sort of a pop-up for a rotating lineup of chefs. After Spring for Coffee closed, it became an opportunity to take advantage of a large space. Chefs come in for 8-10 weeks on Thursday nights, though we're moving toward every night of the week soon. Chef Micah's residency as been really popular — we're actually booked out until the end of April. There's just two seatings a night of twelve people, with an optional beverage pairing. It's very intimate because the chef actually prepares everything in front of the diners.

How did the press and reviews help business? Everyone wrote about us, which is nice. Jonathan Gold did one of his first reviews with the LA Times on us, which is a big deal. Every time we got press there was a new wave of customers. 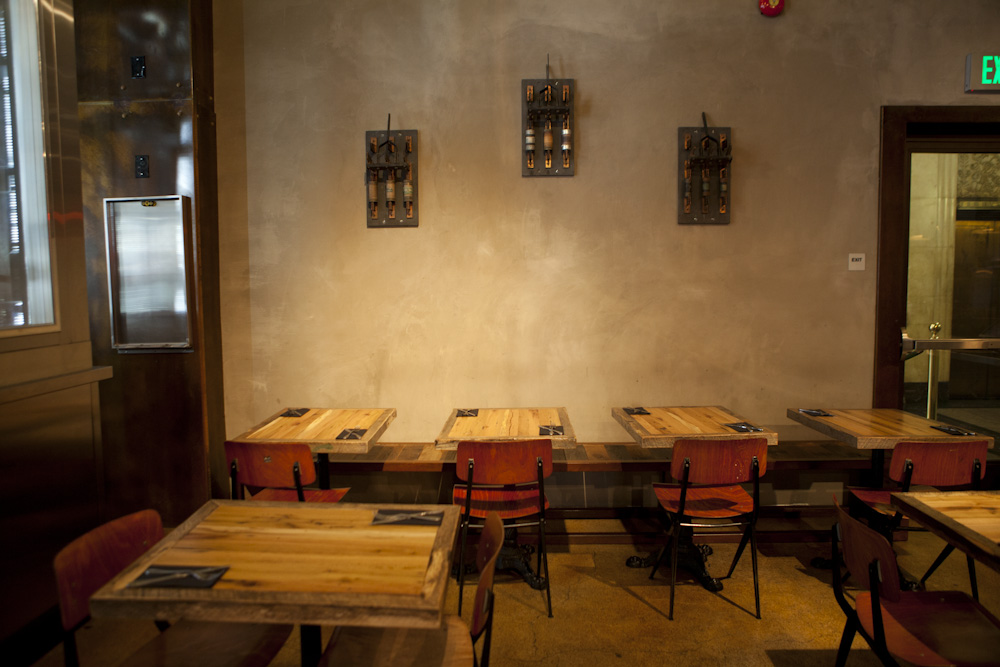 What are the best dishes on the menu? The staple Umami menu is very popular, as are the knishes. The pastrami, of course. The pig ears are pretty much on every table. People try it and fall in love with it. Also the shrimp burger, since that's the only Umami burger that isn't served anywhere else.

What's in store for the next year? We're going to continue to be a playground concept for chefs. There's always new energy here, and we'll be streamlining all the operations. Chris Cosentino still comes in every other month, and he's introduced a PiGG pen dinner that's a whole roast pork shoulder for eight people, and that's been increasingly popular.