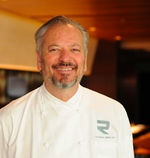 Chef John Sedlar of Rivera and the recently shuttered Playa plans to open a hispanic food museum Downtown called Museum Tamal. It's a longtime dream of his, and a temporary version of the project is set to debut for the public in 2014. His vision of the permanent exhibit space incorporates two restaurants within a 60,000 square foot building. In other news, partner/restaurateur Bill Chait intends on flipping the Playa space into a new eatery opening in May. Sedlar will not be involved with food. [LAW]