Eating Through the Entire Menu at Umami Burger

Share All sharing options for: Eating Through the Entire Menu at Umami Burger

In accordance with Burger Week, Eater bravely decided to eat through Umami Burger's menu, or at least the relevant parts in order to give readers a full sense of the restaurant's dishes, and perhaps a few off-the-menu items. 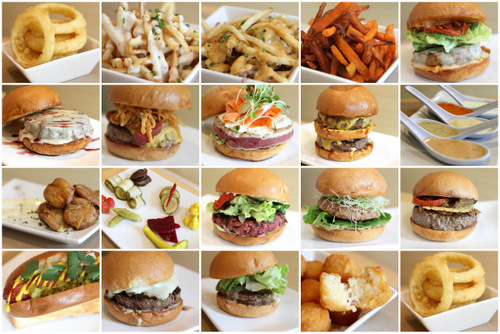 If there's a modern burger story in Los Angeles, it's got to be about Umami Burger. Adam Fleischman's once fledgling burger restaurant on La Brea (now closed) is poised for global dominance, a product that's refined, well-conceived, and translatable to a number of markets. Here now, a photo essay of nearly all of Umami's burgers (the ones available at every location), plus all the sides, because burgers should never be eaten alone.

Because this was a full burger rundown, the eating panel declined the salads on the menu. Only the burgers and sides were consumed for the full purposes of this tasting.

Triple Pork Burger: This burger had the heft of a full beef patty, but with seasonings more common in pork, almost like a merguez sausage. The chorizo gave it a nice smokiness, but the blast of gooey cheese was countered by crunchy butter lettuce, roasted tomato and aioli. Overall a pretty great non-beef burger.

Manly Burger: Incredibly over the top, with massive pieces of meaty bacon lardons, crispy fried onions, and melted beer-cheddar cheese that made it reminiscent of a Western Burger at Carl's Jr., only better. The beef patty didn't get lost necessarily because it played so well with the toppings. A worthwhile order for those looking for a mound of Americana.

Ahi Tuna Burger: Probably not too original, pairing seared ahi with avocados, but the tuna patty was pretty fresh and non-fishy. The wasabi tartare was the saving grace, giving it a nice spicy kick that worked well with the sweet brioche bun which almost resembles a Hawaiian bread bun. 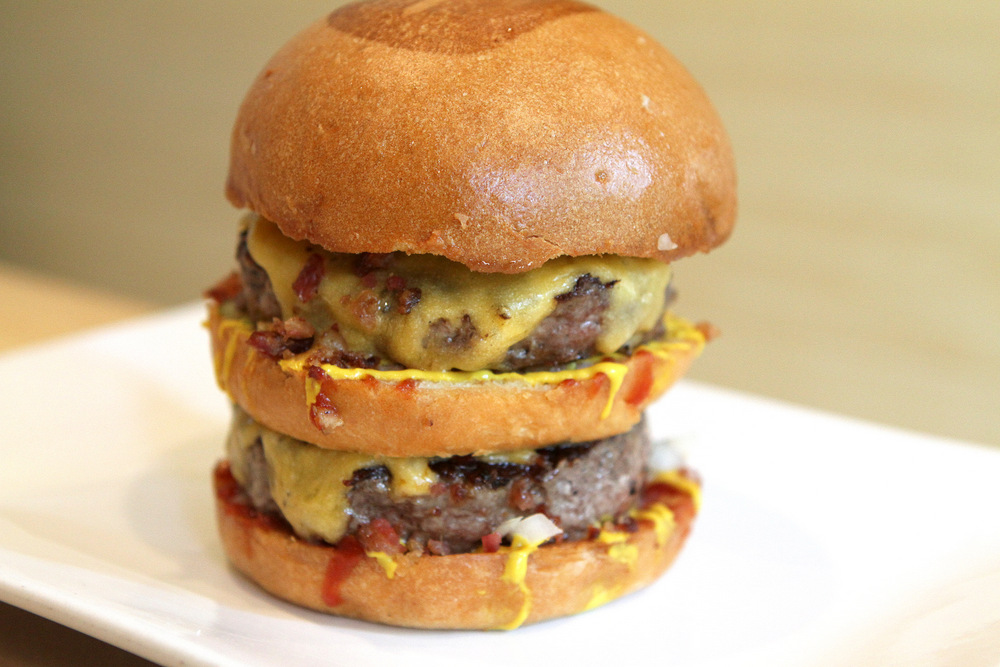 The B.U.B.: one of the newer additions to Umami's menu, this monster stacks two full-size patties with a slurry of bacon, ketchup, mustard and more of that beer-cheddar cheese. While definitely not for the feint of heart, it's essentially a very simple cheeseburger, almost a conceptual cross between a bacon-ized McDonald's cheeseburger within the confines of a Big Mac. The beef really shined in this burger, no surprise with double the portion.

Earth Burger: The Earth Burger is an earnest attempt to get as meaty as possible with vegetables and fungi, and for the most part succeeds. The gnarly pinkish patty looks like a raw slab of meat, which might be disorienting for some vegans and vegetarians. The flavor is initially strangely acidic, a credit to the beets, mushrooms, and edamame cooked in sherry wine. The texture is no-doubt mealy, almost crumbly, but holds together in the buns while roasted tomato, butter lettuce and truffled ricotta save the day.

The Greenbird: Umami's take on the turkey burger, and a respectable one at that. The dense patty held up to the avocado, sprouts and green goddess dressing, exuding a good amount of seasoning and turkey flavor. A worthwhile order for non-beef and pork eaters. 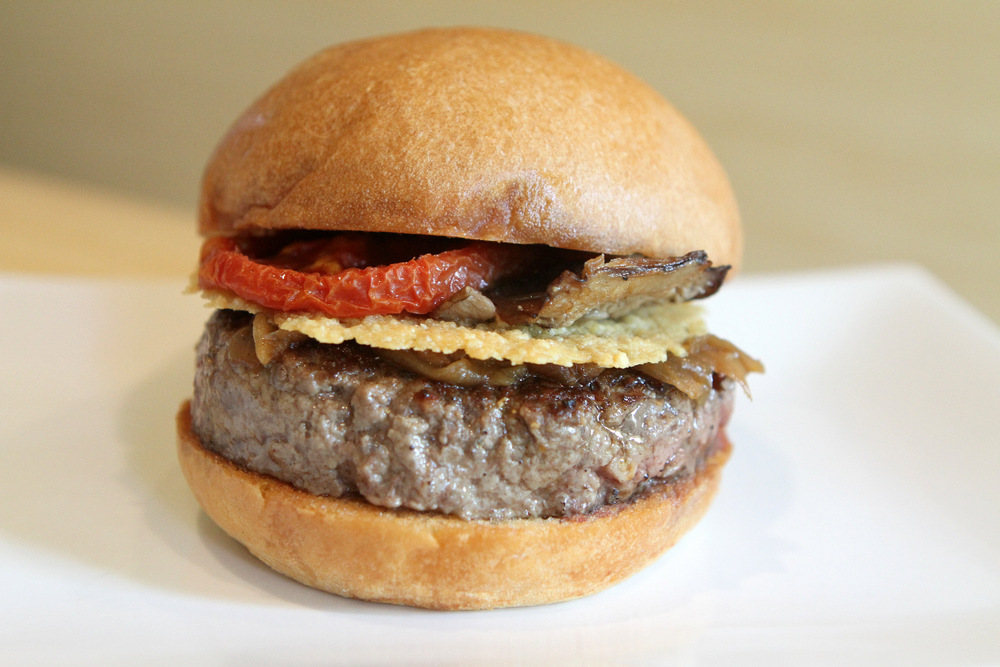 The Original: Purported the original Umami burger, this one is all concept, in an attempt to truly maximize umami flavor. A patty gets a nice sear (thanks to the Maillard reaction's browning, which produces umami), then caramelized onions and shiitake mushrooms, both rich in glutamic acid (the scientific term for umami). Above that there's a nice Parmesan crisp that's pretty uncommon in most burgers, lending a crisp and crunch while a roasted tomato rounds the thing out. It's quite rich overall, but one of the more thoughtful creations at Umami.

Cali Burger: A nod to the local flavor, this one is simple, with just American cheese, roasted tomato, butter lettuce, caramelized onions and spread, all for a flavor that's a bit like an In-N-Out burger and Fatburger, just "cheffed" up and more composed than those fat food variants. Nothing revolutionary, but nothing offensive either.

Hatch Burger: A hatch green chile burger that's an ode to the popular Southwest burger, this one has an abundance of cheese that overwhelmed the smokey, savory hatch chile for the most part. With just garlic aioli as the other topping, this one is a little difficult to complete on its own.

Port Stilton Burger: No longer on the menu, but pretty much available upon request, this burger was on the original Umami menu. A thick covering of melted stilton cheese gets a glazing of port wine sauce for a simple, and extra-rich burger that gets to the point.

The Umami Dog: Yes, this isn't a burger, but it still needed to be tasted. The dense Akaushi (Japanese wagyu breed) link tastes extremely beefy and dense, not falling prey to the toppings of mustard, relish, and onions. The cilantro is probably unnecessary but makes it look pretty. The split roll popularly used for lobster rolls is a terrific vessel, buttery and hefty in its own right.

And now onto the sides... 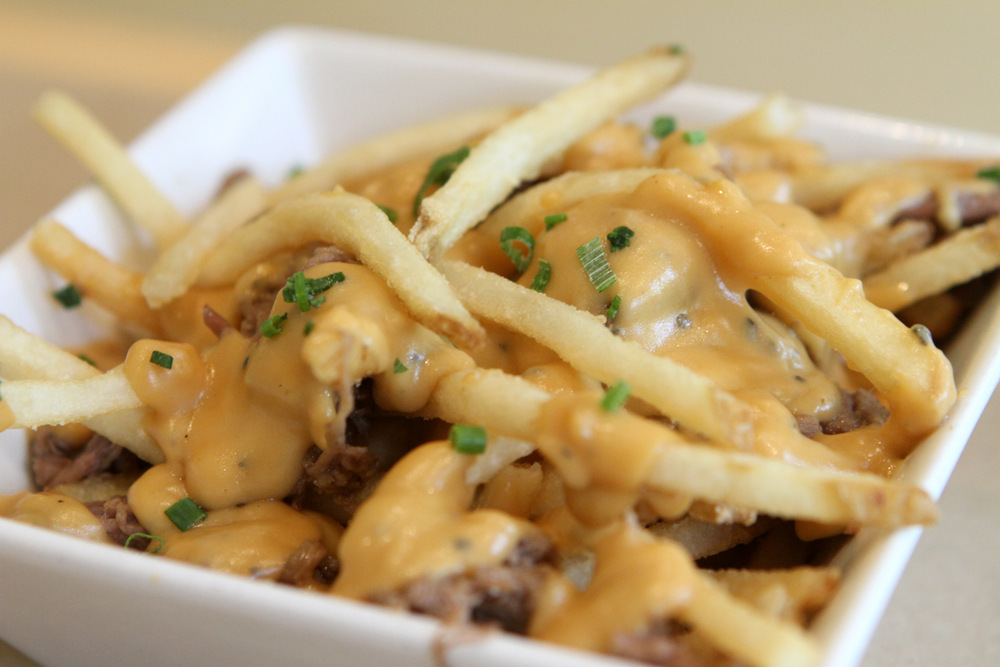 Smother 'em fries: Fries are all shoe-sting and the diner can add additional toppings. This version comes with gravy and short rib bits that don't get lost in the thin fries. They're a bit salty for the most part, but addictive, especially when served before the burgers.

Cheesy tater tots: Another off-the-menu item, think of these like a poor man's arancini (risotto balls), or maybe a rich man's tater tot, with a gooey, cheesy interior.

Fried pickles: Using the house pickle wedges, these are expertly fried and served with the jalapeño ranch sauce for a salty-tangy crunch.

Truffle 'em fries: These gooey fries are the gussied up version of In-N-Out's cheese fries, with thin fried potato sticks that stand up to the fat. Truffle flavor is pretty faint for the most part.

House pickle: A very good spread of house-made pickles, this is a near-essential order for things that will counter the incredible richness of the burgers. The pickled okra is a standout.

Tempura onion rings: The slightly tangy, malty flavor? That's from Mickey's malt liquor, which is used in the batter of these slightly crisp tempura-fied onions rings. They're served without sauce.

Needless to say, a few thousand calories were consumed by each taster. Umami's flavors represent a polished burger experience that's been able to maintain consistency despite growth across L.A., San Francisco, and now New York and Miami.