Sang Yoon on the History of the Father's Office Burger

Share All sharing options for: Sang Yoon on the History of the Father's Office Burger

The Father's Office Burger, possibly one of the most divisive and beloved burgers in LA, was conceptualized by Sang Yoon, chef and owner of Father's Office. After leaving the world of fine dining, Yoon wanted to open a very simple, casual restaurant with great beer and bar snacks in the vein of Spain's tapas bars. One of the original menu items was a burger, though it was unlike any burger anyone had ever created. Some argue that Daniel Boulud's db Burger was the burger that launched the current gourmet burger trend, but it was actually Yoon's creation at the original Father's Office on Santa Monica's Montana Avenue that did it.

Since then, the burger has received accolades and been reviled because of the restaurant's very strict non-modification policy, which prohibits substitutions or additions such as ketchup. Here now, Yoon talks about the creation of the burger, its essential elements, and some of the controversies that have surrounded it over the past thirteen years. 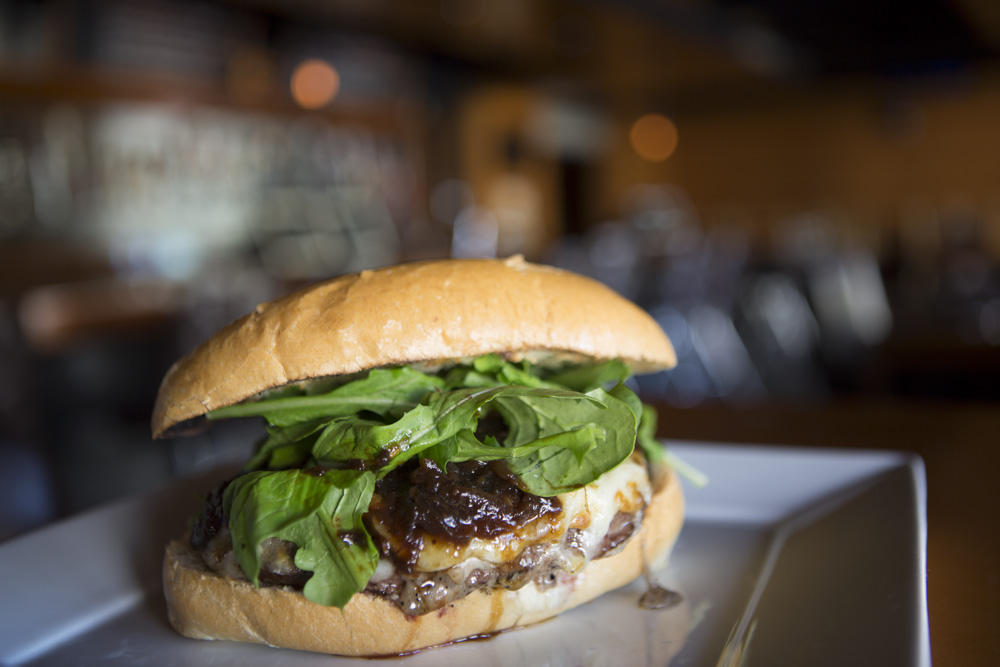 Yoon on the culinary inspiration of the burger: "I started with French onion soup. When I made the FO burger, there weren't any gourmet burgers. There wasn't anything to measure this against in the burger world. The base inspiration was a beef broth, not so much a burger. It was about highlighting the flavor of beef. Think French onion soup — beef broth, caramelized onions, gruyere."

Yoon on why he used dry-aged beef: "I thought about how to get the best beef experience, and that was a dry-aged steak. When you age beef, it concentrates the flavor, makes it a little more gamey and makes beef the star of the burger. At the time, burgers mainly used filler ground beef that you'd slather with condiments. I wanted it to have its own character."

On the subject of toppings: "I chose arugula and blue cheese because it punctuates the flavor of the beef. It all came about when I was trying mentally to not create a burger."

Why Yoon opened transformed Father's Office on Montana Avenue: "It opened in 2000. If you liked beer it was one of the few places to get craft beer in the city, but it was a dumpy old beer bar with no food. I installed a tiny kitchen in the back."

On the initial menu at Father's Office: "It was originally really small bites, like classic Spanish tapas, which made up 90 percent of the menu. It was supposed to be drinking food, but back then the idea of tapas was very new to people. Most people didn't think it was worth eating at a bar."

On the originality of the FO Burger: "It was on the original menu. No chef ever did anything in the burger world. People originally pitted it against Daniel Boulud's d.b. burger but that was three times the price. We're good friends and we talked about it — his burger came out about a year after I did mine. Around 2002, Esquire did a story about who was the true burger king — I came in first and Daniel came in second."

On FO's influence as a gastropub: "Daniel eventually went on to open DBGB, a gastro-bar concept that he modeled after Father's Office. When he came out to FO, he said he really wanted to do something with a beer and sausage focus and had a bunch of guys come out and work with me. Father's Office was way ahead of anything in New York at the time. There was nothing in the country at the time that was operating under the term, 'gastropub.'"

Starting with the bun, Yoon goes into the elements of the Father's Office burger: The same as the original question — I didn't want to start with a burger, I wanted to use a different approach. I didn't use any point of reference, so I used a bun that had a slightly crunchy texture. This bun doesn't have a lot of character, it's almost bland, but that allows it to absorb the flavors. We toast it with some garlic butter. I liked the oval shape because visually it didn't look like a burger."

On the FO Burger's meat and grind: "It's 100% chuck, dry-aged in our own facility. No one does this — it's a major ordeal to age your own meat for burgers. A lot of other places add dry-aged trim to their patties. These days, with the legality with ground beef, and all the controls around it, it's cleaner, more efficient, more consistent and predictable to age your own. The meat to fat content averages 80/20. You can't really get specific, so that's the target."

Yoon on the best way to cook a burger: "The charbroiler is my preferred method because it gives it the deepest flavor. When you drop a burger on the griddle it can't get quite as hot. If you're using leaner, cheaper meat, you're better off on the griddle because the fat's not going anywhere, it's just pooling there. When you use the charbroiler, the excess fat drips away."

On his own burger consumption: "I never eat it anymore. I make sure the parts are right, but I don't sit there and eat the burger, maybe once a year at most. I think it's best when cooked medium rare to medium, like a steak, it needs to be juicy."

On Yoon's infamous non-modification policy and how it started: "It came about because at the beginning the kitchen was tiny, almost like a phone booth. We didn't have an expansive menu or pantry. We just didn't carry a lot of things, so we couldn't accommodate substitutions. "

Yoon on the reactions of people to the non-modification policy: "At the beginning people got belligerent about it. Now it's kind of a trend for places to tell people that modifications aren't allowed. Really it was us just trying to work with something small, it wasn't about ego."

Why the policy eventually worked: "Eventually though, it became obvious that this was a dish, not a blank canvas. I was young at the time, just 29 and I owned my own restaurant. I had only worked in fine dining my whole life so I thought, this is something I've put a lot of work into. At the time people were just used to getting their burger their own way — it was just the culture that existed at the time. But if you serve something a different way all the time, then how do you have the same experience? It's hard to really relate to an experience at a place like The Counter — it's like a salad bar. I realized that the only way to get people to have the same experience was to be strict about the no-modification policy, even if it came at the risk of pissing a few people off."

On trying to understand customer reaction: "I know it came across as soup-nazi-ish, but we only made one product. We just couldn't provide another choice, and people are used to choices. I understand the culture."

On the subject of ketchup and other condiments: "Nothing's wrong with ketchup. First of all, I didn't have it at the restaurant. It's also a really strong flavor and didn't belong on the burger. With fries, I served them with aioli, which was a very European thing to do. Now it's caught on, but I think I took a lot of bullets for people in the industry."

On what makes a good burger: "I don't go eating a lot of burgers, but I tend to like the ones that are really simple, the ones that mimic the principles of mine. You don't need a lot of ingredients, it just needs to be really well thought out, a really well-edited dish. If you have too many ingredients, you convolute it. You want to use good quality meat, season it properly and use ingredients that highlight the flavors."

On the future: "There's the Helms Bakery project with Sherry Yard that we're working on, but other than that nothing. I try not to do too much at once. I don't know how people open multiple restaurants at once."
·All Father's Office Coverage [~ELA~]
·All Burger Week 2013 Coverage [~ELA~]