Now You Can Get Married in the Denny's Wedding Chapel

Share All sharing options for: Now You Can Get Married in the Denny's Wedding Chapel 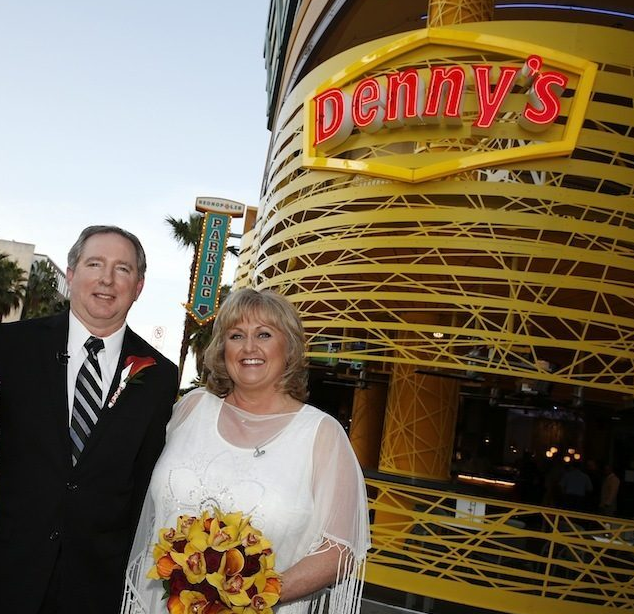 NEONOPOLIS—Denny's serves up more than pancakes in Vegas. The diner chain has opened a wedding chapel inside the Neonopolis and has already married a couple. Eater Vegas reports that Nancy Levandowski and Steven Keller were the first couple married at the chapel. Now, anyone can pay $95 to get married at Denny's. Included in that price is a Pancake Puppie wedding cake, "Just Married" Denny's T-shirts and full use of the wedding chapel.

THE BELLAGIO— Also ringing in at just $95 is a two-hour cooking class taught by the Bellagio's chefs. Each guest gets a personal cooking station with already-prepared mise en place, along with a step-by-step demonstration with an executive chef. First up is chef Edmund Wong (Tuscany Kitchen).

OFF STRIP— A brand new nightclub opens tonight off the strip. NV Nightclub and Afterhours can be found at 3355 Procyon St. (formerly the site of the strip club Scores) and offers 26,500-square-feet of DJ booths, VIP sections, bars and bottle service.

MONTE CARLO—The tired facade of the Monte Carlo is getting a facelift, larger footprint and at least one new restaurant. The Double Barrel, an almost 9,000-square-foot restaurant is guaranteed to take over the front of the resort and casino. Construction will include increased indoor space, big enough for four other tenants; most likely this will be a mix of retail and restaurants. The expansion will 25,000 square feet to the Monte Carlo's overall footprint.