This special crossover feature with Curbed LA and Racked LA looks into a unique cult called The Source Family, whose quirky vegetarian restaurant in Hollywood became the originator of the spiritualized vegetarian restaurant, long before tempeh, quinoa, and vegan were household words. 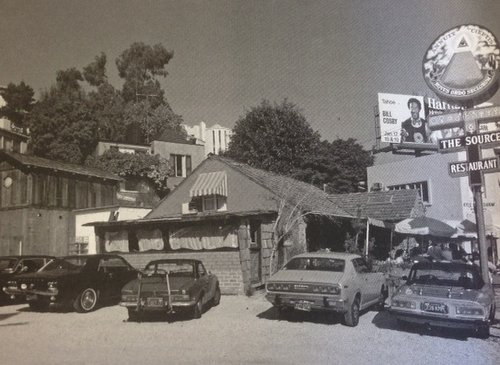 The Source Restaurant, Sunset Blvd. (Credit: The Source: The Untold Story of Father Yod, Ya Ho Wa 13, and The Source Family)

There was once a restaurant whose employees were tight-knit, so entangled, and so beloved that they became a family, and eventually a cult. That restaurant was The Source, a local L.A. legend that began on the Sunset Strip in the late 1960's when a man named Jim Baker took on the eponym Father Yod. The former Marine, jiu-jitsu master, accused murderer and quasi-spiritualist learned ideas from guru Yogi Bhajan, and eventually took on a persona that's only possible in L.A. 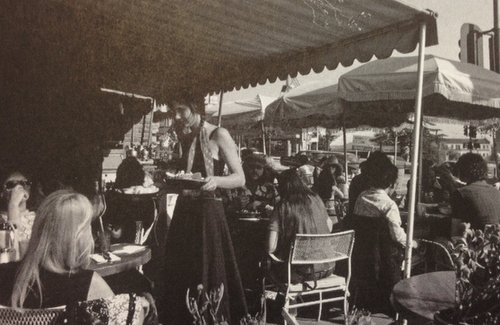 Outside the patio at The Source Restaurant. (Credit: The Source: The Untold Story of Father Yod, Ya Ho Wa 13, and The Source Family)

The Source restaurant (present home to Cabo Cantina) was one of the first popular organic vegetarian restaurants to be adopted by Hollywood A-listers, with the likes of Marlon Brando, John Lennon, Warren Beatty, and Julie Christie as frequent diners. There's even a scene in Annie Hall where Woody Allen orders a plate of "alfalfa sprouts and mashed yeast" on the patio. The spiritualization of the restaurant hadn't been part of popular culture for some time, though modern examples like Cafe Gratitude, with its feel-good messages and wholesome aesthetic, have to credit The Source as an archetype. 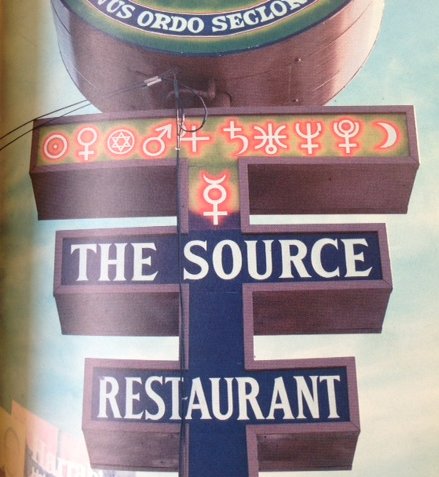 The reaches of The Source extend to many other arenas. The commune's improvisational, psychadelic house band recorded more than 60 full-length albums; the long, flowy robes of the women and over-the-top white suits of Father Yod have inspired fashion designers; and the commune's real estate holdings in the Hollywood Hills presented a distinct context for its existence.

A new documentary released this past weekend, and currently on view at Cinefamily, offers a perspective on The Source, however herein lies details on how The Source influenced today's modern vegetarian and organic restaurant scene in Los Angeles.

According to former members Isis Aquarian and Electricity Aquarian (no relation, they legally changed their name after joining the commune), Father Yod had taken over a former hamburger spot on Sunset and impulsively named it "The Source," as if "something else were speaking through him." 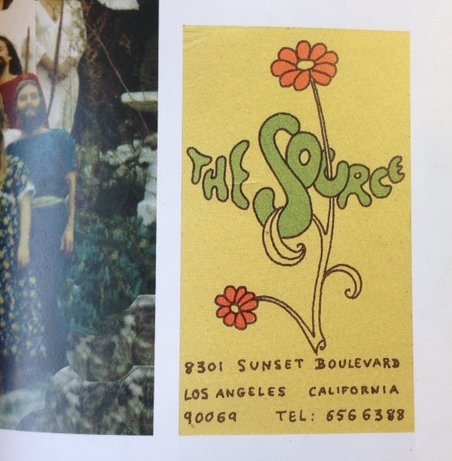 At the time, Yod had been able to convince a hiker he had met on the Calabasas trails to loan him $35,000 to open a restaurant based on the "dietary wisdom found in the teachings of Jesus Christ as revealed through the Essene Gospels of Peace." That means a vegetarian menu of organic salads, soups, fresh juices, and desserts. The Aware Salad was an early favorite, which contained carrots, beets, cucumber, romaine, avocado, alfalfa seeds, red cabbage, tomato, sunflower seeds, and pignoli nuts. A multitude of fresh juices included flavors like apple, beet, and pineapple. The Magic Mushroom was another popular choice on the menu, consisting of mushrooms, seaweed and sprouts. 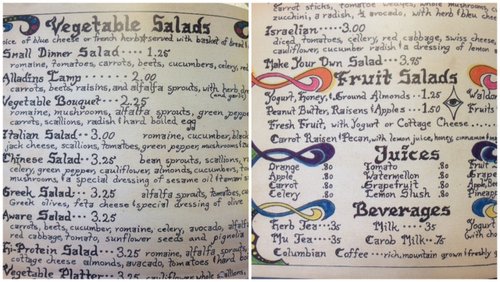 Early menus at The Source Restaurant (Credit: The Source: The Untold Story of Father Yod, Ya Ho Wa 13, and The Source Family)

The Aquarians give a picture of what it was like to experience The Source in their book:

"Food were 'consciously prepared for the highest vibration,' and served by hip young women and men with long hair who radiated health and serenity. Jim [Baker] transformed the fireplace in the dining room into a waterfall, and he would light candles over it. The melted wax made colorful, psychedelic designs on the mantle. The Moody Blues, Jethro Tull, or Zen meditation music played in the background.

The food at The Source was popular, with reports claiming that the restaurant earned daily sales of $10,000 during its heyday. The figure seems unrealistic — even adjusted for inflation, that would be nearly $40,000 in today's dollars. But the notion that the restaurant would earn that much gave credence to support The Source's growth and lifestyle. Father Yod, who sported a long white beard and crisp white suits, was known to drive around in a large white Rolls Royce. As young men and women joined the family, Yod purchased a house in the Hollywood Hills where members of the commune lived to create a stronger sense of a utopian community, all supported by the profits of The Source restaurant.

The Source persisted for a number of years until the restaurant was sold in 1974 and moved to Hawaii. Shortly thereafter, spiritual leader Father Yod died in a hang gliding accident and the commune eventually dispersed.

In the end, The Source made its mark on Los Angeles as one of the first restaurants to promote raw, organic, and vegetarian principals for spiritual benefit. This dynamic was powerful enough to convince a few hundred people to adopt the lifestyle permanently, something few other restaurants can tout. In culinary terms, The Source may have influenced many aspects of the modern health food scene, with places like M.A.K.E, Crossroads, Cafe Gratitude, Elf and Native Foods as recognized purveyors of raw organic vegan cuisine. Also, one would be remiss not to consider the recent profusion of cold-pressed juiceries across the city.

Some of The Source's dishes are on offer this week at Cinefamily, where the back patio is serving up the Aware Salad and Magic Mushrooms while Thank You For Coming, the culinary incubator in Atwater Village, is offering dishes based on The Source Restaurant's recipes until the end of May.