The rumor was that Petty Cash Taqueria was supposed to open today after a week of trials, but the update now is that it'll be at least a few more days before the kitchen is ready. The project headed by Bill Chait, cheffed by Walter Manzke and Guillermo "Oso" Campos, cocktailed by Julian Cox, and overall curated by food writer Bill Esparza, is still putting the finishing touches on an ambitious project that promises to be one of the best Mexican restaurants to ever open in L.A.

It starts with Walter Manzke, whose curiosity connected him with Bill Esparza, who then took him to try Tacos Kokopelli, where Guillermo Oso Campos has been making some of the most inventive tacos in Tijuana, after working for some years in high-end restaurants in Mexico and a Michelin-starred restaurant in Europe.

The approach taken by Campos is based on Tijuana's street food culture, but expounds upon it by using traditional ingredients in an innovative way, with meats mostly prepared on a mesquite grill. Seeing the potential, Manzke and Esparza brought on Campos and together with Chait, conceived a new, refined taqueria that would take over the defunct Playa spot. 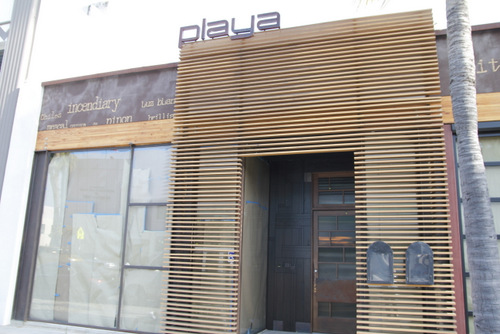 Outside Petty Cash Taqueria, pre-completion
Esparza's started by bringing in senoras from places like East L.A. and Huntington Park, getting them to prepare their masterful handmade tortillas that will be better than any other Mexican restaurant on this side of town. These cooks are also collaborating with Manzke in the kitchen, working the line and ensuring everything is in line with traditional flavors along the way. There's going to be a ceviche bar inspired by Manzke's tastes of Mariscos Ruben in Tijuana, where kanpachi ceviche and even pork ceviche will be served in stone molcajetes. Eventually they're planning a legitimate al pastor program employing taqueros from around town who know their way around a trompo.

Next came the tequila program. Though most places around town are doing expanded tequila and mezcal lists, the list at Petty Cash will introduce things that few bars around town can tout. First off there will be artisanal mezcals: bacanora from Sonora that are made with wild agave. Also, Sotol, which is a small-production distillate made with a plant similar to agave, called Desert Spoon. And then there's raicilla, a never-before-seen spirit from the state of Jalisco. These direct-from-producer spirits will be first introduced to the U.S. at Petty Cash Taqueria.

At the moment the taqueria is still doing rounds of preview dinners, though the space is still in development and won't be ready for a full debut until some time later next week.