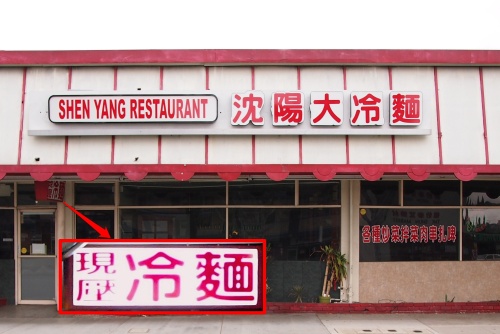 1) Monterey Park: Shen Yang Restaurant opened last weekend, replacing Saporous Grill. Management tells Eater they are unrelated to the fabulous Shen Yang Restaurant in San Gabriel, and Shen Yang San Gabriel has also confirmed the clear separation. As previously reported, an ABC license shows the DBA (Doing Business As) linked to Old Lazy Ox. The naming convention is nutty, but the restaurant's specialty is obvious (see signage): house-made "Chao Xian" (Korean) — style cold noodles available in a sweet and tangy soup, or a savory ("slaty") broth. Both are available without MSG, and an accompanying house chili paste brings up the spiciness to bibim naengmyeon levels. The restaurant's pasta machine was imported from China, and there are four beers on tap. Even more interesting is the availability of two styles of chicken bones, a Shen Yang local fave. 639 W Garvey Ave.

2) Alhambra: The Valley Boulevard branch of New Chong Qing has finally been put out of its misery. The San Gabriel Boulevard branch is chugging along, but both locations have been on a slippery slope for at least a year. A massive dump truck was observed over the weekend while the interior (which featured giant tacky ceiling fixtures) was obliterated. 1468 E Valley Blvd.

3) El Monte: Qi Lu restaurant is no more. Korea House BBQ, a chainlet with roots in the OC, is destined to open in its place. Oddly, no ABC license has been filed for the property. This is the third KBBQ restaurant to open in WSGV in five months. 10632 Lower Azusa Rd.