Chef Manouschka Guerrier, a private chef and cast member of Food Network's Private Chefs of Beverly Hills, posted a ridiculously long diatribe on Facebook yesterday about her horrific experience cooking at this is not a pop-up, the culinary incubator organized by Helen Springut and Helena Brown. Guerrier helmed the Tiago kitchen from April 25 to 28 and in the post she warns future chefs to think twice before signing on to participate. Right off the bat though, she discloses that she has never before worked in a restaurant kitchen. Below, her story.

Guerrier begins by describing the tactics used by Springut and Brown to convince her to do a four-day stint at this is not a pop-up's (tinap). Guerrier was promised a commissary kitchen to prep food, full service ingredient acquisition, and both front-of-house and kitchen staff. Springut and Brown were also supposed to handle the bulk of the marketing duties, ensuring that diners from around the city would fill the pop-up's seats. At the end of the day, she was supposed to receive a third of the profits after expenses. It didn't turn out to be that simple.

The pop-up lost its initial location at East Hollywood's Square One, and then lost its commissary. Guerrier writes,

"After Helen and Helena lost the spaces, that is when all the lies started pouring in. I was told they were going to get the A.O.C space and that I should prep to feed what I assumed would be up to 200 diners at my home. I said hell to the NO! Then Helen said she could get me Palihouse kitchen to prep in. That didn't happen. They finally got Tiago to be their host."

The environment and situation for Guerrier kept changing, but Springut insisted "that [her] appearance would go off without a hitch!" The whole enterprise seemed to rest on the fact that Guerrier thought Springut and Brown were supposed to do their part by arranging for ingredients. But this wasn't the case. Guerrier fired back asking,

"Wait a minute – you expect ME to invite people, prep, cook AND shop... what exactly are you guys doing?!?!" A very un-businesslike back and forth began as Helen responded that "I never said I would shop, I said I would order"

"If they can't handle the shopping or the 'ordering' I'm sorry but I'm out! I need to handle my business and this is no longer worth it to me. Helena [Brown] offers her apologies, states that her business partner [Springut] has a problem with embellishing facts and that her doing 'damage control' with all of their Chefs they have had come aboard is a weekly occurance, for me not to worry that she would handle the shopping."

In the meantime, there were issues getting produce and meat delivered to the restaurant and complaints about the lack of media coverage on the four-day pop-up. There was no mention of it on this site or any other major publication. Once it came to opening night, it didn't start well. Guerrier describes the kitchen at Tiago:

"Tiago seriously isn't a kitchen. It's a deep fryer, a flat top and 5 portable induction burners... 4 of which are the only ones working. The space is tight. The Tiago employee that I am obligated to use is basically a $100 a day dishwasher. The first day, while not exactly a disaster, isn't going along at all as I planned, I am STRESSED beyond belief!"

The rest of the pop-up didn't have any major hiccups (except the ineffectual dishwasher), though the nights were generally slow and most of the attendees were Guerrier's friends, not the outsiders and industry friends that Springut and Brown supposedly promised. When it came down to splitting the profits, Guerrier ended up with a mere $867 (which was only explained in detail after a breakdown of expenses was requested) for four nights of work, plus all the prep involved with putting together the four-night stint. Lesson learned. The entire 4,882 word rant is posted here. 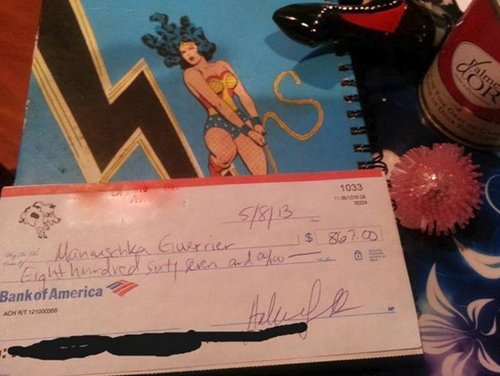 Springut and Brown have the following response to Manouschka's rant: "One of the nicest parts of doing this is not a pop-up is that we get to work with lots of different personalities and talent, and figure out who we work easily with. Mostly it goes well, but it's always a learning experience. We've had multiple chefs come back to cook with us - we think that speaks for itself."
·All this is not a pop-up coverage [~ELA~]